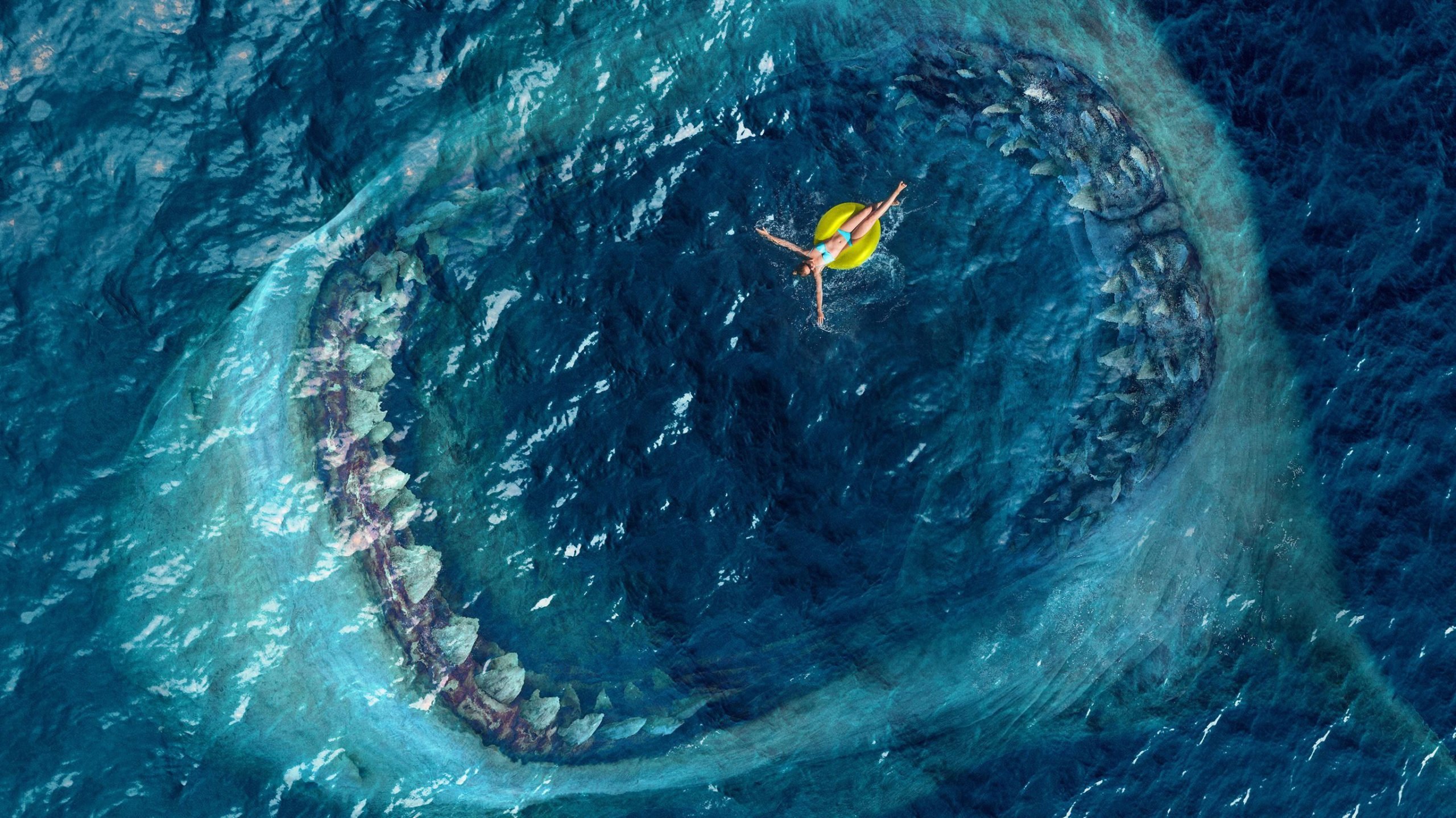 A scene from the movie The Meg.
Reading Time: 4 Minutes • Print this page
There are lots of myths surrounding the megalodon, the biggest predatory shark in the world. Here, we sort fact from fiction.

Megalodons are one of the most well-known species of sharks and for good reason: they are the largest predatory sharks to have ever existed. Their name, which translates to ‘giant tooth’ is no joke. Individual teeth of these animals could be 18 cm across their diagonal height.

Match this with a 16-metre-long body, including a 4.5 metres long head, a dorsal fin as tall as me and a tail nearly 4 metres high, and you’re looking at a shark of epic proportions. At their widest – from the tip of the dorsal fin to the bottom of their belly, they were over 4.5 metres tall. That is, you’d need a two-storey building to contain the enormity of their height, alone.

Megalodons are members of the absolutely fascinating and highly diverse Lamniformes order of sharks. Fossil records have identified 373 species of lamniform sharks. But the diversity of this family has ebbed and flowed and today, only 12 lamniform species exist.

Although small in number, they include the iconic great white shark, the unusual goblin and crocodile sharks, and the rare filter feeding megamouth shark. However, while often compared and distantly related, megalodons belong to a different evolutionary linage than great whites.

Further fuelling the allure of these sharks is that so little is really known about them, inviting the imagination to fill in the gaps. When it comes to things of such mind-blowing proportions, exaggeration of what is actually known. It’s hard to know what’s real and what is not about the infamous ‘meg’.

Although it’s exciting to think that an animal as incredible as the megalodon could still be alive and swimming in the ocean today, no real evidence supports this.

First of all, no megalodon fossils have been found to date these animals any more recently than the Pliocene, which ended a bit over 2.5 million years ago.

Secondly, megalodons lived in coastal habitats worldwide, across tropical, subtropical and temperate regions. Like our modern-day great whites, megalodons appear to have used nursery areas. Nursery areas for sharks are locations that provide some sort of advantage for younger (smaller) animals, giving them a better chance of survival when they are most vulnerable. This could be denser food resources, or protection from larger predators. It’s incredible to think that a predatory shark born at two metres in length would ever be considered vulnerable! But, the use of nursery areas likely would have pushed megalodons even closer to shore for at least for part of their lifetime.

Given the amount of time we spend in coastal environments, our love of looking for sharks and watching whales (see below), and the sheer size of these animals, it is highly unlikely that we would literally never, not even once, see one of these shark swim past. Even if it was just a baby.

The most recent estimates suggest that they were really well and truly extinct by at least 3.6 million years ago.

Did Megalodons live alongside of and eat dinosaurs?

While some sharks did exist at the same time as dinosaurs, megalodons didn’t evolve until well after the last dinosaurs (and their marine reptile counterparts, the ichthyosaurs, plesiosaurs and mosasaurs) died out some 65 million years ago. Instead, megalodons lived during the Miocene and Pliocene periods, between 23 to 2.5 million years ago.

Being gigantic in nature is hard work, which is why relatively few animals achieve this status. Most notably, maintaining a huge body requires a huge amount of food. Being the part of a shark that preserves the best, almost all of our current knowledge on megalodons comes from their fossilised teeth. Teeth also provide lots of clues on what these animals ate.

So, amidst all of the uncertainty and controversy that goes along with many of their other features, scientists are pretty sure of these sharks’ diet. It is thought that the shift from a diet of mostly fish, favoured by related species, to one based on more energy-packed marine animals is what allowed megalodons to reach their incredible size. They were likely highly active predators, although probably wouldn’t have ignored scavenging opportunities.

Also, along the lines of scavenging, embryonic megalodons are thought to have been intrauterine cannibals. That is, the baby sharks that developed quickest had a tendency to eat unhatched eggs and sometimes even their hatched siblings. This strategy helped even the babies of this species to be enormous.

Related: How to make a (scientifically accurate) megalodon sculpture

Were Megalodons the biggest predatory shark in the world?

Megalodons are thought to have reached lengths of around 15 metres, give or take a few, and weighed more than 50 tons. They were twice the size of the next largest lamniform sharks and close to three times the length of very large modern great white sharks. From their two-metre length at birth, megalodons grew at an average rate of about 16 cm per year, at least for the first 46 years. They are thought to have had a lifespan of at least 88-100 years.

In trying to grasp what the size and weight of a megalodon would have looked like, it’s easier to picture marine mammals – and whales, specifically. Megalodons would have been similar in size to adult humpback whales, and possibly a fraction heavier.

Speaking of whales, the megalodon was an apex predator. It helped to regulate populations of animals lower in the food chain, like whales. Since the megalodons extinction, whales have rapidly increased in size. There is a chance that if megalodons were still alive today, the largest animal this planet has ever supported, the blue whale, may not exist (or at least, not in its current form).

What killed the megalodons?

While we know approximately when megalodons went extinct, it’s not definitively known what led to their extinction. The current best (highly educated) guess is that it was a combination of cooling ocean temperatures and a flurry of diversification of other smaller, but highly efficient predatory shark species. In some cases, these new sharks could have outcompeted the large, relatively more cumbersome megalodons for resources. Cooling ocean temperatures would have restricted the range of megalodons to lower latitudes, while the sharks’ preferred prey were able to adapt to the cooler temperatures of the higher latitudes.