Echidna penises: Why they’re so weird 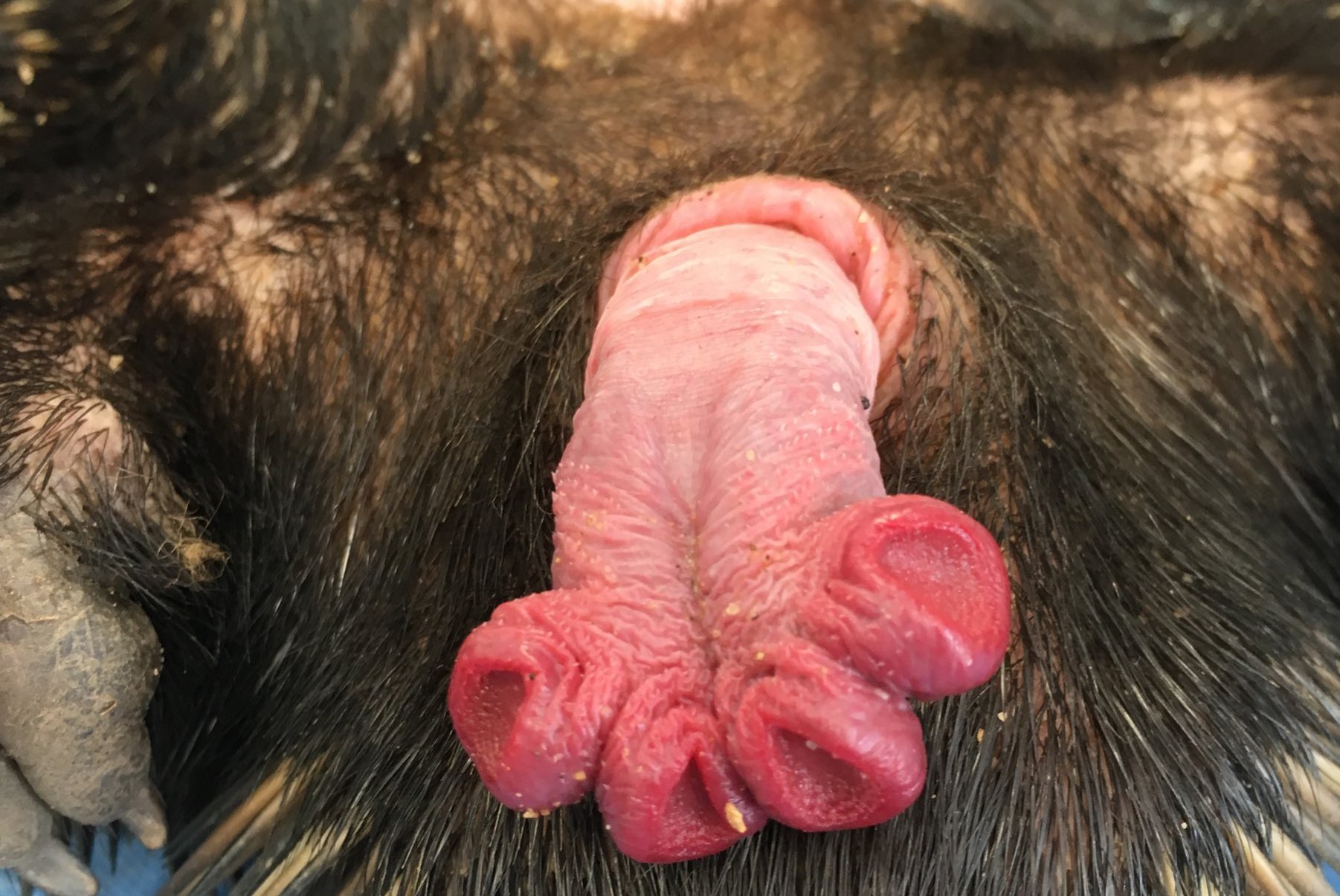 An echidna's penis. Image credit: Jane Fenelon
Reading Time: 3 Minutes • Print this page
“Have you ever seen an echidna’s penis?” You’ve probably asked your friends this in jest, but scientists are working away at unlocking the mystery of the bizarre reproductive system.

When people first hear about reproductive biologist Jane Fenelon’s research their first reaction is shock, but also, curiosity. “It’s amazing how many people have actually heard that there’s something weird about the echidna penis,” she says. “For those less informed, Jane then follows this up with an image of an echidna penis, and the feelings of shock roll back.

In late April, Jane and her colleagues published an in-depth research paper on the echidna penis. Labelled one of the “weirdest penises of the animal kingdom” by Smithsonian Magazine, the echidna penis is bright red and has four heads. ​”We’re not really sure why it looks so weird but we do know that they only use their penis for mating, not urine,” Janes says. “Because they don’t need it for urine, they had the freedom to make it much more elaborate and this is something you see in other species that only use it for mating.”

And while you may think we know all there is to know about the echidna, you’d be wrong.

The difficulty in studying the echidna is well-documented. Peggy Rismller, who has been studying echidnas for more than 30 years, was the first to discover that echidnas were laying their eggs into a pseudo-pouch, rather than hatching their eggs in burrows like their fellow monotreme, the platypus. That discovery was only made in the early 1980s, and the reproductive lives of echidnas continues to be difficult to capture.

Echidnas are a protected species, meaning scientists such as Jane can’t go around picking them up and prying at their reproductive systems. So, for this study Jane teamed up with Currumbin Wildlife Sanctuary on the Gold Coast, which operates a wildlife hospital. From it, Jane received echidnas, euthanised due to illness, to analyse.

What do we know about the echidna penis?

Prior to this study, co-author of the paper, Steve Johnston, had previously published a scientific paper documenting how echidnas were only using two of the four heads at any one time when erect. According to Jane, this is very unusual in mammals but is seen in some reptiles. Therefore, this most recent paper wanted to understand how echidnas were doing this.

The team of researchers believed that the echidna was using a valve mechanism to control which head it used. However, the paper revealed the two ‘corpora spongiosa’ (one of the main tissues that make up mammalian penises) remains entirely separate from the penis.

“Together with the split of the major blood vessel and urethra it gives the impression that the end of the echidna penis is acting like two separate glans penises, which explains how they ejaculate out of one side at a time,” Jane says.

So, what’s the point of knowing these things about an echidna’s junk? ​Well, echidnas are notoriously difficult to breed, and while Australia seemingly has echidnas in abundance, Jane says the main goal is to help with the conservation and breeding of the endangered long-beaked echidnas of Papua New Guinea.

“While understanding how the penis functions isn’t directly related to their conservation, understanding as much as possible about their reproduction in general will help us with that goal,” she says.

The next step will be understanding how the unusual structure of an echidna’s penis developed.

“We’d also like to look into how similar it is to crocodiles and turtles, which the adult form looks most like. There’s some evidence that the penis in all amniotes [reptiles, birds and mammals] has the same evolutionary origin and the monotremes are a missing piece of that puzzle.”