Peggy working with echidnas back in the 80s.
Reading Time: 3 Minutes • Print this page
Patience is one of Peggy Rismiller’s finest qualities, which is what makes her Australia’s most successful echidna expert.

PEGGY Rismiller has studied the echidna for three decades. She began her research in the 1980s, and now tells Australian Geographic that “Nothing ever happens quickly when you work with echidnas,” has become somewhat of a mantra over the years.

Guided by the questions posed by scientist and founder of the British Natural History Museum,  Sir Richard Owen, who was the first European person to thoroughly examine the echidna back in 1832, Peggy has set out to investigate all there is to know about these iconic Aussie animals.

But it’s certainly taken Peggy, as well as those who studied the echidna before her, a lot of time to create a full picture of this much-loved animal.

The first echidna specimens arrived in the UK in 1792 and were received by George Shaw of the Royal Zoological Society, who completed the first scientific descriptions.

“Shaw puzzled over the Australian mammal that had no teeth, a long tongue and was found on an anthill.  He thought it might be related to the South American ant-bear or was perhaps a new genus of porcupine,” Peggy says.

However, it was Sir Richard Owen’s re-examination of the specimens in the 1830s, those originally sent to Shaw, that established a lot of what we know about the echidna.

Owen determined, however, that all the questions remaining about the echidna following his in-depth research— their mating habits, gestation and the age of sexual maturity—could only be answered by observing the animal in its natural habitat.

The first time Peggy ever saw a wild echidna was in the Frankfurt Zoo. It wasn’t until she came to Australia with a grant to study the animal on Kangaroo Island in South Australia that she would see one in the wild.

Peggy began intensive fieldwork on the echidna in the winter of 1988 when she was given the task to find an egg in a pouch by Dr Roger Seymour, an egg physiologist and biochemical zoologist.

“Roger was a bit disappointed with all of our hard work, but I decided to stay behind with my partner Mike. We were taking our transmitters off the echidnas when I recognised one echidna that had been coming and going over time.

“I thought, ‘let’s just check her for the heck of it’ and I put my finger in her pouch. We unrolled her and there was an egg that had just hatched.”

All the research from her very first attempt at monitoring the echidna culminated into the 1991 scientific paper entitled The Echidna, which included the first written descriptions of how echidnas mate in the wild.

“It took 92 years after the echidna was first described that they realised it was an egg-laying mammal. Again, nothing ever happens quickly when you work with echidnas, so I was prepared to wait,” Peggy says.

Right now, Peggy is focused on finding out whether there may be an alpha female among echidna populations.

“A female generally only produces one young every 3 to 5 years so of course recruitment is very, very slow. Some females are reproducing more often than others. Perhaps, they’re sending out a smell or a sound signal that says ‘stay away’.”

Beyond the initial questions about reproduction and mating posed by Owen over a century ago, better understanding the echidnas quirky behaviours is something Peggy aims to do over the coming years.

“I would like to look into communication. Echidnas don’t vocalise or at least they don’t vocalise within our audible range and there is some slight evidence that they might be vocalising or communicating in a low frequency range.” 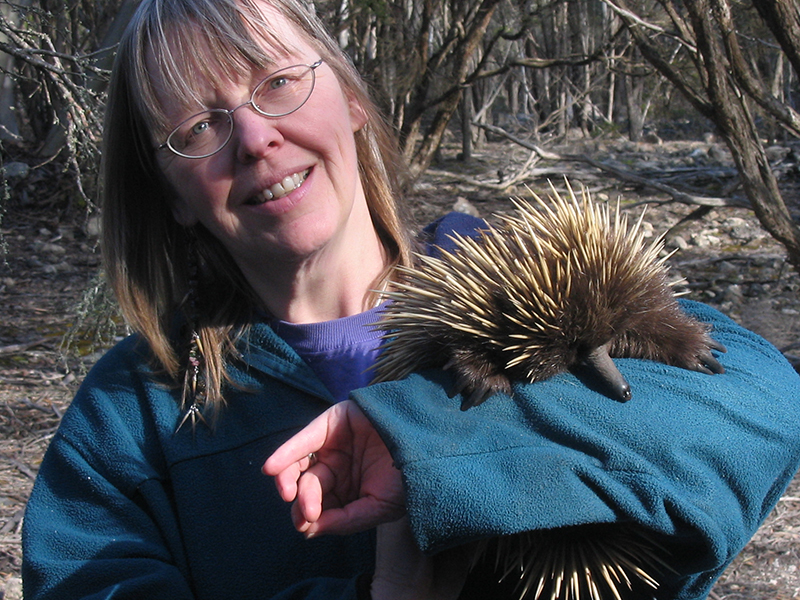