The bright and colourful world of Christmas tree worms

While these spectacularly coloured marine creatures are renowned for their good looks, few people are aware of the important ways they protect our coral reefs.
By Australian Geographic • October 17, 2017 • Reading Time: 2 Minutes • Print this page 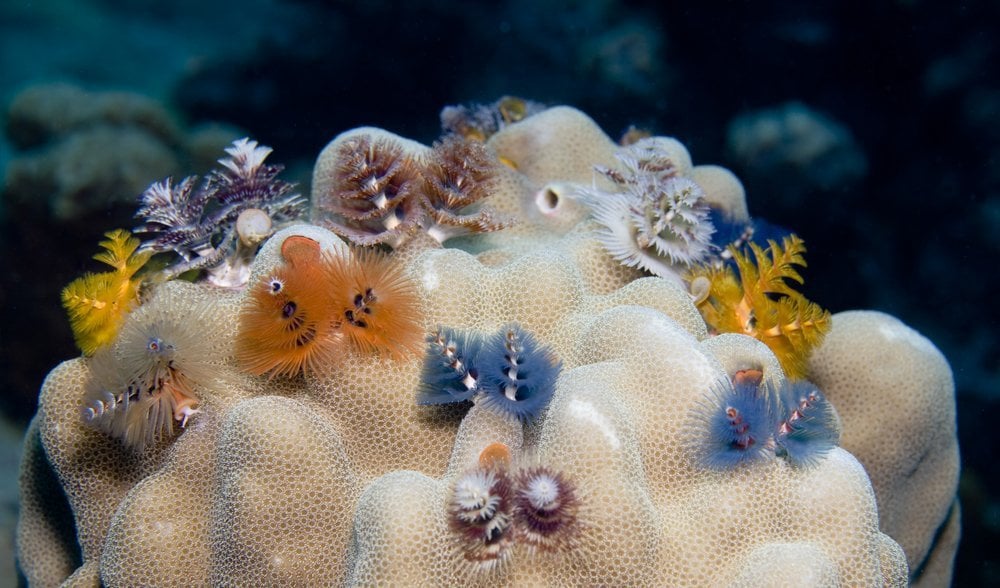 CONTRARY TO their name, colourful Christmas tree worms (Spirobranchus) decorate communities of coral reefs all year round. And their value goes far beyond their good looks.

According to Elena Kupriyanova, a senior research scientist at the Australian Museum who’s studied marine worms for over 20 years, these colourful creatures are first and foremost, protectors.

Much like the complex tree-root systems of a large forest, colonies of Christmas tree worms create a calcium carbonate tube that penetrates the corals they inhabit where they can live for up to 40 years, depending on the size of the coral and reef health.

“There were observations of fast recovery of living coral tissue adjacent to Christmas tree worm burrows following coral bleaching, predation, and overgrowth by turf algae. In these cases, recovery was facilitated by the presence of the worm.” Not only do these worms take their role as protector seriously, but they’re also quite modest about their appearance.

“One needs a lot of patience and good buoyancy skills to photograph them under water. They are very shy models and withdraw very quickly and come out again very reluctantly,” Elena says, adding that it makes it difficult for her to obtain specimens for her research.

“Obtaining Christmas tree worms from the coral is not an easy task as it involves using a chisel and hammer.”

According to Elena, the Christmas worm’s beguiling appearance has created quite the academic paradox.

“The major misconception is that they are well-known and well-studied, but nothing is farther away from the reality, there is this paradox – they are not studied well because of the assumption that such large and obvious animals should surely be already thoroughly studied,” Elena says, which has led to a crisis in taxonomy.

“For decades the iconic Christmas tree worms had been indiscriminately treated as a single tropical species Spirobranchus giganteus, the name one still sees in colourful guides on marine organisms. Now we know this is not the case and this particular species is found only in the Caribbean, and many other species inhabit tropical coral reefs.”

In 2019, a group of divers recorded a rare sighting of Christmas tree worms spawning on at Agincourt Reef, off Port Douglas on the Great Barrier Reef.

Shane Down, who managed to capture footage of the event said it was the first time he’d ever seen Christmas tree worms spawning, despite amny years spent on the reef.

“I have seen coral spawning many times but to see this in the middle of the day on a dive was truly magical, very rare and special,” says Shane.

“It’s an amazing world under the water and the corals never cease to astonish a long-time underwater advocate.”

See the footage below.