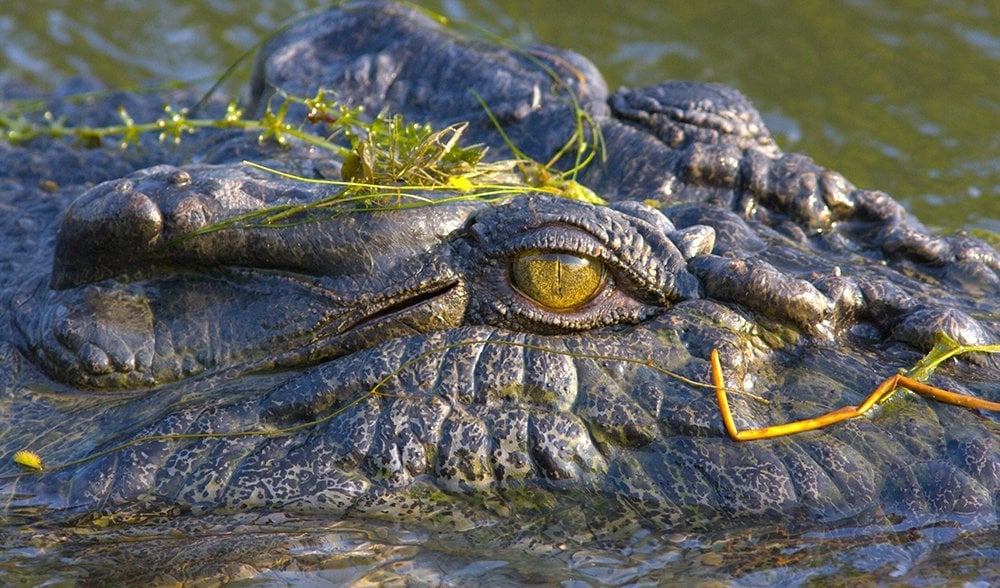 Image credit: Parks and Wildlife Commission of the NT
Reading Time: 6 Minutes • Print this page
The swamps, rivers and estuaries across northern Australia are home to one of the biggest, fiercest – and perhaps most misunderstood – predators in the world. We wrestle the saltwater crocodile facts from the fiction, including how to stay safe in croc country.

THE SALTWATER (OR ESTUARINE) crocodile (Crocodylus porosus) is the world’s largest living reptile species, growing up to 6m long and weighing up to a tonne. Saltwater crocs, or ‘salties’, are also perfectly evolved predators.

When hunting prey, they lie in wait, partially submerged or completely underwater – able to hold their breath for up to an hour by reducing their heart rate to just 2-3 beats per minute. Whilst submerged, special transparent eyelids enable them to see underwater – and, thanks to the forward-orientation of their eyes, salties are experts at judging the distance of unsuspecting prey.

When a saltwater crocodile attacks, its incredibly strong tail enables sudden speedy lunges out of its watery hiding places, while strong back legs mean they can move with lightning speed from a stationary position – leaving any unfortunate nearby prey little time to react. Its powerful jaw is filled with 64-68 teeth, ready to bite down with the greatest bite pressure measured in any living animal.

In short, millions of years of evolution has resulted in a ferocious, expert hunter for which it’s impossible not to feel equal parts respect and fear… which makes it all the more ironic that, in just a few short decades in Australia, we almost managed to wipe our saltwater crocodiles out completely.

“Shoot the lot of them”

When the unsustainable hunting practices of the mid-20th century finally ceased in 1970, there were fewer than 3000 individual saltwater crocodiles left in Australia’s croc capital, the Northern Territory.

“’Shoot the lot of them’, some people suggested to me when I first arrived in Darwin,” says Adam Britton, a zoologist and expert in crocodile biology, behaviour and conservation at Charles Darwin University.

Originally from the UK, Adam brought his childhood fascination with crocodiles and a PhD in zoology to Australia 20 years ago to focus on crocodile research and management in the Top End. “I’ve always been attracted to studying species that are misunderstood, vilified and generally disliked,” he says, adding, “I’m fascinated by what creates such strong feelings in people; and trying to understand that is the first step in trying to address those feelings.”

Adult saltwater crocodile lifts its head to smell the air. “They essentially use their throats to pump air in and out of the nostrils to have a quick sniff; it’s called a ‘gular pump’,” explains Adam. (Source: Adam Britton / Big Gecko)

Protected since 1970, saltwater crocodiles have come back with a vengeance – the total Australian population is currently estimated to be around 100,000 in the NT alone and probably more than 150,000 Australia-wide. And with that rise in numbers has come increased fear. While attacks are still relatively rare, at about 1-2 fatalities per year on average (“There are certainly easier ways to get yourself killed,” says Adam), 2014 saw four people killed in the Northern Territory – the highest number since records began, and almost a fifth of all 21 fatalities since 1974.

Rather than indicating an upward trend, 2014 was an anomolous ‘spike’, says Adam (there were zero fatalities in 2015). However, the attacks nonetheless led to calls for renewed culling. A key argument against this approach, argues Adam – who, with his wife, biologist Erin, created an online database of saltwater crocodile attacks, called CrocBITE – is the fact the Territory has fewer attacks than nearby countries in south-east Asia, despite having healthier crocodile populations: a fact he puts down to better management practices.

“I’m not out to turn crocodiles into warm, cuddly critters, but I do want people to at least respect what they’re capable of,” says Adam.

Adult male saltwater crocodile underwater, where it can remain completely motionless for at least an hour. The back feet will rest on sand or branches to help propel the body forwards if a feeding opportunity comes into range. You can also see the translucent ‘third eyelid’ clearly here. (Source: Adam Britton / Big Gecko)

If anyone has a healthy respect for what saltwater crocodiles are capable of, it’s Tom Nichols, Senior Wildlife Ranger at the NT Parks and Wildlife Commission’s Crocodile Management Unit in Darwin. More than 10 years ago, Tom lost two fingers after an unfortunate interaction with a salty.

“It was a routine capture,” he recalls. “I was getting a croc out of a trap, when he did something different, which I’ve never experienced. He jumped with the snout rope attached and grabbed hold of my hand. Fortunately he let go, but he ripped off two fingers and part of my hand.”

With healthy population numbers, Tom has his work cut out for him. His Crocodile Management Unit responds to 24-hour call-outs for crocodile sightings, in particular problem crocodiles or “crocs getting too friendly”, and for reported attacks. During the wet season, Tom says the unit can have up to 40 mobile traps located at different places in the Top End responding to call-outs.

NT Government educational video with song encouraging people to ‘Be Crocwise’ in and around waterways.

Tom’s unit also has 26 permanent traps located in areas of recreational and commercial use in Darwin, which are checked and rebaited every week, with crocodiles captured live and taken to a local crocodile farm.

Other roles include enforcement, when people fail to abide no-go areas, and providing occupational health and safety risk assessments and assistance in situations when workers are required to dive in known crocodile habitats.

Just like the croc that gave him a nasty surprise a decade ago, Tom says attacks and crocodile behaviour are largely unpredictable. “I regard crocs like humans,” he says. “You know what they’re capable of, but you don’t know what they’re going to do.”

Tom’s main tip for staying safe sounds simple: only ever swim in designated, signed areas. But it’s simple common sense that can save lives – in October last year, when detailing the circumstances of two horrific 2014 attacks, the Northern Territory coroner said complacency was a key part of the problem and that getting the ‘croc-wise’ message across was more important than ever.

Young adult male warming itself in the evening light. Crocodiles mostly bask during dry season mornings/afternoons when it’s not too hot, and retreat into the water at night when it becomes cool. (Source: Adam Britton / Big Gecko)

Adam drives home the point: “The best approach is to assume any body of water in crocodile habitat contains a saltwater crocodile,” he says – and that includes freshwater. “There’s a misconception that ‘saltwater’ crocodiles aren’t found in freshwater areas, but this is quite wrong and could be a fatal mistake.”

Adam says complacency can stem from crocodiles’ unpredictability and strings of good luck. “People can get away with doing silly things around crocs for years, and that’s a real problem, because one day their luck is going to run out,” he says.

Again, Adam’s main advice for staying safe is mostly common sense: “Minimise your contact with the water, stay a sensible distance from the edge, be careful if you have young children and watch your dogs – crocs love dogs that play near the water’s edge.”

What a croc: myths and misconceptions

Ever heard the one about how crocodiles ‘stash’ their prey for several days to rot before feeding? It’s probably not true, says Adam. “Nobody has ever reliably seen crocodiles do this” – and besides, he adds, crocodiles “can happily rip fresh prey apart using a violent flick of the head, or rolling the body”.

In fact, myths – such as the one about salties not liking freshwater – abound when it comes to crocodile biology and behaviour, perhaps unsurprisingly so, given the awe such a large, fearsome predator inevitably invokes.

“Some [myths] have been repeated so often that nobody asks why anymore,” Adam says.

Another popular legend is of the famous ‘crocodile bird’ which supposedly rips leeches from the tongue of Nile crocodiles. “Nobody has ever photographed or filmed this, but the myth persists to this day,” says Adam, who explains that this myth actually originated with the ancient Greek philosopher Herodotus. “He also claimed that crocodiles don’t possess an anus, and that they have to regurgitate their food – and believe it or not I’ve heard a few people ask whether this is true even today.”

For the record, it’s not.

Source: Parks and Wildlife Commission of the NT

Some myths are more harmful than others. For example, there’s a common misconception that crocodiles won’t bite if their head is submerged, because their mouths would fill with water. “This is very much false; crocs have a valve at the back of the throat allowing them to open their jaw wide and take a good old bite of your leg if you’re foolish enough to believe this one,” says Adam. Noted.

At the end of the day, this finely honed predator has been around a lot longer than us – and our connection to crocs runs a lot deeper than fear alone, from cultural connections, to their contribution to local livelihoods and attracting tourists, and their vital role in the ecosystem.

Not to mention their value to enthusiasts like Adam. “I’m just fascinated by creatures that have clearly hit the evolutionary jackpot by coming up with a near-perfect predator design,” he says.

“Everything about their biology, physiology and behaviour is finely honed to maximise their chances of survival, and I want to know how they do it. Crocodiles are still a bit of a mystery, and zoologists love a good mystery.”