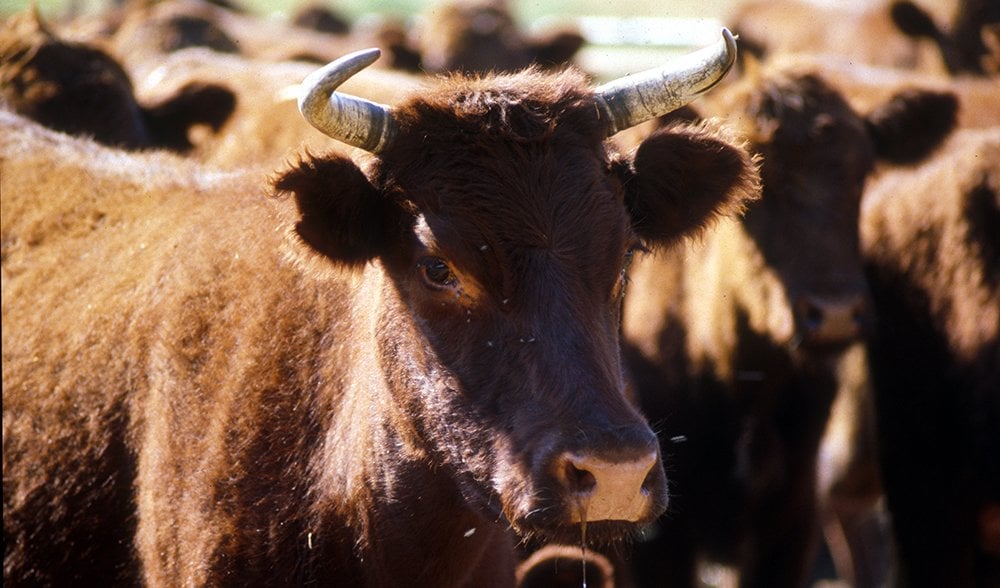 Nervous? Maybe you should be – cows (including bulls and bovine) killed 33 Australians between 2000 and 2010, more than sharks and snakes combined. Image credit: CSIRO
Reading Time: 3 Minutes • Print this page
Australia is renowned for its venomous snakes, scary spiders and even painful plants – but the animals that pose the biggest risk to our lives might surprise you.

BETWEEN 2000 AND 2010, there were 254 reported and confirmed animal-related deaths in Australia, according to the latest report from an online database of coronial cases.

That’s probably not surprising, considering our country’s reputation – home to some of the world’s most deadly snakes, pretty scary spiders, plus some surprisingly venomous critters such as the cone snail, box jellyfish and blue-ringed octopus.

And let’s not forgot our most ferocious predators, sharks and saltwater crocodiles.

We even have a plant that, while not fatal, has a sting so excruciating it may have once been investigated for use in biological warfare.

These are the horror stories that spread across the globe and give our continent its fearsome reputation – however, the animals that really risk our lives are far more commonplace. Falling off a horse is the most probable animal-related death in Australia. (Image: Cgoodwin/Wikimedia)

Horses and cows and dogs, oh my!

Back in 2011, Australia’s National Coronial Information System (NCIS) released its most recent report into the trends and patterns surrounding animal-related deaths in Australia, covering the first decade of this century.

Of the 254 confirmed and reported animal-related deaths during that 10-year period, horses, cows and dogs were the most frequent culprits, accounting for 137 deaths.

Horses (including ponies and donkeys) were the most ‘deadly’ animal in Australia, causing 77 deaths in 10 years, mostly related to falls. Cows (including bulls and cattle/bovine) accounted for 33 deaths – 16 by causing motor vehicle accidents, the rest by crushing, piercing or ‘unknown’. The majority of the 27 deaths caused by the third biggest killer, dogs, were from attacks, with those deaths mostly occurring in children under four years old and in elderly people. Kangaroos and roads can be a deadly combination for both humans and the roos, but is our focus on this issue proportionate? (Image: Getty)

Next up was our beloved kangaroo, which (indirectly) caused the deaths of 18 Australians from 2000-10 (mostly related to car accidents), followed by bees which killed as many people as sharks (16 each). Only at seventh and eighth place on the list do we encounter the notorious snakes (14 fatalities) and crocodiles (9 fatalities), followed by emus which caused 5 deaths, all indirectly from motor vehicle accidents.

Almost three-quarters of victims were male and most of the deaths occurred either on public roads, in the home and on farms. Terrifying! Right? In fact, there hasn’t been a single death from a redback spider since the introduction of anti-venom. (Image: Laurence Grayson/Wikimedia)

In case you hadn’t cottoned on yet, it turns out most of our perception of risk is somewhat out of whack when it comes to judging the likelihood of a deadly encounter with certain animals (what’s scarier, surfing near a river mouth at dawn, or visiting a friend’s dairy farm?).

“Our perceptions of the probability of an event has been shown to depend on its availability – how easily we are able to bring such events to mind,” explains Professor John Dunn, from the University of Adelaide’s School of Psychology.

“Events appear on the news and/or are talked about because they are noteworthy, unusual, or dramatic. As a result, these kinds of events are more available and hence we overestimate their probability of occurrence,” he says.

John points to a 1978 study, in which participants were asked to predict the likelihood of dying from certain of causes. The authors were able to show that the subjects’ over- and underestimates of certain risks could be predicted based on how often those causes of death appeared in local news stories.

“If availability was related to the actual frequency of occurrence of the event then we would be well-calibrated – that is, our judgments of the probability of an event would coincide with their actual probability,” says John.