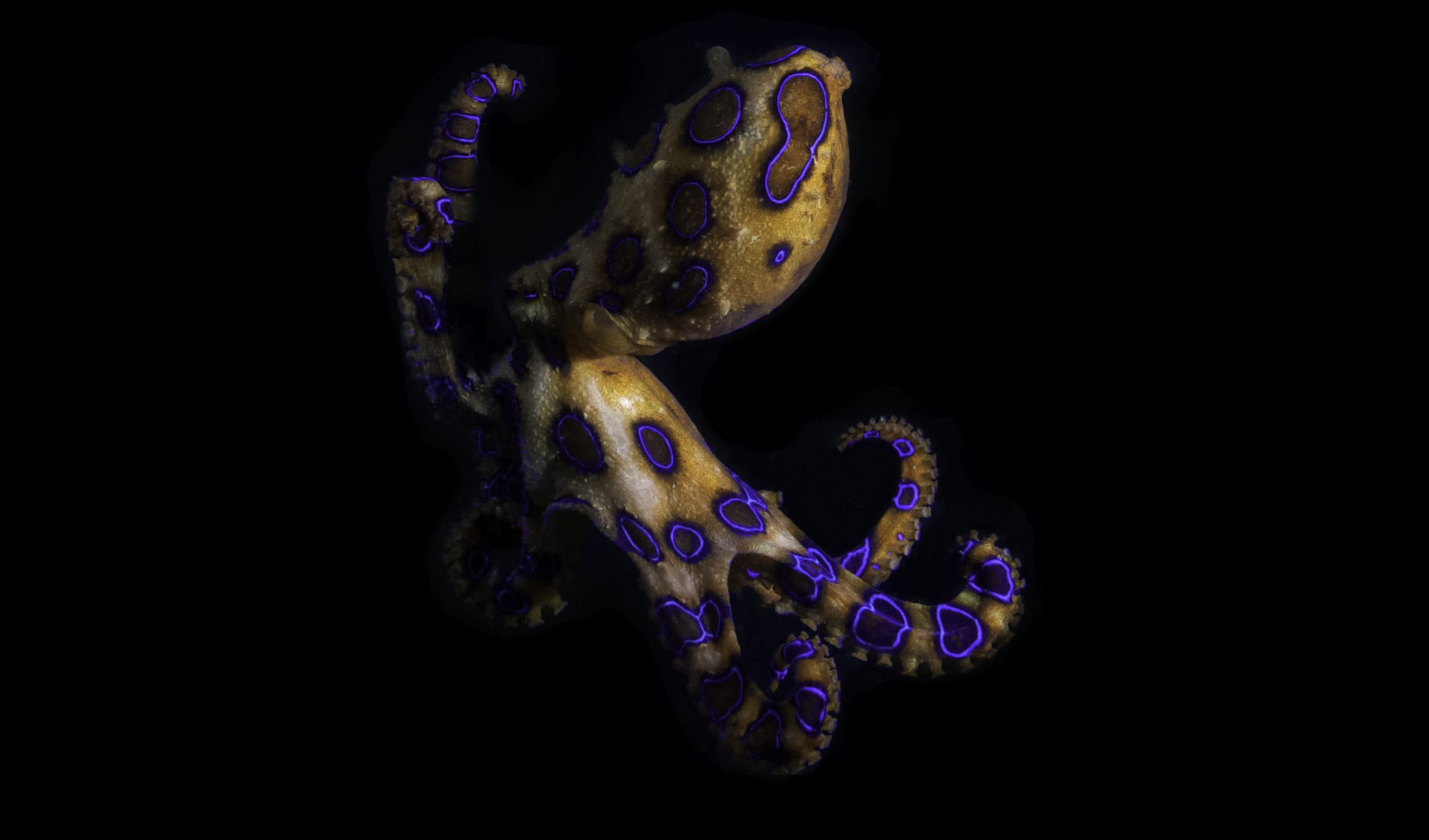 Although no bigger than an open hand, a blue-ringed octopus has an LD50 rating of 0.3 for some elements of its venom. Image credit: Yusran Abdul Rahman
Reading Time: 5 Minutes • Print this page
Australia’s global reputation as a haven for venomous creatures is well deserved. But would you know which should be most feared? Here’s our list of 10 of the most deadly.

THE DIFFERENCE BETWEEN ‘deadly’ and ‘dangerous’ and what makes one animal more fearsome than another comes down to a combination of factors. Behaviour is important. Shy creatures aren’t as risky as those that are highly aggressive or inquisitive. Where they are found is also important. A venomous animal living in your backyard is more dangerous than one you’d only encounter in the desert.

Here we list animals based on venom potency. The usual way to measure and compare that is by using the LD50 scale. Historically the LD50 is the ‘lethal dose’ of venom – expressed in mg/kg – that would kill 50 per cent of the animals in a sample group (e.g. laboratory mice). The lower the LD50 score, the more toxic the venom.

Venom comes in many forms. Some types of venom can attack the brain and nervous system (neurotoxic), while others attack your cell’s molecular structure (proteolytic), the cardiovascular system (coagulopathic), or muscle tissue (myotoxic); they can also break down tissue (cytotoxic).

Venom can have any number, or even all, of these compounds. Highly neurotoxic venom is thought to be the most deadly to humans. Other side effects of venom include disruption to blood coagulation by hastening or slowing its flow, causing either haemorrhaging or clotting.

How lethal the venom is to humans also depends on how the venom is delivered, which is, in turn, influenced by fang size and how much venom is injected (venom yield). Some venom is more dangerous for other animals than for humans, and vice versa.

These are Australia’s most venomous animals, ranked by their LD50 rating:

An LD50 of 0.025 makes this the world’s most venomous snake. Its venom contains nerve-damaging neurotoxins, myotoxins that target muscle tissue and procoagulants that lead to excessive bleeding. An average bite yields 44mg of venom, which could kill 25–30 people. Symptoms range from headaches and nausea to paralysis, typically leading to death within 45 minutes. Fortunately, this snake lives in the arid interior, and so people rarely encounter it. No human deaths have been attributed to it and antivenom is available.

One sting from this predatory snail could kill many adults. One component of its venom, which needs to be deadly and fast-acting to swiftly kill its fish prey, has an LD50 of 0.012. It contains neurotoxins that in humans affect vision and speech. Australia’s only recorded death occurred in 1935. These snails are found near Indo-Pacific ocean reefs and are most likely encountered when they are stepped on. Because stings can be painless, people may not realise they have been stung.

One of the most venomous marine creatures known, the box jellyfish can kill a healthy adult in minutes. This jellyfish is found in northern Australian waters and has caused more than 70 deaths here since 1883. It has an LD50 of 0.272. As well as haemo-
toxins and neurotoxins, the venom contains dermatonecrotic substances, which cause skin-scarring. Venom is delivered by millions of tiny, harpoon-like stinging cells on up to 60 tentacles, and an encounter is said to be excruciating.

The world’s second most venomous land snake, with an LD50 rating of 0.053, brown snakes (now considered to be nine closely related species) have caused more than 21 deaths since 2000 – more than one a year.

A bite delivers 2–6mg of venom and can cause cardiac arrest, but more often leads to uncontrolled bleeding, with symptoms seen within 15 minutes. Found in highly populated areas throughout eastern Australia, it’s commonly encountered.

The yellow-bellied sea snake is a true sea snake, spending its entire life in ocean waters throughout the tropical Indo-Pacific. With an LD50 of 0.067, a bite from this snake yields a small amount (1–4mg) of powerful venom that attacks nerve and muscle tissue. Bite symptoms range from muscle stiffness and drooping eyelids to paralysis and death. Fortunately, no known fatalities have been recorded in Australia, probably because this snake is rarely encountered by people.

Found along the coast from northern NSW to northern WA, coastal taipans are equipped with the longest fangs (up to 12mm) of any Australian snake, and have the third most toxic venom of any land snake in the world. With an LD50 of 0.099 and enough venom (120–400mg) to kill up to 12,000 guinea pigs in a single bite, this taipan has been responsible for surprisingly few deaths. Its venom contains neurotoxins, haemotoxins and myotoxins and can kill an adult in 30 minutes. Since antivenom was developed in 1956 there have been no known deaths.

One of the world’s most venomous land snakes, this species has been responsible for three known deaths in Australia since 2000.

It has an LD50 of 0.118 and average venom yield of 30–70mg. This venom – which acts
on nerves, muscles and blood – can trigger a severe reaction within 15 minutes, although antivenom is available. Common symptoms are paralysis, muscle damage and uncontrollable bleeding. The tiger snake is thought to be one wide-ranging species that has great variation in size and colour across southern Australia, including Tasmania.

Australia’s, and possibly the world’s, deadliest spider, it can kill an adult in an hour. With its venom high in neurotoxins, it has an estimated, but unverified, LD50 rating of 0.16. It has been responsible for 13 known deaths in Australia, although none have been recorded since antivenom was developed in 1981. A bite yields an average dose of 0.14mg of venom, is extremely painful and can cause muscle spasms and convulsions. Renowned for being aggressive and with fangs that can pierce toenails, it is found in bush and urban areas in the Sydney basin.

All 31 Australian sea snakes are venomous, but most are docile – with the exception of the beaked sea snake. With an LD50 of 0.164, its venom contains a highly toxic dose of nerve and muscle toxins. A single bite can result in paralysis and muscle damage within six hours and delivers enough venom (7.9–9mg) to kill a number of human adults. Previously thought to be one species, it is now considered to be two: one from Asia and one from Australia. Fortunately, the antivenom for the Asian snake works on both.

Although no bigger than an open hand, a blue-ringed octopus has an LD50 rating of 0.3 for some elements of its venom. One bite contains enough neurotoxins to paralyse many people. They are responsible for at least two known deaths in Australia prior to the 1960s. A bite can induce muscle weakness, breathing difficulties and paralysis within 10 minutes. Death can occur rapidly unless CPR is performed swiftly. There’s no antidote and bites sometimes go unnoticed. It’s found in tide pools and coral reefs in Indo-Pacific waters.