Australia is known for its dangerous snakes, and we have many – but in reality few people die from bites.
By Tiffany Hoy • July 25, 2012 • Reading Time: 6 Minutes 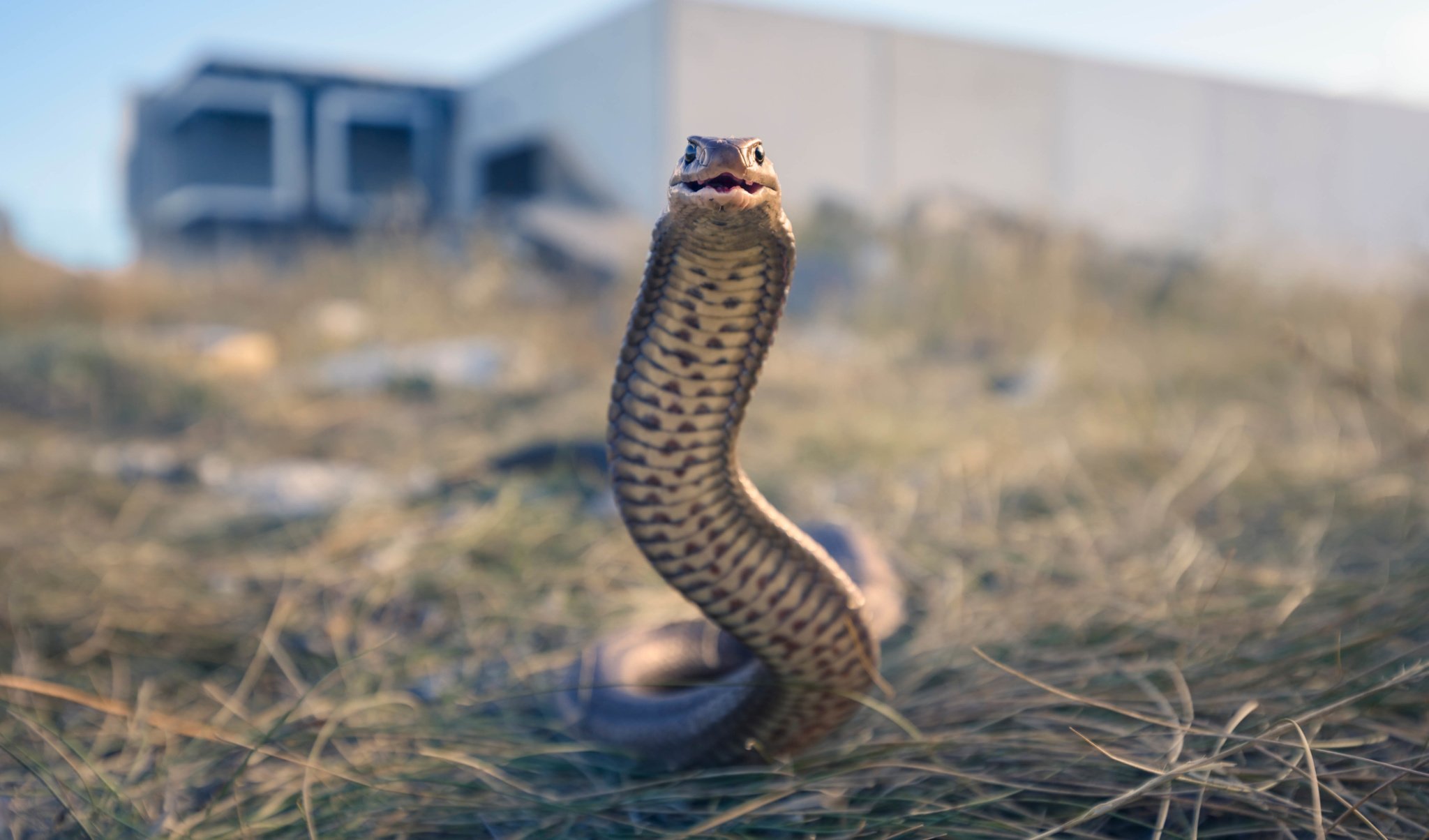 WHEN IT COMES TO self-defence, Australia’s snakes have things pretty well covered. We share our continent with about 170 species of land snakes, some equipped with venom more toxic than any other snakes in the world.

But bites are actually quite rare in Australia and, since the development of anti-venom, fatalities have been low – between four to six deaths a year.

“This is in contrast to India, for example, where bites may reach one million a year, with over 50,000 deaths,” says Associate Professor Bryan Fry, a herpetologist and venom expert at the University of Queensland. “Snake bites are very, very rare [in Australia] and often the fault of the person being bitten. Most bites occur when people are trying to kill a snake or show off.”

Most snakes would rather slither away from humans than fight them. “Snakes don’t perceive humans as food and they don’t aggressively bite things out of malice. Their venom is used to subdue prey that would otherwise be impossible for a snake to eat,” says Dion Wedd, curator of the Territory Wildlife Park, NT. “If their only escape route is past a human with a shovel, then they are likely to react in the only way they can.”

So if you’re standing between a snake and its escape route, prepare for a fearsome display. Although all species are potentially dangerous, here’s our pick of the 10 most dangerous snakes in Australia – some of them highly venomous, some extremely nervous, some you’re just more likely to see slithering away in your backyard.

From the gwardar and the python to sea snakes and the red-bellied black snake, slither through the stories of Australia’s most dangerous snakes. Packed full of detailed illustrations, beautiful images from the Australian Geographic image library, interesting fact files and information about what snakes eat, where they live, how they see and hear, what their eggs look like and much more!

Also known as: common brown snake
Found: throughout the eastern half of mainland Australia

Fast-moving, aggressive and known for their bad temper, eastern brown snakes, together with other browns are responsible for more deaths every year in Australia than any other group of snakes. Not only is their venom ranked as the second most toxic of any land snake in the world (based on tests on mice), they thrive in populated areas, particularly on farms in rural areas with mice.

If disturbed, the eastern brown raises its body off the ground, winding into an ‘S’ shape, mouth gaping open and ready to strike. Its venom causes progressive paralysis and stops the blood from clotting, which may take many doses of antivenom to reverse. Victims may collapse within a few minutes.

Also known as:gwardar
Found: widespread over most of mainland Australia – absent only from the wetter fringes of eastern Australia and south-western Western Australia

Said to be less aggressive than its eastern cousin, the western brown snake is still highly dangerous and part of the group of snakes that causes the most fatalities in Australia.Western browns tend to be fast moving and nervous in temperament. When disturbed, they will run for cover, striking quickly if cornered, then making a quick getaway.

Though their venom is not as toxic as the eastern brown’s, they deliver three times as much. Bites are usually painless and difficult to see due to the small fang marks. Victims will experience headache, nausea, abdominal pain, severe coagulopathy (blood clotting disorder) and sometimes kidney damage.

Also known as: common tiger snake
Found: along the south-eastern coast of Australia, from New South Wales and Victoria to Tasmania and the far corner of South Australia

Mainland tiger snakes are responsible for the second-highest number of bites in Australia, as they inhabit highly populated areas along the east coast, including some metropolitan areas of Melbourne. They are attracted to farms and outer suburban houses, where they hunt mice nocturnally and can easily be trodden on by unsuspecting victims in the darkness.

Bites are fatal if untreated, causing pain in the feet and neck, tingling, numbness and sweating, followed by breathing difficulties and paralysis. The venom also damages the blood and muscles, leading to renal failure.

Adult snakes are usually (but not always) banded, with ragged stripes varying in colour from pale yellow to black along a solid, muscular body that can grow to 2m. When threatened, they flatten their necks and strike low to the ground.

Reclusive and rare, the inland taipan hides out in its remote, rocky habitat. This snake only makes the top 10 because of its highly toxic venom, considered to be the most potent of any land snake in the world; it has the potential to kill an adult human within 45 minutes.

Hunting in the confined space of the burrows of the long-haired rat, the inland taipan uses its potent venom to finish off prey quickly, injecting more than 40,000 times the amount needed to kill a 200g rat. The prey has little chance of fighting back.

Only a handful of people (all snake handlers) have been bitten by this species. Each survived with first aid and hospitalisation.

Also known as: eastern taipan
Found: in an arc along the east coast from northern New South Wales to Brisbane and northern Western Australia. They are fond of sugarcane fields.

Coastal taipans are equipped with the longest fangs of any Australian snake (13mm), and have the third most toxic venom of any land snakes.

Extremely nervous and alert, they put up a ferocious defence when surprised or cornered, ‘freezing’ before hurling their lightweight body forward to inflict several lightning-fast snapping bites. However, they’re not usually confrontational and would much rather escape any threat.

Before the introduction of a specialised antivenom in 1956, taipan bites were nearly always fatal and caused many human deaths. The venom affects the nervous system and the blood, with nausea, convulsions, internal bleeding, destruction of the muscles and kidney damage. In severe cases, death can occur in just 30 minutes.

Also known as: king brown snake
Found: throughout Australia, except in Victoria, Tasmania and the most southern parts of Western Australia – the widest distribution of any Australian snake

The mulga is the heaviest venomous snake in Australia and has the largest-recorded venom output of any in the world – delivering 150mg in one bite; the average tiger snake only produces 10-40mg when milked.

Their temperament seems to vary with locality. Southern mulgas are reported to be shy and quiet, whereas northern specimens are much more agitated if disturbed – when they throw their heads from side to side and hiss loudly. Mulgas bite savagely, even hanging on and chewing as they inject massive amounts of highly toxic venom, which destroys blood cells and affects the muscles and nerves. Though commonly known as a king brown snake, the mulga is actually a member of the black snake genus Pseudechis, and black snake antivenom is needed to treat a bite.

The lowlands copperhead is the only venomous snake found above the snow line, active in weather usually considered too cold for snakes. A water lover, copperheads snakes are at home around dams, soaks, canals, drainage ditches and along the verges of roads.

Copperheads are shy and prefer to avoid humans, though they live in populated and agricultural areas. If cornered, they will hiss loudly, flatten their body and flick or thrash about, usually without biting. With further provocation they may lash out, though they are slow to strike and can be inaccurate.

Copperhead venom is neurotoxic (damaging nerves), ruptures the blood cells and damages the cells and muscles – but rarely causes fatalities.

At about 50cm long, the small-eyed snake may be petite but its venom can pack a punch and shouldn’t be underestimated. Little is known of its toxicity, but bites have caused illnesses in snake handlers and there has been one known fatality. The venom contains a long-acting myotoxin that continues to attack muscle tissue (including the heart muscle) for days after the bite.

Though common, small-eyed snakes are secretive night-dwellers and therefore don’t often come into contact with humans. Coloured black or dark grey with a silvery belly, they blend into the night. When disturbed they may thrash about aggressively, but are not usually inclined to bite.

The common death adder is an ambush predator that sits motionless, concealed in leaf litter, sand or gravel, twitching the worm-like lure on the end of its tail to attract prey.

Unlike other snakes that flee from approaching humans crashing through the undergrowth, common death adders are more likely to sit tight and risk being stepped on, making them more dangerous to the unwary bushwalker. They are said to be reluctant to bite unless actually touched.

About half of death adder bites proved fatal before the introduction of antivenom. The venom contains a type of neurotoxin which causes loss of motor and sensory function, including respiration, resulting in paralysis and death.

Also known as: common black snake
Found: distributed down the east coast (though not to Tasmania) and slightly into south-eastern South Australia

The red-bellied black snake is somewhat less venomous than many other Australian snakes, but you’re more likely to come across it in urban areas and its bite is certainly no picnic, causing significant illness and requiring medical attention.

Red-bellied blacks are one of the few large venomous snakes still found in the Sydney region, and at 2m-long are capable of eating other snakes. They are not particularly aggressive and will escape from humans if possible, but when threatened will flatten their bodies and hiss loudly.

The venom causes blood-clotting disorder and muscle and nerve damage, enough to knock you off your feet, but rarely deadly. No deaths have been confirmed from bites by this species.

Learn everything you need to know about some of Australia’s most deadly creatures with the Australian Geographic Venomous Snakes poster – perfect for both classrooms and homes. Includes first-aid tips. This poster is 690mm x 495mm when open, delivered unfolded in mailing tube.