Creating the first map of the world’s ocean floor 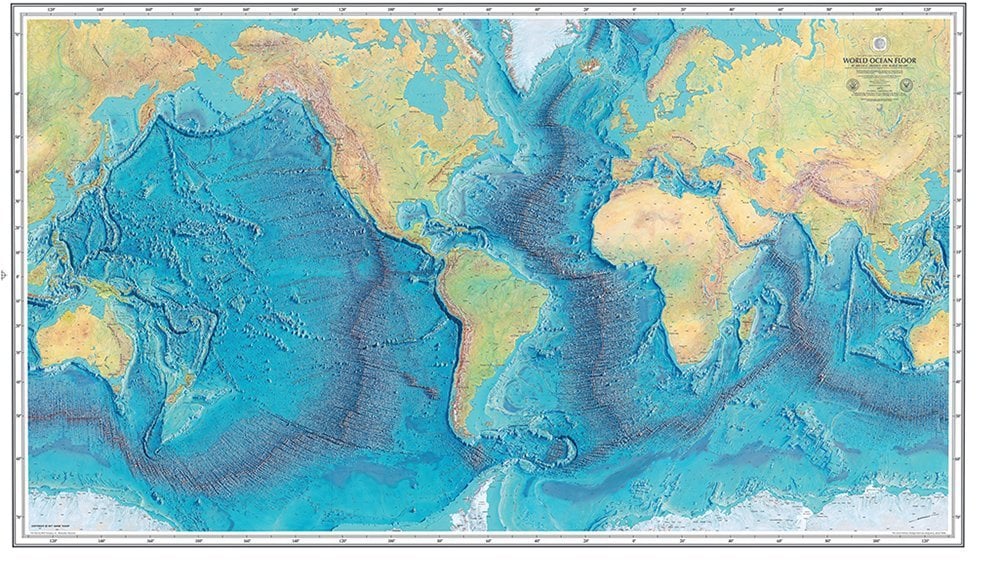 The first map of the world's oceans. Image credit: Courtesy Marie Tharp Maps
Reading Time: 2 Minutes • Print this page
The ability to imagine the contours of the ocean floor led cartographer Marie Tharp to forever change our understanding of the forces shaping the planet.

REVEALED TO THE world in 1977, this is the first map of the Earth’s ocean floor. Today we know more about the topography of the Moon and Mars than we do about our own planet’s sea floor.

But in the 1950s and ’60s, when this feat of cartography was being assembled by US cartographers Marie Tharp and Bruce Heezen, we knew almost nothing. Prior to their discoveries, the undersea terrain was thought to be largely flat, but Tharp’s work in particular revealed a 65,000km chain of mountains, or mid-ocean ridges, which encircled the planet.

In black-and-white photographs her lips are often pursed and she tends to be looking directly into the camera, eyebrows raised, expression forthright. She must have been determined, because amid the then male-dominated corridors of New York City’s Columbia University, one of the biggest geological discoveries in history was confirmed by the maps she made in collaboration with Heezen.

Tharp’s would have been a more private satisfaction compared with Heezen’s. She was never acknowledged as an author on his papers, but he credited her for coaxing him to champion the then almost heretical theory of continental drift, which led to our modern understanding of plate tectonics.

The pair struck up an unlikely and stormy partnership in the 1940s when Heezen asked Tharp – a geologist working as a technical assistant – to draw 3D-like maps using ocean floor depth ‘soundings’.

The ocean an unexplored surface

Today, conservative estimates suggest only 5 per cent of the ocean floor has been well documented but back then it was less than 1 per cent. Modern research vessels model the sea floor in large swathes on computers. But in the ’40s, sonar – which estimates depth by the time it takes a signal to bounce off the sea floor – was relatively new.

Before then, mapping had been restricted to shallow shipping lanes measured with weighted ropes. Working with this scant information, Tharp used her experience and intuition to fill in the spaces between the data points.

“Her role as a cartographer was to paint light into this dark, underwater seascape,” says Dr Robin Beaman, a marine geologist at James Cook -University in Townsville. “Her maps completely revolutionised the way we see the sea floor.”

By 1952 she had become so good at it, she was sure she could see evidence of an 11,000km-long crack through the underwater mountain range known as the Mid-Atlantic Ridge.

At the time, most geologists believed that mountains were wrinkles left as the Earth had cooled and solidified. Worryingly for Heezen, Tharp’s rift seemed to support the arguments of ‘drifters’, then considered an outlandish bunch who proposed that land masses were moving across the planet’s surface. Despite his misgivings, Heezen, together with Tharp, soon found links with seismic data from -earthquakes that appeared to -emanate from the cleft. A few years later prominent geologists acknowledged the -game-changing implications of their work.

“The arguments for the new plate tectonic theory were overwhelming,” Robin says. “Everything we do on the ocean floor now is really just improvements on her maps.”
After collaborating with alpine landscape painter Heinrich Berann, the pair eventually produced the 1977 World Ocean Floor Map, still considered one of the most beautiful pieces of cartography ever created.