A series of maps trace the unveiling of Australia, from the fantasies of second-century Egypt to Flinders’ last work.
By Alasdair McGregor • August 15, 2014 • Reading Time: 3 Minutes • Print this page 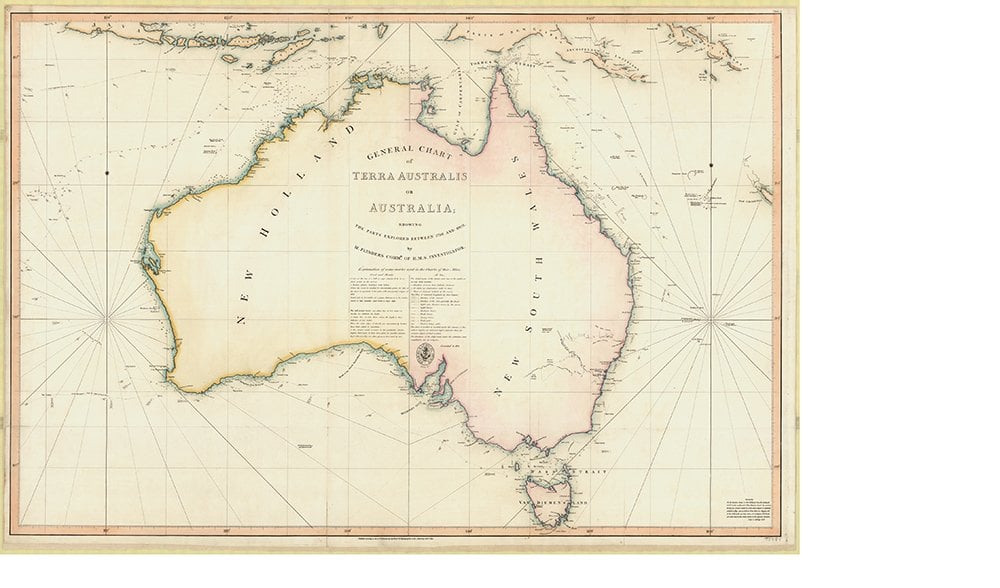 FROM ANCIENT imaginings of the medieval world – where Jerusalem lay at the centre of creation – to sumptuous wall charts proclaiming the might of European empires, a series of maps on display at the National Library of Australia (NLA) takes us through centuries of geographical speculation about the Southern Hemisphere.

With more than 130 maps, globes, manuscripts, paintings and objects – many of them on loan from the great libraries of Europe – the Mapping Our World: Terra Incognita to Australia exhibit tracks the unveiling of the Great South Land as it moved from abstract conjecture to familiar outline.

But, if you thought all medieval Europeans believed the Earth was flat, think again. The idea of a flat Earth is actually a misconception of recent popular culture, and the early documents show how sophisticated the era’s geographical knowledge was.

Based on the rediscovered work of the influential second-century Alexandrian astronomer and geographer Claudius Ptolemy, the Ulm Ptolemy World Map of 1482 pieces together more than 8000 coordinates first noted up to a millennium earlier.

“Such a wonderful thing that this information could find its way into print. It was all based on the idea from the ancient world that you can calculate your position from the stars,” says Martin Woods, curator of maps at the NLA. And there along the bottom of Ptolemy’s map is the earliest hint of a southern land.

From the mid-15th century, the hand-painted Fra Mauro Map of the World displays a vast amount of knowledge of coastal navigation, accumulated since Roman times.

As the colonial and trading reach of Europe extended into the previously unknown Southern Hemisphere, geographical knowledge of it became a commercially valuable commodity. So sensitive was this information that the Dutch East India Company had a secret atlas documenting its discoveries in the Indian Ocean and South-East Asia.

However, other large-scale and ornately decorated maps, such as Archipelagus Orientalis, sive Asiaticus (1659–63) by master cartographer Joan Blaeu, were intended for public display. The Blaeu map – recently acquired by the NLA – was the first large-scale map of New Holland published, and was “made very much as an illustration of wealth and political power”, Martin says.

Most recently, Matthew Flinders’ General Chart of Terra Australis brings us to the shores with which we are all familiar. Near the end of an all-too-brief life full of accomplishment, Flinders was imprisoned by the French from 1804 to 1810 on the island of Mauritius, where he laboured on his chart.

As Martin explains, it was a “frustrating finale” to the remarkable career of the first explorer to circumnavigate Australia. “Flinders desperately hoped to return and finish the job,” Martin says. “Having spent months and months on small sections of the east coast, he wanted to bring the same accuracy to the west and north. In the end, though, he was forced to rely on the charts of the Dutch explorers, [Abel] Tasman and [Willem] de Vlamingh, to complete his work.”

Famously, Flinders used the name ‘Australia’, supplanting the Dutch name of New Holland. “It was as much a geopolitical statement as a geographical one,” Martin says. The Portuguese, Dutch, Spanish and French had been eclipsed in discoveries about and, ultimately, claims on the Great South Land, which Flinders’ chart made manifest.

Intriguingly, Flinders was not the first to use ‘Australia’ in print. On a page from Astronomica: Teutsch Astronomei – an astronomical treatise published in Frankfurt in 1545 by Cyriaco Jacob zum Barth – there is a map no bigger than a 50-cent piece. Clearly discernable on this tiny representation of a sphere is “Australia”, a continent named before a single European was ever known to have set foot on it.

The full story can be found in Australian Geographic #118.