Slang: What Aussies call other Aussies 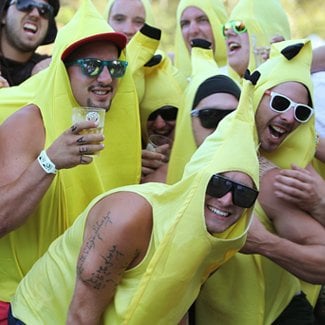 Aussie slang for a person from Queensland: 'Banana-bender'. Image credit: Getty
Reading Time: 2 Minutes • Print this page
From Cornstalks to Banana-benders, Aussies even have lingo for each other.

AUSSIES LOVE TO NOSH up a barbie, gander at some footy, and tell you that Acca-Dacca are fair-dinkum bonza.

They also love their slang. A little-known fact, however, is that Aussies even have lingo for each other…

It was inevitable that the first British settlers in Australia developed a new vocabulary to describe their alien surroundings, given that everything in Australia was so different from all they had known.

Prison slang crept into general use, indigenous language was incorporated, and new words coined – much to the alarm of the anglophile establishment.

The English-born ‘Sterlings’ looked down their noses at the Australian-born folk. They called them ‘Cornstalks’, because the new generation were taller than their forebears. The name stuck, and so did the custom of giving regional names to our fellow Aussies.

We ‘Sandgropers’, or Western Australians, once used the term ‘Wise Men from the East’ in reference to visitors from the other side – especially the ones who enjoyed telling us how we could improve.

The names for Victorians have a bit of a sting to them: Victoria was called the Cabbage Patch because of its small size, hence ‘Cabbage Patchers’ hailed from the garden state. ‘Gum Sucker’ was formerly applied to all colonials for their pastime of sucking the sweet gum from some species of wattle. How it came to refer solely to Victorians is a mystery.

Tasmanians, too, suffered prejudice, and ‘Taswegian’ was once used almost derisively to describe the mob who in kinder moments were called ‘Apple Islanders’. Those Taswegians were once also known as ‘Barracoutas’, after the creature that supported fishing families and was a staple during the starvation years. The name is rarely heard now, and the ’couta, too, have almost vanished.

‘Crow-eaters’ for South Australians is still commonly used, and refers to the magpie on the coat of arms.

‘Top Enders’ for those from the Northern Territory is heard occasionally. ‘Banana Benders’, referring to those from Queensland, is simply not heard enough.

‘Actarians’, for residents of the Australian Capital Territory, was popular for a while but is rarely heard now. The same can be said for the alternative moniker, ‘Roundabout-abouters’.

NOTE: It’s important to mention that state and regional differences between Australians are forgotten in a national crisis or Test match – and when deriding the ‘Whinging Pom’.