Northern Australian aboriginals may have had contact with Indian migrants 4000 years ago, says study.
By Alice McRae with AAP • January 15, 2013 • Reading Time: 3 Minutes • Print this page 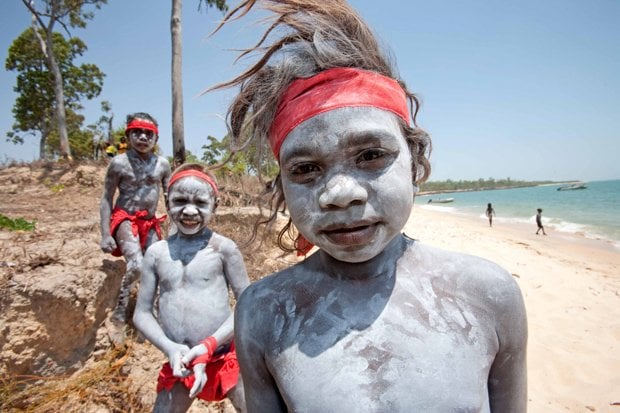 Boys painted with white ochre ready for a ceremony near Maningrida. (David Hancock)

AUSTRALIA MIGHT NOT have been as isolated for the 40,000 years prior to European colonisation as once thought, according to a new study which has found evidence of substantial gene flow between Indian populations and Australia about 4000 years ago.

The research also suggests the dingo might have arrived on Australian shores about that time – along with tool technology and food processing – though other experts are sceptical.

“This is very exciting work and may well resolve a major scientific conundrum.” says Associate Professor Darren Curnoe at the University of New South Wales in Sydney, who adds that scientists have speculated about this possible ancient connection for 200 years.

The study, published today in the journal PNAS, says it was commonly assumed that Australia remained largely isolated following initial colonisation some 40,000 years ago, though the genetic history of Aboriginal people has not been explored in detail.

The authors found a common origin for populations in Australia, New Guinea and the Mamanwa (a Negrito group from the Philippines) and estimated these groups split from each other about 36,000 years ago.

The researchers say this supports the view that these groups represent the descendants of an ancient southwards migration out of Africa. They also found a substantial gene flow from India to Australia 141 generations ago, or 4230 years ago, assuming a generation span of 30 years.

Gene flow from India to Australia

“This is also approximately when changes in tool technology, food processing, and the dingo appear in the Australian archaeological record, suggesting that these may be related to the migration from India,” the authors write, though they add that the Indian genes might not have come directly from India.

These genes could not have arrived during the initial migration to Australia 40,000 years ago because they are absent from the New Guinean and Mamanwa genomes. Also, they are too uniformly spread across northern Aboriginal genomes to have come from European colonists.

Associate Professor Joe Dortch of the University of Western Australia in Perth says the findings are significant, and questions whether there was some kind of migration or simply occasional contact. “It’s not possible to say how the connection to India arose,” he told Australian Geographic.

“But expansion of trading or exploration activity by a culture or group of cultures called the Austronesians may be a factor… [as] the ancestors of northern Australians, like those who were involved in the study, had more contact with Asian peoples than other Australians.”

Associate Professor Jeremy Austin from the University of Adelaide says that the study highlights the fine-scale knowledge that can be obtained from genome data, but adds that the results need to be interpreted carefully.

“The authors do not estimate the number of migrants involved that could have carried this genetic signature from India, “he says. “In theory, this could have been a very small number of people. Thus, any lay-interpretation of the results that boatloads of Indian fishermen arrived on the coast of Australia, bringing new technologies, may not be accurate.”

Could dingoes have arrived with Indian migration?

Jeremy is sceptical about the claims related to the arrival of dingoes in Australia.

“Genetic data for dingoes suggests they came from Island Southeast Asia, not India. So linking the human genetic evidence to the idea that they also imported a range of new technologies and dingoes is something that needs further investigation,” he says.

“The important result of this paper is that it supports previous ideas about trade and movement of people between Australia and Asia over a long period of time.”

The Australian samples came from a broad area of the Northern Territory, and as a result may not be representative of the indigenous populations across the rest of the continent.