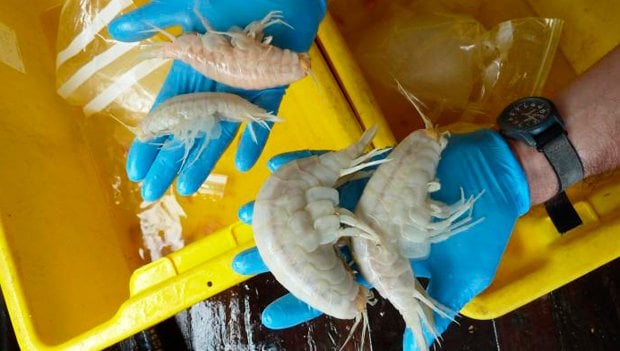 IT MAY BE just 28cm long, but a crustacean found deep in the Kermadec Trench north of New Zealand is a “supergiant”.

An expedition by scientists from the University of Aberdeen in the UK and the National Institute of Water and Atmospheric Research (NIWA) found the rare supergiant amphipod, which dwarf the standard 2-3cm deep sea amphipod and the slightly larger Antarctic “giant” species.

The team was on a mission to recover the deep-sea snailfish, which had not been captured since the early 1950s. Using a camera system and a large trap at depths of 6900m to 9900m, they found the snailfish they were looking for, but were shocked to find the supergiant amphipod among hundreds of “normal” amphipods.

There for a day and gone the next

“At the moment the traps came on deck we were elated at the sight of the snailfish as we have been after these fish for years,” says  team leader Dr Alan Jamieson from the University of Aberdeen. “However, seconds later I stopped and thought ‘what on earth is that?’ whilst catching a glimpse of an amphipod far bigger than I ever thought possible.”

These amphipods are both the biggest specimen ever seen and were found at the greatest depths these animals have ever been caught.

“The surprising thing here is that we have already been to this deep trench twice and never come across these animals before,” he says. “In fact a few days after the discovery we deployed all the equipment again on the same site and we failed to photograph or capture a single supergiant; they were there for a day and gone the next.”

“It just goes to show that the more you look, the more you find,” adds Dr Ashley Rowden from NIWA in Wellington. “For such a large and conspicuous animal to go unnoticed for so long is just testament to how little we know about life in New Zealand’s most deep and unique habitat.”

Supergiant amphipods have been found once before – near Hawaii in the 1980s – and the researchers now want to establish whether the Kermadec amphipods are the same species.