Home Topics Wildlife A guide to the sea snakes of Australia

A guide to the sea snakes of Australia

Australia has an abundance of true sea snakes, with about half of the 70 or so named species found here. They have evolved to fill a wide variety of niches, and although many are not yet listed as endangered, populations are declining.
By John Pickrell • July 2, 2021 • Reading Time: 4 Minutes • Print this page 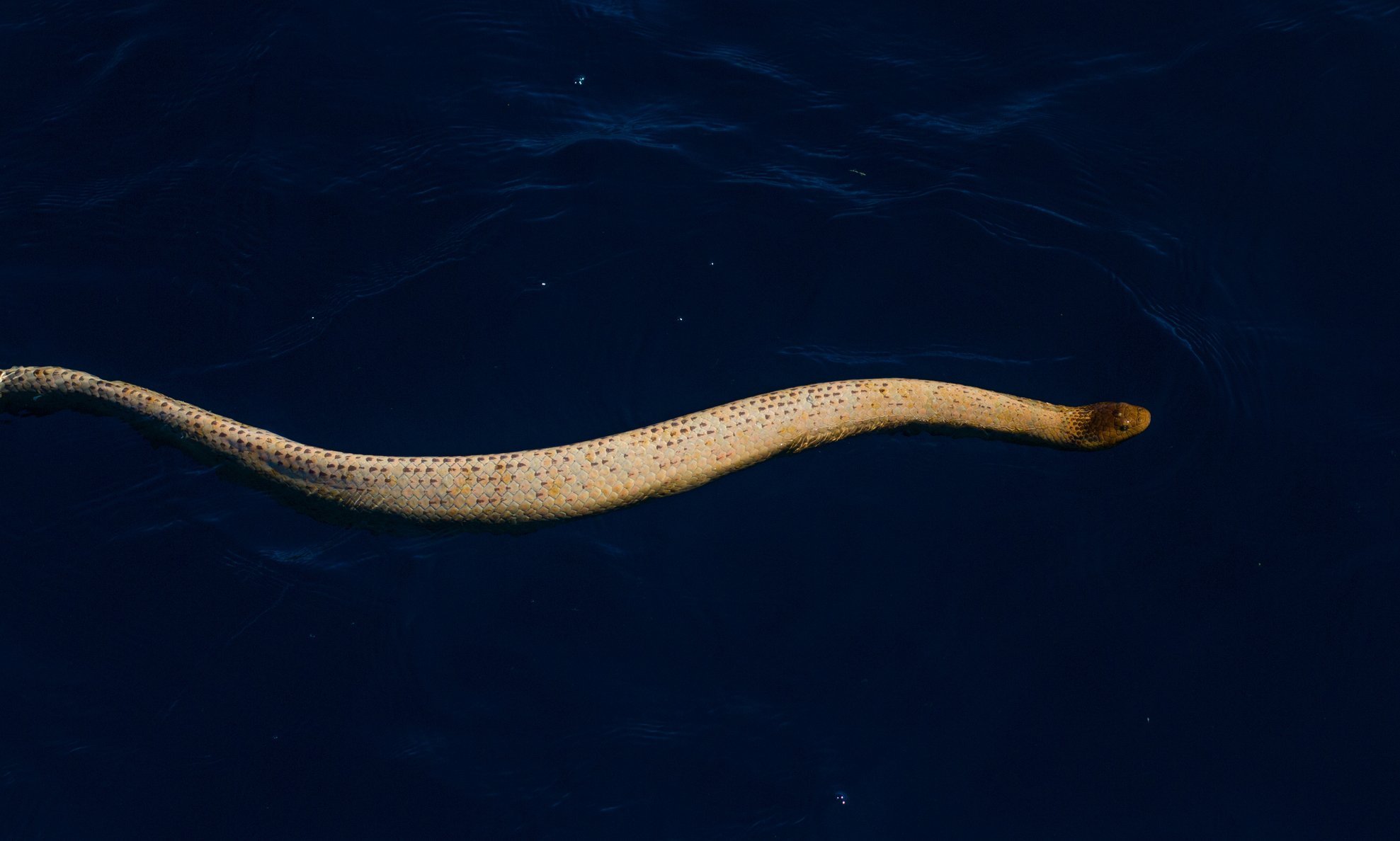 Range: Found around Australia from the Timor Sea to the Pacific Ocean, as well as the Philippines and New Caledonia

This fish egg–eating specialist has relatively weak venom. Males have a spike-like, elongated scale on the upper lip, which is used to scrape eggs off coral, while a sharpened scale on the snout is used to prod females during mating season.

Range: Found widely, from the coasts of Iran and India across Southeast Asia to PNG and Australia

This, the heaviest of all sea snakes, looks more like a moray eel. It has the longest fangs and strongest jaws of any sea snake and feeds on spiny fish such as stonefish, pufferfish and catfish, sometimes impressing fishers by wrangling them near the surface. It is typically light or dark tan in colour, sometimes with dark bands. A striking, jet black form is found on the GBR.

Range: Found from Australia, PNG and New Caledonia to Indonesia, Vietnam, Thailand, the Philippines and Taiwan

Elaborate horn-like scales above the eyes give this sea snake the appearance of a miniature dragon, while its tail forms a wide, flattened paddle. This unusually adorned species waits patiently at the entrance to gobies’ burrows with its long body wafting in the current, as it waits to ambush unsuspecting fish prey.

Has an almost comically reduced head and front third of its body, which allows it to probe eel burrows looking for prey. It has a wide, flattened tail paddle and can have quite striking, spotted, pale and- dark colouration.

Range: Found across Australia to New Guinea and New Caledonia

This relatively large species has an olive-grey body in eastern Australia, but is bright orange to salmon pink in the west. It is one of the sea snakes most commonly seen by tourists. It is seemingly curious and social, often swimming towards and interacting with snorkellers. Hunts around coral reefs for fi sh and (rarely) crustaceans and fish eggs. Naps under ledges.

Range: Across the tropical Indian and Pacific oceans

The most widely distributed of all sea snakes, this open ocean–going species also has the largest range of any snake or lizard. Its ribbon-like body is perfectly suited to life in the open sea, allowing it to swim backwards and forwards at will. It sometimes congregates in huge numbers, forming floating rafts on the sea surface.

Range: Found along the WA coastline

Originally one of the most abundant sea snakes at Ashmore Reef in the Timor Sea, it was thought to have gone extinct, but was recently rediscovered off the northern coast of WA. This fish-eater has pronounced overlapping scales that have a leaf-like appearance and small fangs.

The longest of all sea snakes. It has large-scale sensilla, dorsal stripes and a flattened tail paddle that aids with swimming. It is commonly caught as bycatch by trawlers and strands on coastlines in Queensland and WA, meaning it is often spotted by beachgoers.

Range: From PNG and Australia to New Caledonia

Also known as the reef shallows sea snake, it is among the three most venomous snakes in the world after Australia’s inland taipan and eastern brown snake. It feeds on a variety of bottom-dwelling fi sh, including moray eels and is known to suddenly plunge into burrows, leaving a cloud of sand, as it hunts.