James Dorey became the first person in nearly a century to see an Australian cloaked bee. This is his remarkable story of rediscovering a species thought to have disappeared from the planet forever.
By James Dorey • May 7, 2021 • Reading Time: 4 Minutes • Print this page 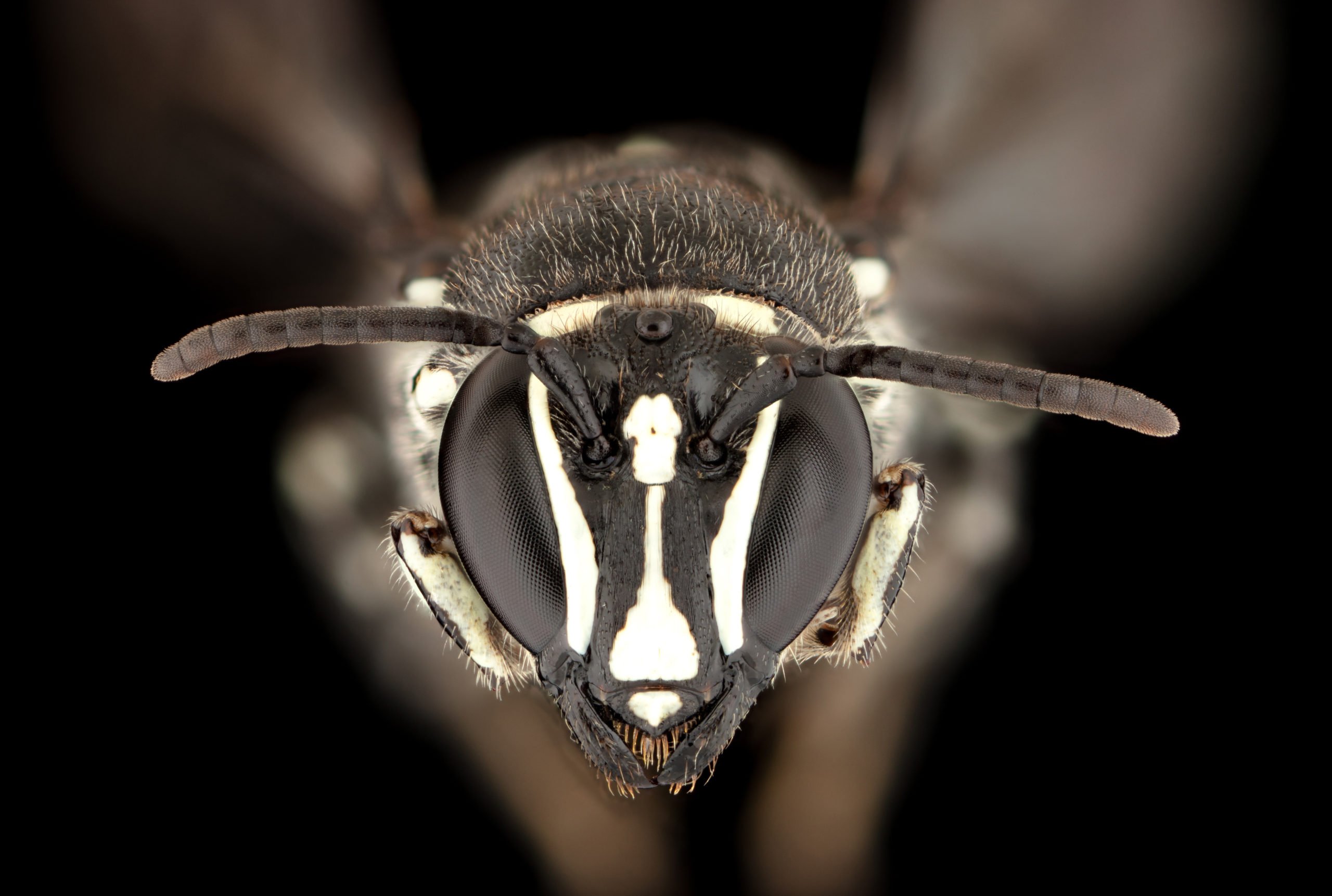 A close-up photograph by James Dorey of a male cloaked bee. This species hadn’t been seen for almost 100 years. Image credit: James Dorey

I WAS 10 WEEKS into fieldwork driving from Adelaide to far north Queensland sampling sites for native Australian bees in February 2019, when I made a discovery that took my breath away.

Like most mornings, I’d been up sampling early, this time along the edge of remnant rainforest habitat at a place called Hallorans Hill Conservation Park, in the town of Atherton, south-west of Cairns.

As I stalked the forest’s edge, butterfly net in hand, a flash of motion caught my eye and a bee alighted on a nearby leaf. My reflexes kicked in and I made a quick upward sweep. I’ve been studying native Australian bees for nearly seven years and a glance was all I needed to arouse my suspicion.

Catching my breath and with my heart pounding I ran back to my van. There I quickly put the little insect in a vial before placing it in the fridge to wait, impatiently, for the few minutes needed to slow it down enough for me to be able to examine it properly.

It was a robust black and white ‘masked’ bee, which narrowed down the likely species. But I’d been fooled before. I removed it from the vial, placed it under my microscope and gasped audibly as I realised what I might have found. It was almost certainly of the genus Pharohylaeus, which has only one species known in Australia, lactiferous, and that hadn’t been found since 1923.

My friends and fellow bee researchers Tobias Smith and Olivia Davies had only recently been lamenting the possibility of the genus’s extinction in Australia. And I had grown to fear the same. So within moments I was sending excited texts to Toby and Liv and it wasn’t long before my suspicions were confirmed.

It took another two days before I found more samples – this time, males flying circuits around a firewheel tree just 200m from where I’d found the first. Between that summer and the next, I found three populations of the cloaked bee, in Atherton, Kuranda and Eungella. And despite sampling lots of other vegetation across 225 sites, I found the bees coming to only one other plant species – the Illawarra flame tree.

Certainly, we know very little about many of our incredible native bees. But why hadn’t this species been found for so long? Six individuals had been collected on three separate occasions by two collectors between 1900 and 1923. Then there wasn’t another sighting until mine, nearly a century later. Why? Is this bee species simply rare, or is it in trouble?

I began looking for answers in the plant species that seemed to be associated with the bee – the firewheel and Illawarra flame trees. Having vibrant red flowers, both are thought to be pollinated by birds, not insects.

Melittologists (people who study bees) tend to avoid such apparently bird-pollinated plants. And it’s also not surprising no-one would have looked for the species in trees with red flowers because until recently it was thought bees can’t detect red light.

Instead, most see further into the UV spectrum. But a scientific paper published in 1998 and aptly titled “Bees See Red” explained how red flowers might be quite clear to bees when against a bright background. So cloaked bees might be picky eaters that target unusual plants. That, coupled with the preconceptions of melittologists, could partly explain why no-one had seen these bees for so long.

Another reason the bees might have avoided detection could be that they occur in a restricted habitat. I only found the species within 200m of one rainforest type. This could suggest potential habitat specialisation, which might leave the species vulnerable to disturbance. Some digging around revealed the rainforest type where the cloaked bee has been seen has undergone much habitat destruction and fragmentation since European arrival. It was also burnt in Queensland annually between 1988 and 2016. And the Black Summer fires almost doubled the area of this rainforest type that was burnt compared with the previous highest record year (2002).

So the cloaked bee seemed to be be a floral specialist restricted to a habitat that appears to have become severely reduced and fragmented. On top of that, rainforest is particularly sensitive to fire. It’s not hard to imagine how a population of these bees could disappear if the wrong rainforest patch was burnt or cleared for development. Where I first ‘rediscovered’ the bee is a tiny rainforest fragment surrounded by human-altered habitat.

All these factors might indicate a species that could be threatened or become threatened. Yet we know so little about its biology that drawing a complete picture is difficult.

Related: How to photograph bees

What can we do to help this and other native Australian bee species?

Increased funding for museums to identify and digitise their collections would be a massive first step. There might be cloaked bee specimens sitting in a museum storage drawer right now.

More sampling to learn about the biology and distribution of this poorly known bee species would help clarify threats to it, and how these could be reduced. And examination of the species’ genetics could uncover clues about its past.

So for now, the case of the cloaked bee is far from closed. But rest assured, the investigation to lift the shroud of mystery is ongoing.