Home Topics Wildlife An Amelia Earhart conspiracy, a missing rifle and powerful pincers: the coconut crab is an icon

An Amelia Earhart conspiracy, a missing rifle and powerful pincers: the coconut crab is an icon

The largest crustacean in the world, coconut crabs have even bigger reputations.
By Angela Heathcote • June 3, 2020 • Reading Time: 3 Minutes 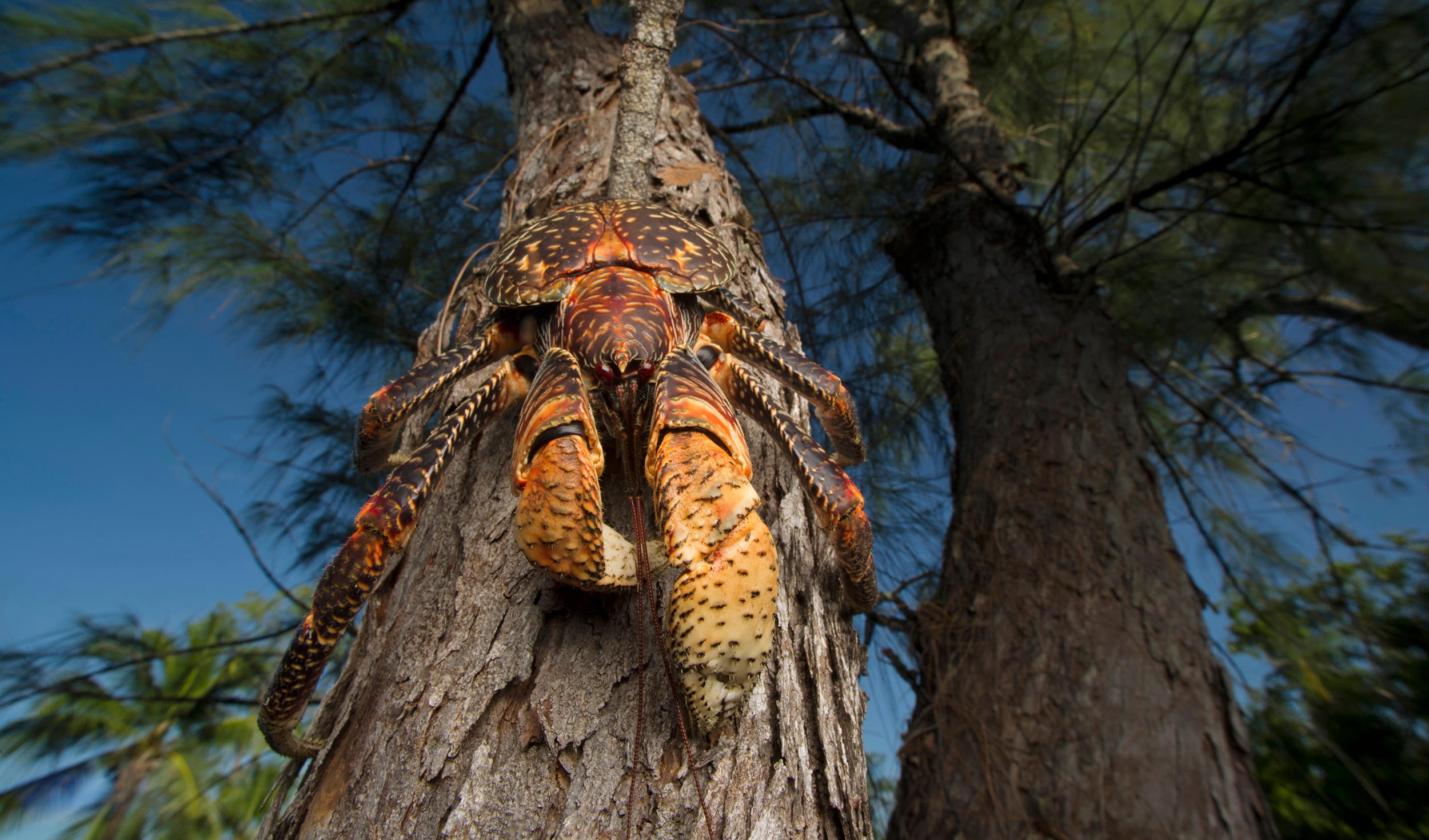 IT TOOK ME a while to realise just how gargantuan robber crabs are. That was, until I came across an image of one climbing up a car door, attempting to get through the window to steal some coconuts. Its large body, against that door for size comparison painted a vivid picture.

Weighing up to 4kg and spanning up to 1m in length (claws included), these animals are hard to miss. But the robber crab, otherwise known as the coconut crab, isn’t just absurd in terms of its size. It can be seen climbing up palm trees, prying open the shell of a coconut and dishing out the flesh with its large pincers, which have the bone-crushing force of approximately 3000 newtons. For comparison, the strength of a human grip is only 300 newtons.

The absurdness doesn’t stop there though. While the robber crab mostly enjoys chowing down on fleshy fruits, it’s an omnivore, making it quite the opportunist. In 2016, a scientist captured footage of a robber crab attacking a red-footed booby, crushing its bones and clipping its wings. Other times, they’ve been seen devouring pig carcasses and turtle hatchlings.

This diet has led to some significant conspiracy theories, the most prominent being that the coconut crab may be behind the disappearance of the famous aviator Amelia Earhart. As the story goes, Earhart made an emergency landing on Nikumaroro Island in the Republic of Kiribati, where she’s believed to have perished. However, her remains have never been found. That’s where the robber crabs come in.

It may seem ridiculous, but the theory actually has legs. Members of the International Group for Historic Aircraft Recovery (TIGHAR) have led countless expeditions to the island, supported by National Geographic. Some of their experiments (involving the pig carcass I previously mentioned) demonstrated that the coconut crabs were capable of polishing off a carcass within two weeks, and were capable of dragging bones.

In 1940 a partial human skeleton was found on the island, but the bones were subsequently lost. TIGHAR hopes to find more remains buried long ago in the burrow of a coconut crab, and on its last expedition enlisted dogs from the Canine Forensics Foundation to assist them, but it would seem that the crabs are just as good at hiding as they are at robbing.

A little closer to home, you can find the coconut crabs living it up on Christmas Island (CI) where, according to Parks Australia, the world’s largest and best-protected population exists, some living to 50-plus years. Max Orchard, a former Christmas Island National Park ranger, has encyclopaedic knowledge of the crabs of CI, and has witnessed the antics of the coconut crabs firsthand, particularly in relation to their incredible sense of smell, which is known to cover several kilometres.

“It’s phenomenal,” Max says. “Our home backed onto the rainforest and when my wife baked bread, we’d find them locked onto the back door. When we had chooks, they’d pinch their way through the chicken wire to eat the pellets. They’re very intuitive animals.”

Being the park ranger, Maxalso had his fair share of complaints, but one in particular stands out.

“Not long after I arrived, the Australian Army would send out troops to do some training in isolated areas like Christmas Island,” he says. “One time they sent the SAS. They’d just been issued with new rifles and had based themselves in the rainforest.

“Not long after their arrival, the commanding officer came into my office highly upset, telling me someone had stolen a rifle and that we’d need to start a police inquiry. I said, ‘the crabs probably carted it away’, and lo and behold we found a chewed up rifle just metres from their camp.”

As for whether Max believes in the Amelia Earhart conspiracy, he says he wouldn’t be surprised. “Over my 25 years as a park ranger on Christmas Island, I witnessed many missing persons’ cases that had never been solved due to lack of evidence. Given the crabs’ well-known behaviours, there’s a chance that they could be partly involved in that.”

Overall, Max has developed an affection for the gentle giants. “They’re so ugly they’re cute. They’re real characters, the thinking man’s crab. They know what they’re about, they know they’re the highest on the pecking order, so they strut about accordingly.”

See more
Scientists have invented a way to save a little Australian bird from a blood-sucking maggot
The head-stacking caterpillar wears its old heads as a hat
Back to the Moon: Australia’s mining expertise at forefront of new era of space exploration
Orchid mantis babies are strange little aliens
An intimate look at the challenges of caring for wildlife amid a pandemic
It’s official: Australia is home to a fly named after Deadpool
Highest ice dome on the Antarctic Plateau best place to view stars
The mystery of the Top End’s vanishing wildlife
The golden fruit dove looks like it belongs in a fairy tale
‘Switch off that porch light’: study reveals light pollution in cities has urban birds tossing and turning
A concise history of Antarctic exploration
Rare baby sunfish reveal early life of one of the ocean’s weirdest fish
This year’s best astrophotography
Meet Moss, the detection dog helping Tassie devils find love
Meet the the ‘savanna glider’: Scientists have discovered sugar glider is actually three species