The rakali, a native water rat, found feasting on cane toads in the Kimberley 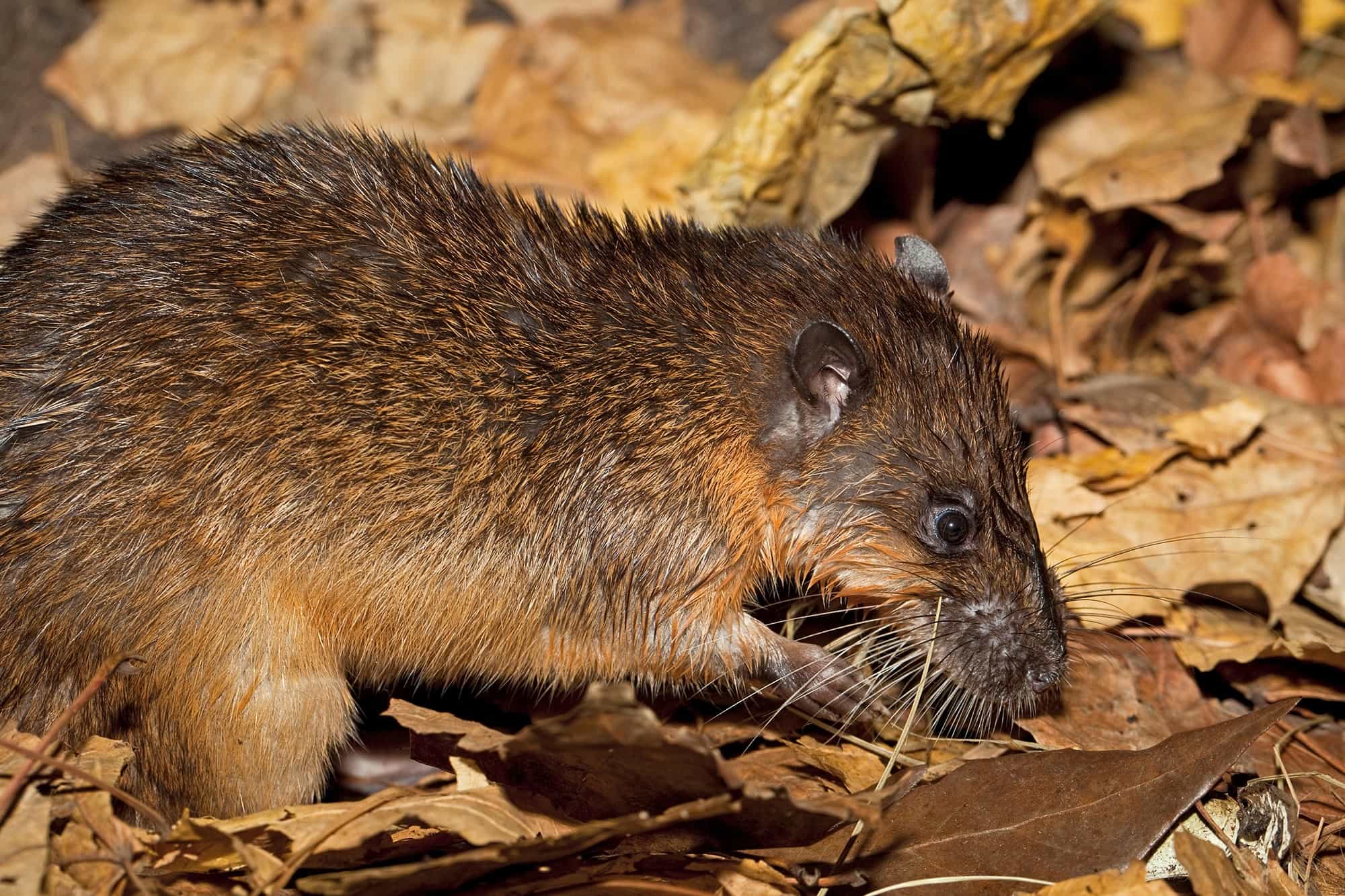 Image credit: Rod Williams/Alamy
Reading Time: 4 Minutes • Print this page
As if we didn’t already love Australia’s native water rats enough, the rakali has now been seen preying on one of Australia’s most invasive species, the cane toad.

AUSTRALIA’S WATER RATS or Rakali, are one of Australia’s beautiful but lesser-known native rodents. And these intelligent, semi-aquatic rats have revealed another talent: they are one of the only Australian mammals to safely eat toxic cane toads.

Our research, published today in Australian Mammalogy, found water rats in Western Australia adapted to hunt the highly poisonous toads less than two years after the toads moved into the rats’ territory.The rats, which can grow to over 1kg, are the only mammal found to specifically target large toads, neatly dissecting the toads to eat their hearts and livers while avoiding the poisonous skin and glands.

Water rats are nocturnal and specially adapted to live in waterways, with webbed feet and soft water-resistant fur. Their fur is so impressive there was once a thriving water rat fur industry in Australia.

They can be found in lakes, rivers and estuaries, often living alongside people, in New South Wales, Queensland, Tasmania, South Australia, far north and southwest Western Australia, the Northern Territory, and Victoria, where they can even be seen along St Kilda Pier.

Water rats are also highly intelligent, as shown by their rapid adaptation to hunting and eating one of Australia’s most toxic introduced species – the invasive cane toad.

Cane toads were introduced to Australia in 1935 in an ill-fated attempt to control the cane beetle. They have spread across the north of the country at up to 60km per year, leaving devastation in their wake. Many native species, such as northern quolls, yellow-spotted monitors, and crocodiles, have suffered widespread declines, and in some cases local extinctions, as a result of eating cane toads.

The toads secrete a toxin in their parotoid glands (on the back, neck and shoulders) that can be fatal even in very small doses.

Eat your heart out

Cane toads arrived at our field site in the Kimberley, Western Australia, in 2011-12, leading to a crash in the populations of predators including numerous lizards and northern quolls.

However, in 2014 we found a creek dotted with the bodies of cane toads that had clearly been attacked. Every morning we discovered up to five new dead toads with small, near-identical incisions down their chest in just a five-metre stretch of creek. What was using almost surgical precision to attack these toads?

Post-mortem analysis showed that in larger toads the heart and liver had been removed, and the gall bladder (which contains toxic bile salts) neatly moved outside the chest cavity. In medium-sized toads, besides the removal of the heart and liver, one or both back legs had been stripped of their toxic skin and the muscle also eaten.

The finding intrigued us enough to dissect waterlogged and rotting toad bodies in 40℃ heat. Using remote infrared camera footage and analysis of the bites left on the muscle, we found our clever attacker – the native water rat!

What kind of toads are rats eating?

While there have been anecdotal reports of water rats eating toads in Queensland and the Northern Territory, there were no published reports of this in Western Australia, where the toad was a more recent arrival.

We also didn’t know whether rats could tolerate the toad toxins, or were targeting non-toxic parts of the body. And we wanted to find out whether the rats were targeting small (and less toxic) toads, as some other rodent species do, or were deliberately going after larger toads which are a better source of food.

But despite medium toads being far more common, three quarters of the dead toads we found were large, and the remainder were medium. No small toad bodies were found or observed being attacked.

While some species, such as keelback snakes and several birds (including black and whistling kites, and crows) can eat cane toads, there has been less evidence of mammals hunting this new type of prey and living to tell the tale.

Some rodents can eat small juvenile toads, but no rodents have been documented specifically targeting large toads. In our case, water rats preferred to eat large toads, despite medium-sized toads outnumbering them by 27 to 1.

We’re not sure whether water rats have very rapidly learned how to safely attack and eat cane toads, or if they are adapting a similar long-term hunting strategy that they may use to eat toxic native frogs.

Water rats are very well placed to pass on hunting strategies, as they care for their offspring for at least four weeks after they finish producing milk. This could help spread the knowledge of toad hunting across streams and creeks over time.

While this behaviour seems to be confined to local populations, if these tactics spread, water rats may be able to suppress toad populations when they reach water bodies – another small line of defence against this toxic killer.