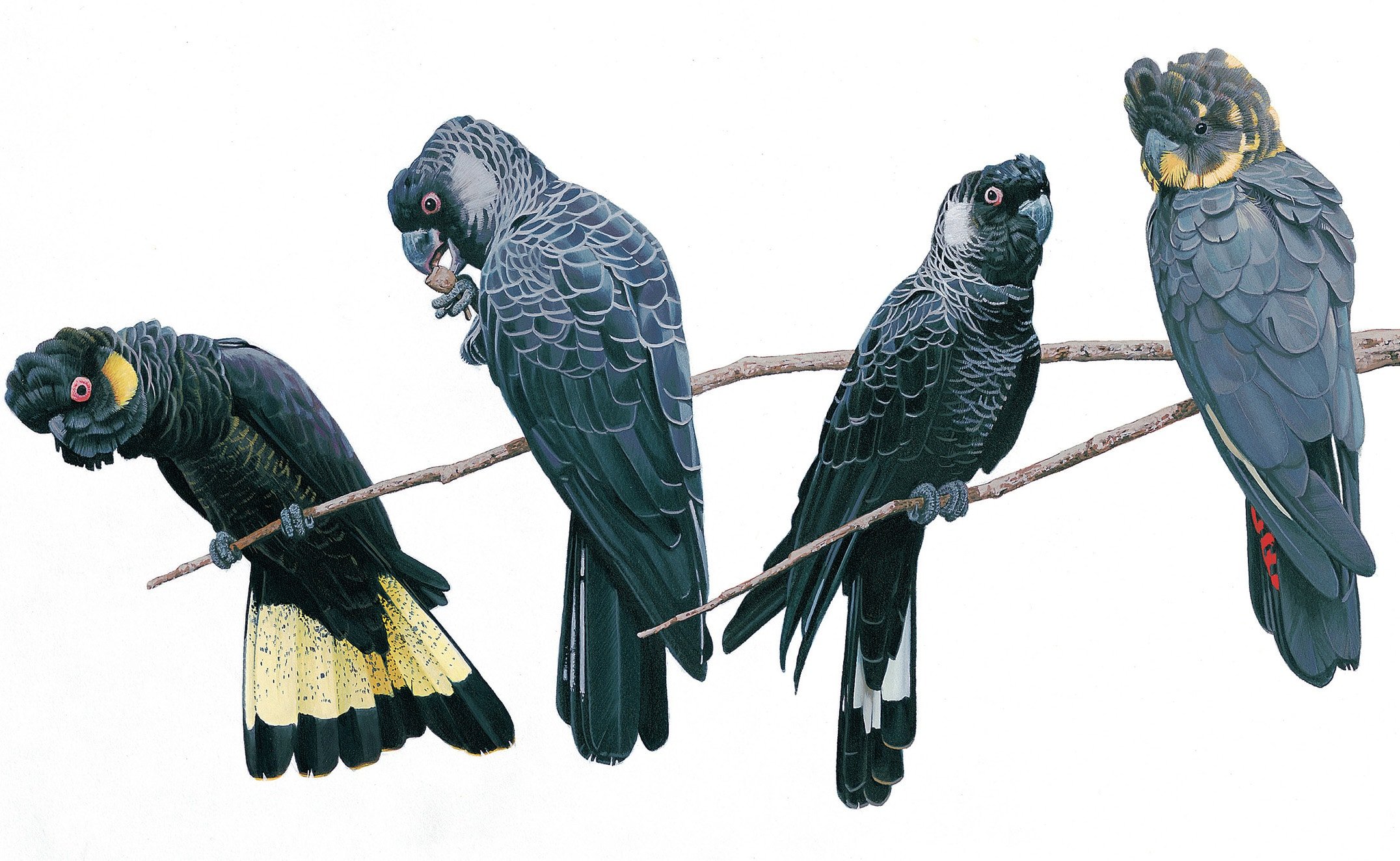 All black cockatoos fall into the genus Calyptorhynchus. While there are other black-coloured cockatoos, like the palm cockatoo, they aren’t consider to be black cockatoos.

Black cockatoo expert Erika Roper from the University of Western Australia has been working with these birds for four years, but has had a lifetime affinity with them. “Growing up near Canberra we would have yellow-tails visit our pine trees a few times a year and I’d run outside as soon as I heard them coming,” she says.

Erika now lives in Perth where much of her studies have focused on the forest red-tailed black cockatoo species (Calyptorhynchus banksii naso) in south-western WA, many of which have taken up residency in metropolitan areas.

Over her studies, Erika has seen some of their complex social behaviours play out. Erika’s favourite is her ‘Nut Theft’ story.

“I was watching a family group of cockatoos feeding in a marri, happily chomping away on the large gumnuts. All of a sudden another family group flew in, calling to announce their arrival,” Erika says.

“A juvenile from the second group made a beeline to the female in the first group and attempted to steal the gumnut she was eating. A brief tug-of-war ensued. The juvenile won. It then walked a few steps away and proceeded to drop the gumnut without eating it.”

But Erika’s witnessed the sweet times as well. “Allopreening is where one cockatoo will preen another, as a form of social bonding. They’re so gentle with their huge beaks, and you can really see the attachment between individuals,” she says.

Despite their icon status, many of the species and subspecies of black-cockatoo are threatened to some degree, Erika says.

“They all face different threats and challenges, such as habitat loss and degradation, highly specialised diets, car strikes, as well as climate change which affects all species.

“Some species are also threatened by poaching and egg theft, and others are killed illegally by producers because they damage crops, for example, some orchardists shoot Baudin’s black cockatoos because they like to eat apples.”

Get to know and appreciate our beautiful black cockies below.

As the name suggests, red-tailed black cockatoos are recognisable for their gorgeous orange-to-red tail feathers that often resemble sunsets. Their crests, protruding past their bill in a regal-like fashion, are unlike any other black cockatoo crest. The females are equally as beautiful, their feathers tipped with a golden yellow. There are four subspecies in existence; Calyptorhynchus banksii banksii in Queensland and northern New South Wales, C. b. graptogyne of Victoria and South Australia, C. b. macrorhynchus of northern Australian, the C. b. naso of Western Australia and C. b. samueli, mostly found in central Australia and parts of WA. According to the Australian Museum, the main threats to these cockatoos are habitat modification and clearing for agriculture or forestry.

The yellow-tailed black cockatoo, with its golden cheek patches and beautiful yellow tail feathers, is an Aussie favourite. There are two subspecies: C. f. funereus found in New South Wales and Victoria, and C. f. xanthanotus of Tasmania. Peculiarly, these birds are currently thriving in Sydney in places such as Centennial Park where there is an abundance of pine cones for them to feast on. Watching these cockatoos peel bark off trees to access bugs is quite the sight. Despite recent adaptations to urban life, their numbers are still falling due to land clearing for development.

Compared to the red-tailed black cockatoo, the glossy black cockatoo has a short, mohawk-like crest. Male adults often have brown-coloured heads while females sport blotches of yellow. There are two subspecies including C. i. erebus of south-east Queensland andC. i. halmaturinus, which only exist on Kangaroo Island, just off South Australia. Several populations of glossy black cockatoo are under a lot of pressure from developmental land clearing, particularly in parts of Queensland and New South Wales. The Kangaroo Island population are preyed upon by possums, but breeding programs are having some success in increasing numbers.These cockatoos love the casuarina woodlands, hanging in the trees and feasting on cone-shaped seeds, for which they have the perfect broad bill.

Recognisable for its white cheek patches and white tail fathers, these black cockatoos can only be found in the south-west of Western Australia. According to the website Birds in Backyards, the Carnaby’s is sometimes referred to as the ‘rain bird’ as it often migrates to higher rainfall areas after breeding in summer. The birds rely heavily on remnant native eucalypt woodlands for breeding and feeding, although destruction of these areas within its habitat range has impacted population size. The rarity of the species has also driven its popularity in the illegal wildlife trade.

Call: Similar to the Carnaby’s, but supposedly shorter

The Baudin’s black cockatoo is very similar in appearance to the Carnaby’s black cockatoo, however the latter is said to have a narrower bill. Both are restricted to a small part of the south-west of Western Australia. Baundin’s only nest in jarrah and marri trees that are at least 200 to 500 years old, which impacts their ability to breed. In 2018, their conservation status went from vulnerable to endangered. Beyond its habitat preferences, little is known about the bird’s behaviour and that the bird is so enigmatic, WWF says, makes it all the more difficult to conserve. In partnership with WWF, Murdoch University is now tracking it to better understand the cockatoo’s behaviour.

This article is based on information from The Australian Bird Guide by the CSIRO.