A guide to Australia’s fairy-wrens 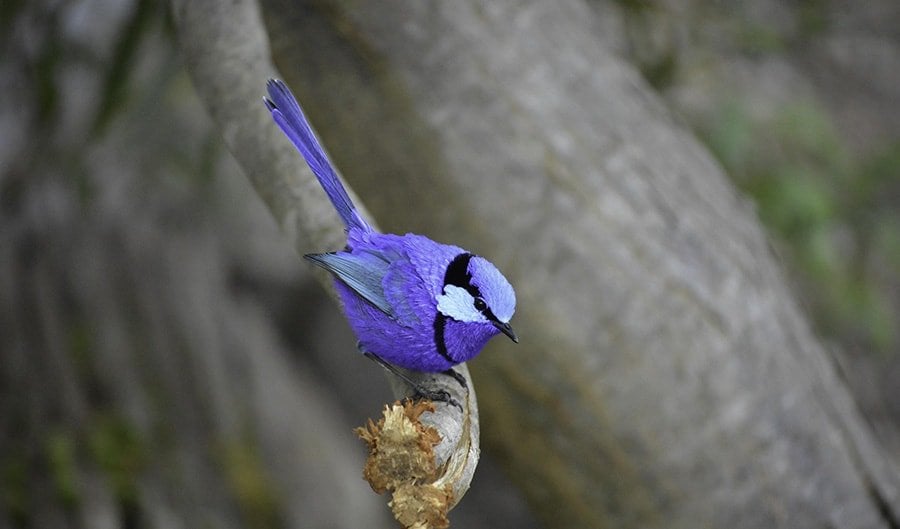 A male splendid fairy-wren. Image credit: Mark Eatwell
Reading Time: 3 Minutes • Print this page
Fairy-wrens are among the most beautiful birds in Australia, (some) with their electric blue plumage, but they have quirky personalities too. Here, you can get to know all 10 species.

Recognisable by their sky blue-coloured caps, which become iridescent during breeding season, the superb fairy-wren is much loved among Australians. This fairy-wren can be found across south-east Australia and enjoys a shrubby understorey where they move about in small groups. New research has revealed that male fairy-wrens sing to their eggs and their chicks come out recognising their parent’s unique song.

Splendid fairy-wrens are arguably the most beautiful species of fairy-wren. Besides some brown feathers on their wings and their white bellies, they are almost completely electric blue. They can be found in almost every state and territory except Tasmania. Interestingly, to attract females, males sing their sexual display songs when predators are nearby to show bravado.

This fairy-wren has a striking purple crown, making it spectacularly different from every other fairy-wren. There are two subspecies of the purple-crowned fairy-wren, one that lives in the Kimberley region of Western Australia and the other in the Victoria River District of the Northern Territory, and both live in strips of vegetation along creeks. The purple-crowns take only one mate, which they stay close to for most of their lives, while other fairy-wrens are known for their promiscuity.

Like the purple-crowned fairy-wren, the red-backed fairy-wren is strikingly different in colour from other fairy-wrens. During the breeding season males have a bright, crimson-red back, brown wings and black tail feathers, making them the only fairy-wren with absolutely no blue plumage. It’s also Australia’s smallest fairy-wren. You’ll often find them in grassy understorey in northern and eastern Australia.

The white-winged fairy-wren, similar to the splendid fairy-wren, has intense blue colouring, and white wings. They can be found across all Australian states and territories, except for Tasmania. One subspecies located on Dirk Hartog Island, rather than being bright blue, is black with white wings.

The lovely fairy-wren looks very similar to a superb fairy-wren, but it has a very short tail in comparison. It is one of four chestnut-winged fairy-wrens, which includes the variegated, blue-breasted and red-winged fairy-wren. It’s endemic to north-eastern Queensland and is recognised as the most arboreal (living in trees) species of fairy-wren, however it never ventures too far into the rainforest, preferring the shrubby areas on the outskirts.

This fairy-wren has a very long blue tail, but otherwise is difficult to differentiate  from the splendid and lovely fairy-wren. It can be found across all Australian states and territories, except for Tasmania. Rather than living among grasses, this fairy-wren is considered to be quite shy, preferring the thickets of shrubs that provide more protection. They also don’t wander too far or for too long outside this habitat. Adding to their shy demeanour, they’re also known to be less vocal than other fairy-wrens.

In 2018, the purple-backed fairy-wren was finally declared a new species, after being incorrectly labelled a variegated fairy-wren prior to the new discovery (they look very similar). You can read about the news here.

The red-winged fairy-wren is recognised for having the lightest blue helmet, and deep chestnut-coloured wings. It’s also recognised as having the longest tail out of the chestnut-winged fairy-wrens, adding to its recognisability. It’s restricted to small patches located in the south of Western Australia, where they prefer to live in karri forests. Here, they are known for being the only fairy-wrens with all-black bills.