Home Topics Wildlife You may know rainbow lorikeets, but what about all the other lorikeets?

You may know rainbow lorikeets, but what about all the other lorikeets? A scaly-breasted lorikeet. Image credit: dirkr/Shutterstock
Reading Time: 4 Minutes • Print this page
Australia is home to seven species of lorikeet, of which the rainbow lorikeet is the best known.

LORIKEETS ARE possibly Australia’s fruitiest coloured birds. Bright blue, orange, yellow and green in colour, Australians have a lot of affection for these gorgeous birds.

The most commonly known is the rainbow lorikeet, which also happens to be the biggest and brightest. However, if you’re not an avid birder, you may not know that Australia is actually home to a total of seven species of lorikeet.

The coconut lorikeet is relatively similar looking to the rainbow lorikeet, however, it has a black belly, a noticeably shorter tail and a little less blue on its head.

The coconut lorikeet can’t be found anywhere on the Australian mainland, but is widespread across New Guinea and in the north end of the Torres Strait Islands. 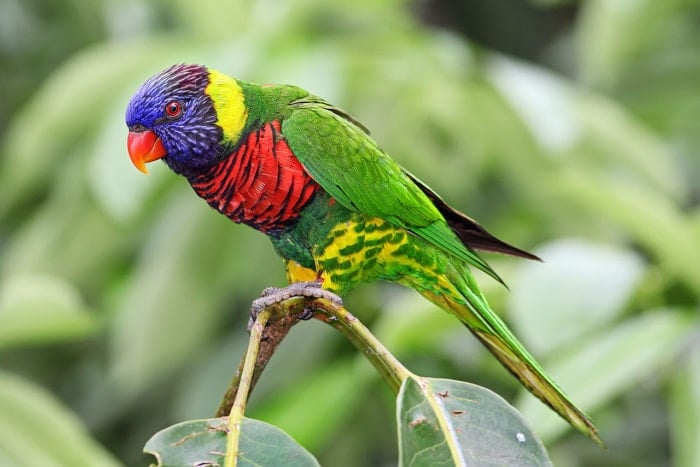 As you probably guessed, this lorikeet is easily recognised by the vibrant red collar it has around its neck, differentiating it from other species of lorikeet.

It’s restricted to the northern parts of Australia, from the Kimberleys in Western Australia to the coast of the Gulf of Carpentaria, where they hang in really noisy groups. The scaly-breasted lorikeet is markedly different from other lorikeets. These guys are covered in green feathers with little streaks of yellow. Their underwings, however, are a mixture of red, orange and black.

They can be found all the way down the east coast of Australia, preferring lush eucalypt forests and woodlands where they can hang out in some melaleucas. And they can often be found mingling with other species of lorikeet. Like the scaly-breasted lorikeet, the varied lorikeet has an almost totally green body, but its head is a tropical cocktail of colour, made up of red, blue and violet shades. It also has some yellow streaking across its upper body.

This guy is endemic to northern Australia including north Queensland, the Northern Territory and Western Australia, where it can be seen among eucalypt and paperbark blossoms. The musk lorikeet is unlike any other lorikeet in Australia. It has a bright red marking on its face that makes it look like the bird is sporting an eye mask, and an exclusively pastel blue-coloured crown.

Weirdly, this lorikeet doesn’t mind feeding on the odd insect, unlike other lorikeets that will usually feed exclusively on nectar. They can be seen occupying the lower parts of South Australia, Victoria, New South Wales and Queensland. The purple-crowned lorikeet has to be the cutest lorikeet, with its namesake pale purple-coloured crown, yellow spotted cheeks and greeny-blue breast.

It can be found across parts of South Australia, however, this guy is often referred to as a ‘blossom nomad’, often congregating in large numbers in areas it hasn’t visited for long periods of time. As its name suggests, the little lorikeet is Australia’s smallest lorikeet. Bright green, with a red face mask (encircling the beak, and not across the eyes like the musk lorikeet), this species  races through flowering eucalypts, almost impossible to see.

Just as they’re the smallest, little lorikeets are also the least abundant lorikeet species, but can be found scattered across the east coast of Australia. Like the purple-crowned lorikeet, they’re considered to be nomadic. Rainbow lorikeets are one of the most widespread birds in Australia, in fact, in 2017 it was the most counted bird in BirdLife Australia’s annual Backyard Bird Count.

These guys are even considered pests in some states. The rainbow lorikeets around Perth, for example, descended from cage birds that escaped and have been damaging stone fruits and other crops since. The information for this article came from The Australian Bird Guide, published by the CSIRO in 2017.