Throw out all your preconceptions about pigeons, because Australia’s rainforest pigeons are some of the most striking birds in the world.
By Angela Heathcote • August 17, 2018 • Reading Time: 3 Minutes • Print this page THE PIGEONS MOST Australians are familiar with are the rock doves (Columba livia), commonly referred to as “feral pigeons”, that swamp our cities in huge numbers, eating anything and everything they can get their beaks on.

Like many other species of pigeon, this is what makes them such a successful species: their ability to adapt to any environment, whether that be city, desert or country. Most of these birds are considered ‘unremarkable’ in colour, unlike their rainforest counterparts.

There are nine species that reside deep within Australia’s rainforests, however only three are considered arboreal (tree-dwelling) rainforest pigeons– the superb fruit dove, the rose-crowned fruit dove and the wompoo fruit dove– and these species tend to turn people’s understanding of pigeons on its head. Ornithologist and author of Pigeons and Doves in Australia, Joseph Forshaw, has seen this many times. “If somebody sees a superb fruit dove (Ptilinopus superbus) or a wompoo fruit dove (Ptilinopus magnificus) for the first time they really can’t associate it with a feral pigeon,” he says. “But when you look at them they share the same anatomical features making them a pretty uniform group apart from the difference in plumage.”

The only other major difference, Joseph says, is that while species like the rock dove and crested pigeon forage on the ground, rainforest pigeons stay high in the rainforest canopy, feasting on native fruits and berries. “They swallow the fruits whole and the seeds are passed through them. This makes them assistant propagators of rainforest plants.” 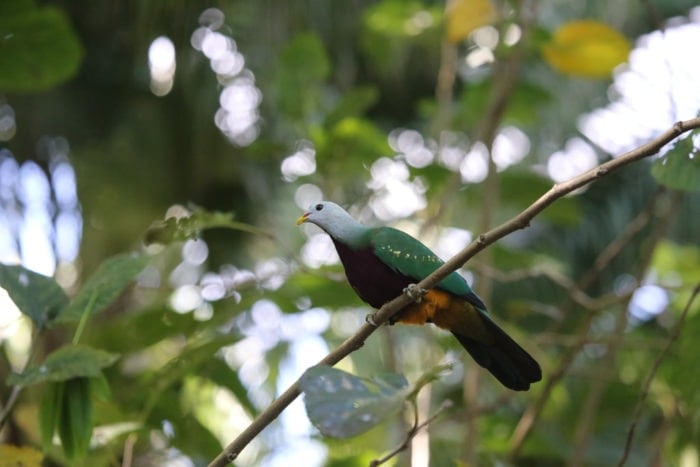 Rainforest pigeons: heard but not seen

The most spectacularly coloured are the wompoo, the superb fruit dove, the rose-crowned fruit dove (Ptilinopus regina) and the green-winged pigeon (Chalcophaps indica), all with bright, somewhat fruity-coloured plumage, which allows them to blend into the rainforest canopy. In fact, much of what we know about rainforests pigeons is from captive populations, rather than those observed in the wild, as they’re so difficult to spot.

Back in the 1980s, legendary CSIRO scientist Harold Frith published the first book on pigeons and doves in Australia. Joseph, a student of Harold’s, says Harold spent countless hours observing the behaviours of these pigeons.

“He had a huge rainforest aviary and he looked at it from a window in his office and he’d always have a camera. All these fruit pigeons would visit him and he just watched their courting and breeding behaviours, which he documented extensively.” 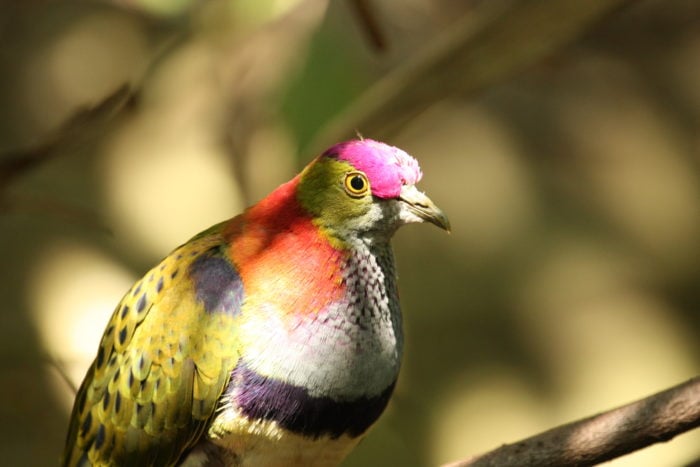 According to Joseph the only real way to know you’re in the presence of a rainforest pigeon in the wild is the sound of its call. He says the song of the wompoo fruit pigeon, nicknamed “Bubbly Mary” by locals for its sound, is well-known to the old bushmen.

Three species of rainforest pigeon – the wompoo, white-headed pigeon (Columba leucomela) and top-knot pigeon (Lopholaimus antarcticus) – were hunted by these bushmen for their “tasty” meat, says Joseph, adding that in many areas they’re still hunted.

Thanks to Camphor laurel (Cinnamomum camphora), a highly invasive weed, Joseph says the birds have been able “save themselves”.

“The three tastiest species have become very fond of the fruits of the Camphor laurel, which makes the birds taste absolutely awful, so they’ve really done themselves a favour.”