The science behind ant vision 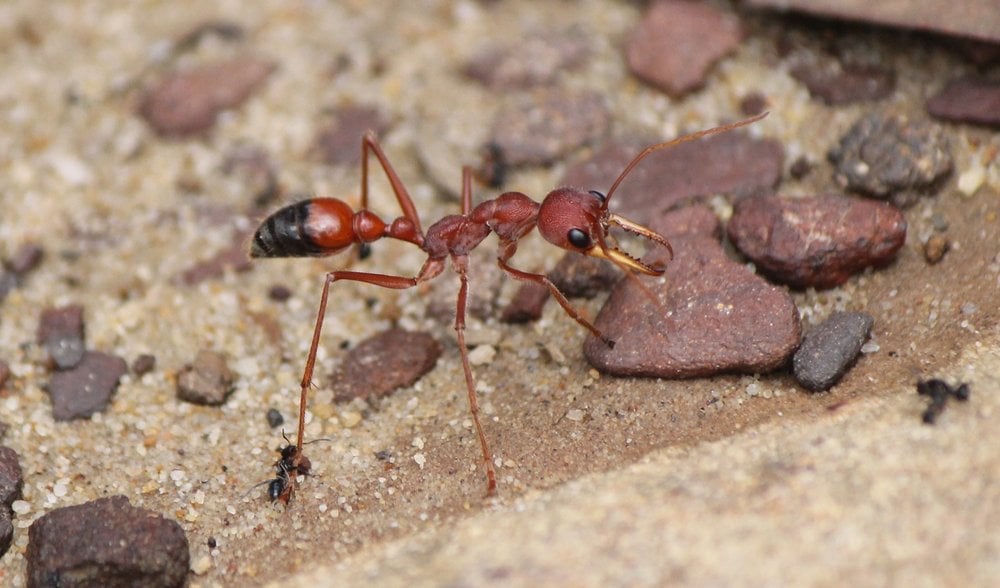 Image credit: Nicolas Jooris
Reading Time: 4 Minutes • Print this page
In an ant’s world, the smaller you are the harder it is to see obstacles.

LOOK AROUND YOUR home or garden, or while out for a walk in the bush, and you’ll soon find plenty of ants of all shapes and sizes making their way around the place.

But how do ants detect and detour around obstacles, especially when they are finding food alone and not in a trail?

Our recent study, published in the Journal of Experimental Biology, has an interesting answer to that.

Ants’ eyes are not like ours. Ants have compound eyes with many units, called ommatidia. Their eyes look like an array of LEDs you’d see in a traffic light (except in a dome shape).

Each ommatidium sees one point in space so the whole eye sees one image but different portions of it.

But ants cannot see the world at the same resolution as we do. Their world is blurrier than ours.

One way to know this is to count the number and diameter of facets (ommatidia) in their eyes. This is done by spreading a thin layer of transparent nail polish over a dead ant’s eye and peeling it off once it dries.

The replica of the eye can be flattened by making cuts at suitable places and taking a picture of it to count the facets and estimate their spatial acuity (the best resolution at which they can visually perceive something). Given their blurry vision, it is remarkable that ants can still carry out various tasks such as navigation in a complex terrain.

Imagine finding your way out of a thick jungle where everything looks blurry. And the bad news for ants is that the problem gets worse the smaller they get. When things get smaller

Ants vary dramatically in size. There are big ants, such as Australia’s Bull ants that can range from 8mm to 40mm, and then there are the tiny 1.5mm electric ants, which are currently an invasive problem in Queensland.

Fire ant species vary in size even within the same colony.

With the evolution of small body size, further reduction is not possible without affecting the normal functioning of the animal owing to design limitations. It’s a common phenomenon, called miniaturisation.

Miniature ants have smaller eyes and fewer ommatidia. This also means that they have blurrier vision (less spatial acuity) than bigger ants.

Yet all ants — big or small — face similar challenges when they are out looking for food and navigating back home. So does miniaturisation affect their visual navigation ability?

Ants encounter many obstacles when navigating. These obstacles can block the views that the ants may be using to find their way home.

So the ants need to be able to detect and detour around these obstacles. Doing so will also reduce the time each ant spends in the harsh environment outside the nest.

To test whether miniaturisation affects this ability, we kept an obstacle in the path of homing ants that were trained to a sugar solution feeder. These ants use visual cues for navigation rather than relying on chemical trails.

Obstacle avoidance in an ant.

We found that the smaller ants with fewer ommatidia in their eyes can only detour when they are much closer to the obstacle when compared to bigger ants with more ommatidia.

This suggests that ants with smaller eyes can detect objects only when they are closer to them.

So being miniature can affect certain visual navigation abilities. Still, the smaller ants did not collide with the obstacle. Graphical summary of the study showing the size variation in ants and how that affects their ability to detect obstacle from far. (Image Credit: Ravindra Palavalli-Nettimi)

Miniaturisation is quite common among insects, and the obstacle avoidance behaviour has implications on navigation for both walking insects such as ants, flying insects such as bees, even for collective food transport and animal cognition.

While our study highlights the evolutionary costs of being miniature, ants can be a inspiration for artificial vision technology such as the insect camera.

Knowing how ants can navigate using minimal visual information about their surroundings can help in designing efficient navigation technology. This may even help guide research in robotic vision.