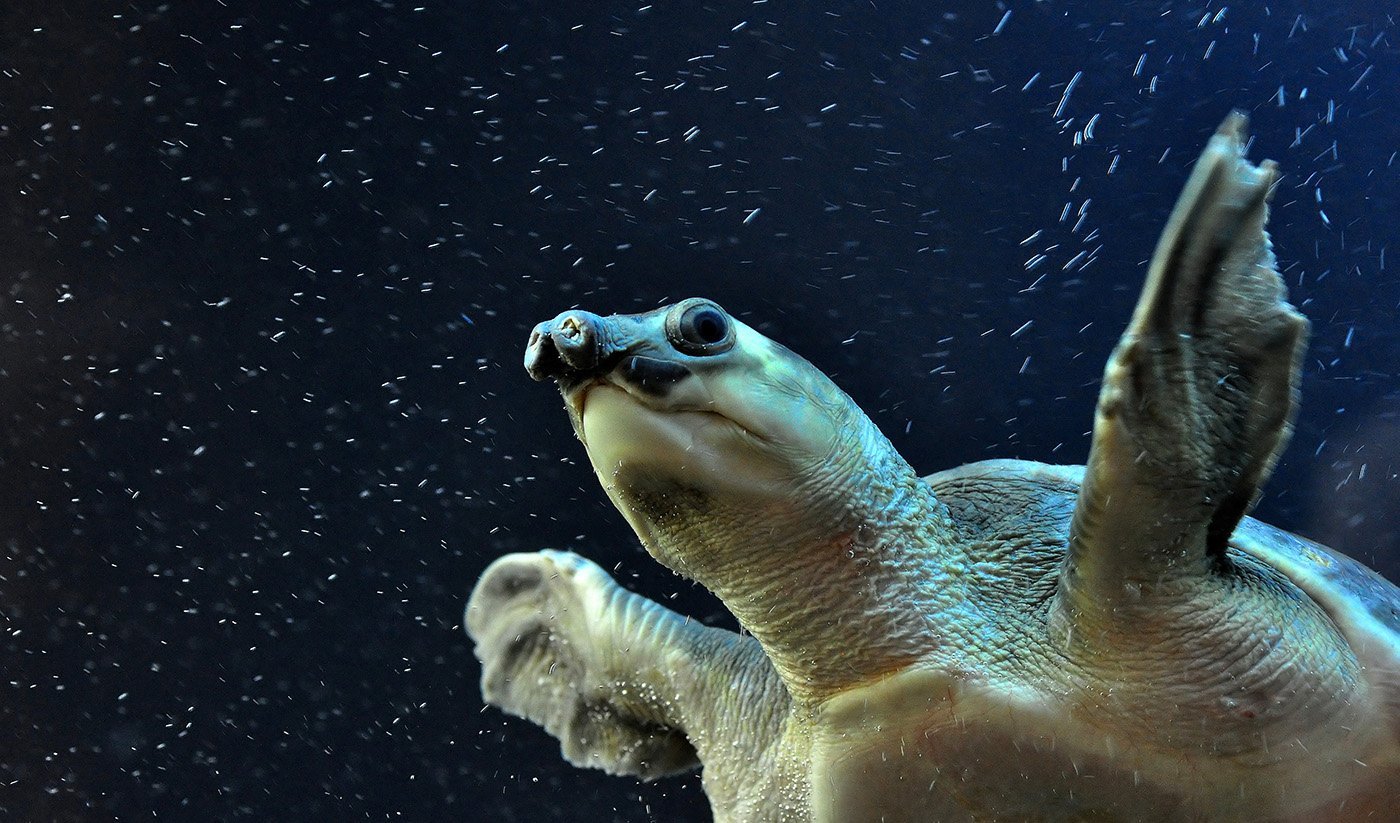 A pig-nosed turtle. Image credit: Nicholas Toh
Reading Time: 5 Minutes • Print this page
These ancient species have been evolving longer than most.

CHARLES DARWIN coined the term ‘living fossil’ in 1859, when writing in On the Origin of Species about platypuses and lungfish: “…these anomalous forms may almost be called living fossils; they have endured to the present day, from having inhabited a confined area, and from having thus been exposed to less severe competition.”

It was never meant to be a scientific concept, rather a poetic reflection on species with characteristics that first evolved long ago. But some scientists would rather abandon the term, arguing that it implies these flora and fauna have stopped evolving.

All species continue to evolve, even if their changes aren’t obvious to us. The ‘living fossils’ listed here are not perfect portals to prehistoric times. But they’ve survived mass extinctions, a devastating comet impact and multiple ice ages – while still appearing roughly the same as their ancestors did millions of years ago. Wollemia trees were known only from fossils – some dating back 200 million years – until 1994, when National Parks and Wildlife Services officer David Noble found unusual trees in a remote Wollemi National Park gorge, north-west of Sydney. They matched fossil Wollemia, making them living relics from the age of dinosaurs. The location of the critically endangered wild population is kept secret for the species’ protection, but cultivated trees are now available commercially. Lungfish date back at least 380 million years and fossils indicate the Queensland variety has changed little for 100 million years. These long-bodied, olive-brown fish with paddle-like tails are native to south-east Queensland’s Mary and Burnett river systems, but have been introduced elsewhere. While most fish breathe solely through gills, lungfish are equipped also with a lung for breathing air at the water’s surface.

Hagfish are ocean-dwellers and this, the only species that inhabits Australian waters, is found off the east coast. Like other hagfish, it exudes copious slime from its skin that clogs the gills of predators, allowing it to escape. Only one hagfish fossil has been unearthed, but it has a striking resemblance to modern hagfish. Today’s fish have retained many characteristics from 300 million years ago. When cattle grazing around Cairns in 1970 suddenly died, scientists found they’d eaten
a poisonous fruit. The rainforest tree from which it had come turned out to be the sole survivor of a group dating back 120 million years, when flowering plants first evolved. Also called ribbonwood, the idiot fruit tree’s ancient lineage earned it the nickname Green Dinosaur. It occurs in only a few lowland forest pockets, which might be explained by its toxicity. It’s thought the tree may rely on gravity (not animals) for seed dispersal.

Tasmania is a conifer hotspot and an important refuge for Gondwanan relics such as the creeping strawberry pine, an unassuming shrub named for its bright red edible fruit. Fossil pollen grains dating back 150 million years and 20-million-year-old fossilised leaves from New Zealand indicate that close relatives of this pine were once common throughout the Southern Hemisphere. Now the sole survivor of its family, it’s found only in the rugged mountains of Tasmania.

Tasmania’s Lake St Clair harbours another Gondwanan relic: the mountain shrimp. This crustacean is endemic to the island state, where it’s common in lakes and creeks 300m above sea level. Mountain shrimp resemble 250-million-year-old marine fossils. They had adapted to freshwater habitats by 220 million years ago – evident from NSW lake sediment fossils of shrimp that appear identical to their modern Tasmanian counterparts. In 2014 scientists analysed ghost shark DNA and discovered its genome has remained largely unchanged for 420 million years. A bizarre-looking species with a trunk-like snout that it uses to sweep the sea floor searching for shellfish, it currently holds the title of ‘slowest-evolving vertebrate’ that we know of. Despite its common name, this is not a true shark. It’s part of the chimaera family of cartilaginous fish, which diverged from sharks and rays 420 million years ago. Australia’s 74 velvet worm species come from an ancient lineage stretching back half a billion years. They are reclusive caterpillar-like creatures that waddle on stubby feet in moist forest undergrowth, trapping prey by expelling jets of sticky slime. Fossils are rare, but specimens have been found preserved in 40–30-million-year-old amber and 300-million-year-old sediments. Today’s velvet worms are strictly terrestrial, but a marine-dwelling relative with very similar morphology was unearthed in a 500 million-year-old deposit, dating to the era when the earliest animals began to colonise the land. Fossils of the pig-nosed turtle family Carettochelyidae dating back to the Eocene (56–33.9 million years ago) are distributed worldwide. Today, just one species remains and it’s found only in remote rivers of NT and New Guinea. This ancient, soft-shelled turtle is considered an evolutionary link between freshwater and marine turtles, because it inhabits rivers and yet sports paddle-shaped flippers more fitting to its sea-dwelling cousins. No Aussie living fossil list would be complete without stromatolites: unremarkable stony clumps that disguise a remarkable history. Composed of layered mats of cyanobacteria, stromatolites are among the oldest living things known, with a fossil record linked to the dawn of life 3.7 billion years ago. They were only known from ancient fossils until living colonies were discovered at WA’s Shark Bay in 1961. Stromatolites were hugely significant in life’s evolution on Earth. The tiny photosynthetic bacteria that make up these structures pumped out so much oxygen they altered Earth’s atmosphere, paving the way for more complex life forms.