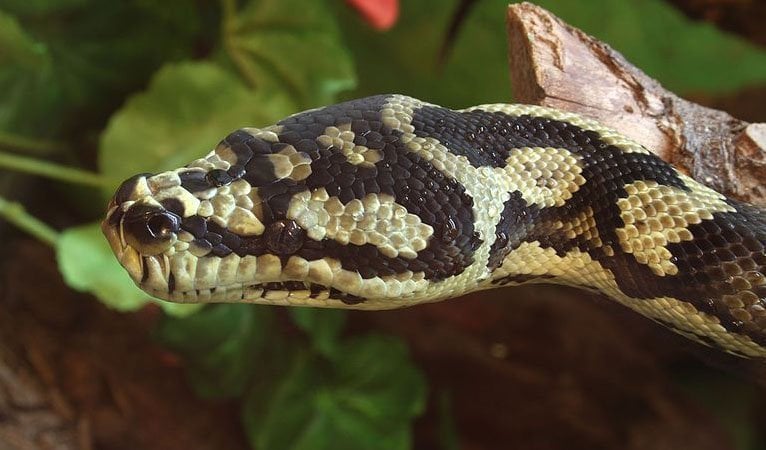 Image credit: H. Krisp/Wikimedia
Reading Time: 3 Minutes • Print this page
Australia is renowned for its marsupials, parrots and eucalypts, but how about its pythons? With 14 species, Australia has close to half the world’s total of 31.

CELEBRATED AS THE land of parrots, Australia is more obviously a paradise for pythons, with a far larger share of the global total. South America outdoes Australia for parrots, but no continent comes close for pythons.

My city of Brisbane abounds in carpet pythons (Morelia spilota). They live all through the suburbs, and even in parks in the city centre. One was filmed swallowing a possum in the Southbank gardens, a short walk from the Queensland Performing Arts Centre.

Brisbane has so much greenery that pythons can operate mostly unseen, sliding from tree to tree in search of ringtail possums. Some years ago a possum built her nest in dense foliage outside my kitchen, but a python found her – I saw the bulge and the empty nest. One night last year the crash of my alarm clock on the floor woke me to a hefty python climbing on to my bedside dresser right in front my face. It must have smelt me with its forked tongue but didn’t seem to care. In the northern half of Australia professional snake-catchers are called to homes to remove vast numbers of pythons. In Cairns, four scrub pythons (Simalia kinghorni) were removed from a single roof, including one more than four metres long. In inner city Darwin a 2.8 metre carpet python was removed from a veranda. Though neither poisonous nor aggressive, pythons do occasionally swallow cats, and if annoyed they have lots of long teeth to bite with – including four rows on top for a firm grip on prey. The one time I was bitten by a python I was handling it didn’t really hurt but did draw a dribble of blood.

See more: Everything you need to know about snakes

One theory about Australia is that the infertile soil favours large reptiles as predators. We have plenty of big lizards as well as big snakes. Because pythons don’t expend energy keeping themselves warm, they don’t need to eat often, so they can live in habitats where, because of infertility, prey is scarce. That doesn’t apply in leafy cities because there is heaps to eat, including rats, chickens and wild birds, and flying foxes. Possums achieve higher densities in lush suburbs than in bushland, and I suspect carpet pythons do too. But I am talking about the northern half of Australia. Sydney’s diamond pythons (Morelia spilota spilota) and Perth’s carpet pythons rarely visit gardens except near bushland, while residents in Melbourne, Adelaide and Hobart miss out entirely because cold winters don’t suit pythons.

With so much wildlife doing badly we should celebrate any success stories and urban pythons are one of those. They are the biggest wild animals in Australia’s city gardens. But spare a thought for Singapore, which leaves us far behind. Lurking in its drains and parks are reticulated pythons, the world’s longest snakes, sometimes more than ten metres long.