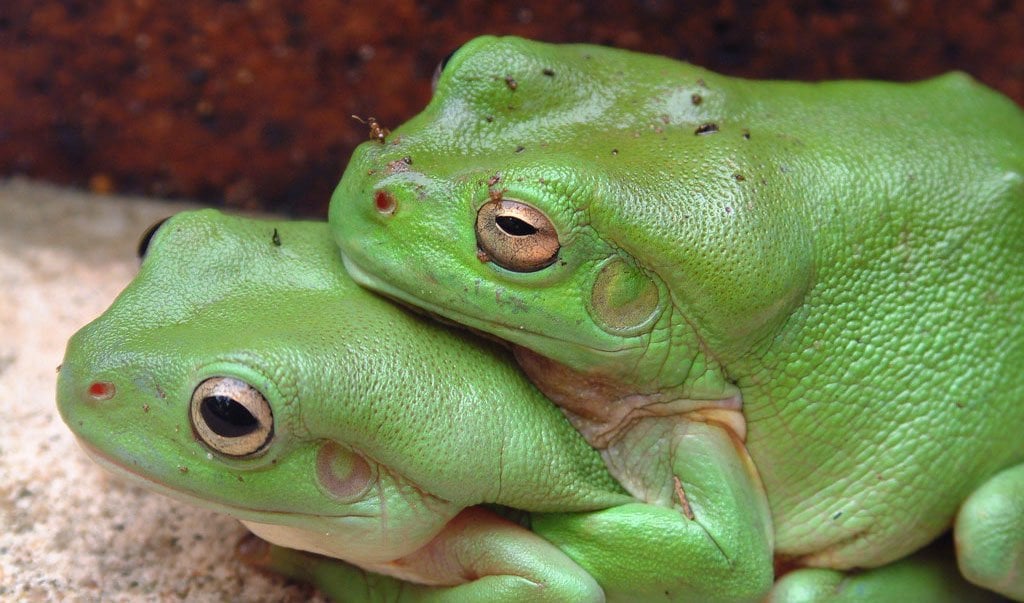 THERE’S A LOT we don’t understand about frog sex. But what we do know is that no one species approaches sex the same as another, making for an interesting array of bizarre froggy positions and loud, passionate mating calls.

Jodi Rowley, Australia’s pre-eminent frog expert from the Australian Museum, tells Australian Geographic that if you think all it takes is a simple “ribbit” and it’s on, you’d be mistaken.  Instead, she says lady frogs are “choosy.”

Attracting a female with a sweet voice

Like a peacock attracting a mate with a feather show, Jodi says that a male frogs’ very first attempt at mating is dependent on showcasing an enticing call.

“Around the world it tends to be a bit different. Sometimes females prefer the more complex calls, while others prefer the biggest, deepest call. The selection is all on the female,” she says, explaining that plenty of our native frog species’ common names are inspired by the calls they make. “In Western Australia we’ve got the motorbike frog, there’s the moaning frog, the plonking frog… it goes on. One of my favourites is the holy cross frog who loudly calls whoop-whoop.”

Suiting up for the occasion

According to Jodi, during the mating season many Australian frogs go from a boring brown colour to a fluorescent yellow, although scientists remain unsure of the reproductive purpose of this colour change.

“We don’t know whether it’s to attract females or to tell other males to go away, or a combination of the two,” Jodi says. “At the moment, Australia is just full of yellow frogs. The frogs are the brightest while they’re actually mating. It’s really cool.”

Jodi says that while some frog species are quite the exhibitionists, frogs typically use just one position to mate.

The position used by all Australian frogs is known as amplexus, which sees the male frog either grab the female from the armpits or around the waist.

“All Australian frogs have external fertilisation so it’s essentially about getting the sperm and the eggs in contact with each other,” Jodi says. And frogs can stay in this position for anything from a few hours to several months.

Occassionaly, Aussie frogs get a little more freaky, opting for more than one partner.

“Particularly in frogs that breed in a very short timeframe, multiple males can get a bit excited and try and mate with a single female and at other times they accidentally grab other males,” Jodi says.

“In other species, group mating is the norm, but we don’t know that much about why. It appears in some species that the offspring do better when the eggs are fertilised by multiple males.”

Once the male frog is comfortably in the amplexus position it’s up to the female to take him wherever she wants to lay her eggs.

“Some frogs aren’t that fussy and they’ll breed in ponds or springs,” Jodi explains. “Then there are others like the corroboree frogs that require quite specific soaks.”

Due to habitat modification and disturbance by feral animals and introduced fish, it’s become harder for many endangered species to breed.

Jodi says, however, that current research is helping scientists to better understand what these frogs really need to be able to mate in the wild successfully.

“Zoos allow us to see reproduction and investigate it close up. This helps when it comes to the crunch, like it has with the [critically endangered] corroboree frog because we’re able to provide better conditions in the field through the information we gain by watching them in captivity.”

Such information will also prove handy for those living in urban areas who would like to attract more frogs to their backyards.

In urban and suburban areas we tend to build the same kind of ponds in our backyards and it attracts the same species.

“By understanding the habitats different frogs like, such as bogs or tree frog apartments, you could be attracting a more diverse range of frogs,” Jodi says.