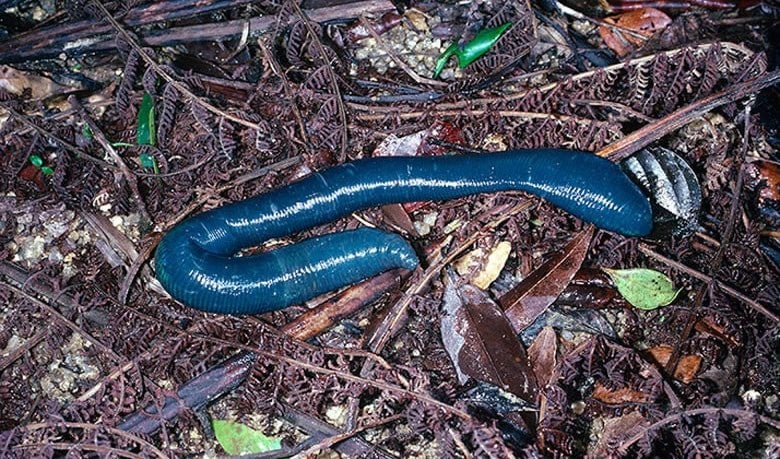 Reading Time: 3 Minutes • Print this page
You may never have heard of the Terriswalkeris terraereginae, a giant blue earthworm living deep in the moist soils of tropical north Queensland, but it’s the prettiest worm you’ll ever see.

THE Terriswalkeris terraereginae lacks a common name but usually just goes by ‘the big blue earthworm’, which describes its long, blue body that makes it look a lot like a gummy worm.

Geoff Dyne, the former Assistant Director of Queensland’s Natural Research Management Team, and an expert on Australian earthworms, has researched them for more than 40 years and first came across the big blue form while studying for his PhD in the 1980s.

“They’re quite stunning worms to see alive but you don’t see them very often because they’re fairly deep burrowers,” he says.

Most of Geoff’s interactions with the worm occurred around the Lamb Range, near Cairns, which is well removed from Mt Bellenden Ker, where the very first big blue earthworm specimen to be described was found in 1890.

“I just happened to be at the right place at the right time when there was earth cutting being done for a road,” Geoff recalls. “Usually, the only time to see them is after heavy rains or when earth-moving machinery is involved.”

Fortunately, most of the earthworm’s habitat lies either inside or close to the Wet Tropics World Heritage Area meaning its not under any immediate threat. However, sightings remain rare.

Its s bright colour, which Geoff says looks more Prussian blue up-close, and  length, which is substantial although it doesn’t grow quite as long as the giant Gippsland earthworm, makes it interesting.

Why are they blue?

According to Geoff, we still don’t know why these particular earthworms are blue.

“Often animals that are toxic or poisonous will have a bright colouration to indicate that they’re not for eating, he says, “but whether that’s the case, or if it’s just a genetic mutation that has stuck because there wasn’t strong selective pressure one way or another, we don’t know the answer.”

Because the earthworm is difficult to capture and isn’t easy to keep alive in a laboratory setting, discovering more about their unique physiology has proven almost impossible.

The big blue earthworm is rumoured to secrete a bioluminescent slime. However, Geoff says this is hearsay.

“There are reports that at night time, after rain when these worms are on the surface, you do see these bioluminescent trails but that’s an unconfirmed report.

“But it would be yet another pretty interesting characteristic,” he says, adding that bioluminescence in earthworms isn’t uncommon.

“Quite a few earthworms produce a bioluminescent slime from their body cavity, which leaks out through the dorsal pores. Again, we don’t really know why they’re bioluminescent.

“It’s an amazing mechanism but they have no visual organs so they can’t see the bioluminescence. It may just be a physiological accident.”

Despite being retired, Geoff still regularly receives emails from people about new species of earthworm or new insights on extraordinary species.

“There was one recently that comes from Broken Hill,” Geoff says. “You have to think ‘how could an earthworm possibly live out there?’ because it’s so dry. But they have mechanisms and they’ve obviously been around for a very, very long time.

“They’ve adapted as the climate has changed. Some of them burrow very deeply to get down into the water table or wrap themselves up in a ball of slime and wait out the dry season, like the ones that live in monsoonal Australia.”

Geoff adds that despite there being plenty to study when it comes to Australia’s earthworm species, of which he says there are thousands, research and funding tend to focus on more “iconic animals”.

“Getting kids excited about Australia’s hidden biodiversity is a good start. People spend a lot of money on iconic species. If they look good they attract more dollars.

“It’s why the government mostly puts money towards species that will get public attention. There are a lot of interesting things in the world but there are only so many people to study them… I think it’s time earthworms had a comeback.”