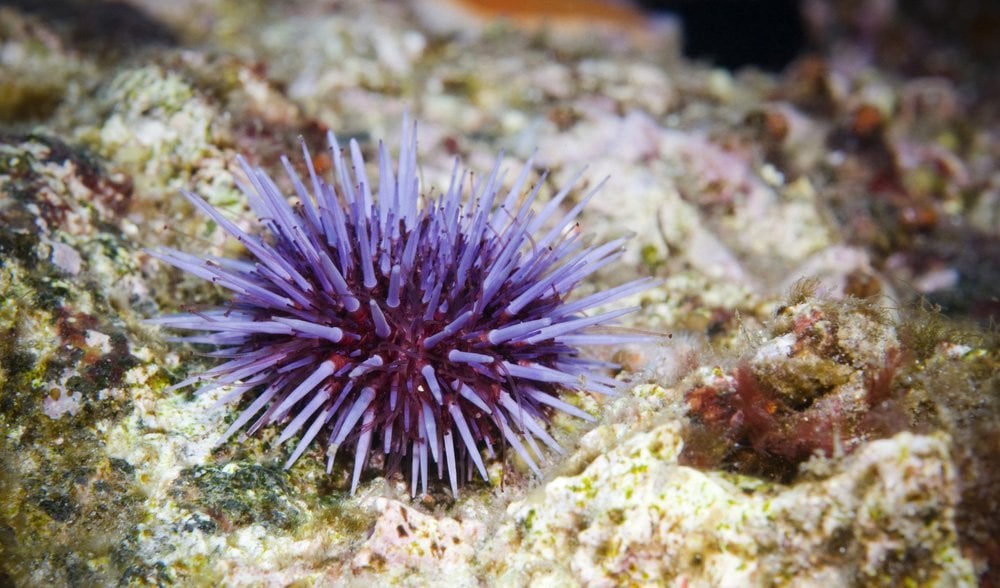 A purple sea urchin. Image credit: Natalie Jean/Shuttershock
Reading Time: 3 Minutes • Print this page
Have you ever gazed into a rock pool and wondered what lives inside? Well, these are the most common inhabitants.

LIFE’S TOUGH in the narrow coastal strip that spans the highest and lowest tides. The plants and animals living here must withstand the relentless pounding of waves as well as prolonged exposure to sun and wind. In summer, temperatures may vary by 20°C in the space of a few hours. But for all the difficulties of living in such a harsh and changeable habitat, there’s one important reward: they’re safely beyond the reach of voracious marine predators. These anemones creep towards food or mount an attack on an unrelated waratah anemone. Young emerge fully formed from an adult’s mouth. Sea urchins withstand strong currents and heavy surf by wedging themselves in rock crevices. Stout spines protect them from water loss and predators. This octopus’s bite can penetrate a wetsuit and inject enough poison to kill in minutes. When threatened, its electric-blue rings glow. This stubby-legged starfish comes in an impressive array ?, of colours and anchors itself to rocks using hundreds of water-filled tubes, similar to suction cups, on its undersid The “beads” of this seaweed contain water, to prevent desiccation, and gas, to help the plant float and obtain sunlight for photosynthesis. The dimples on the surface of the beads are the plant’s sex organs. These hardy molluscs congregate on rock shelves at densities of thousands per square metre. These hardy limpets hunker on rocks until they are covered by water when they feast on microalgae. Morula marginalba This common mollusc bores holes through the shells of mussels, oysters and limpets and then uses its sharp tongue, called a radula, to cut up the animal and suck out the pieces. These little nippers scuttle across rocks and into crevices in search of shelter or a meal of molluscs, algae, fish and sea urchins.

Size: 8 cm across the carapace