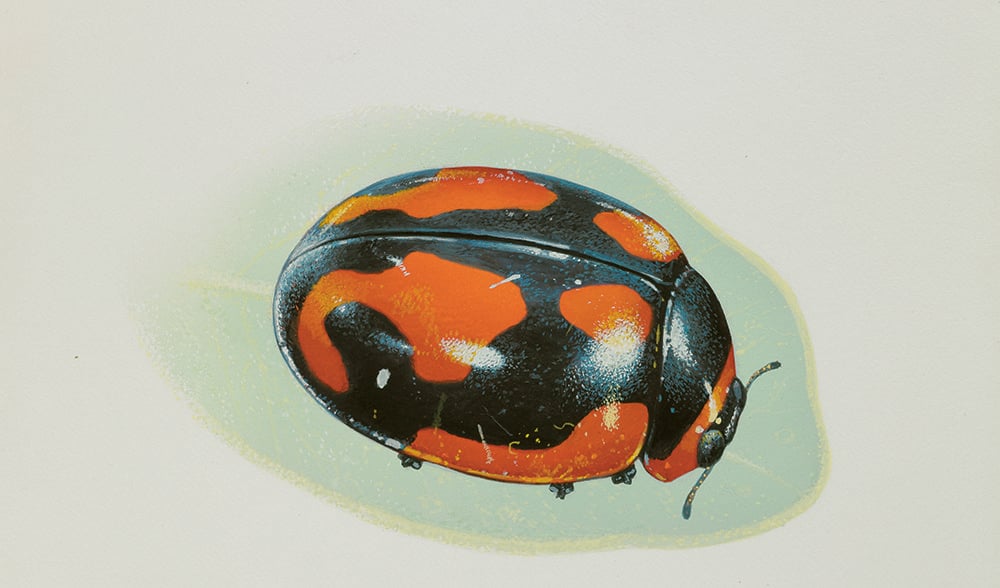 THE RICHLY VARIED patterns and colours of ladybirds are truly captivating, but it’s their voracious appetites that underscore their popularity with gardeners and farmers.

Australia hosts more than 500 ladybird species, most of which are predators of aphids and scales — insect pests that feed on plant sap and cause serious damage to gardens and crops when they occur in large numbers.

In 1888, the Australian native vedalia ladybird became the world’s first biocontrol agent when it was exported to California to rid citrus orchards of cottony-cushion scale. The mealybug ladybird followed in 1891 and successfully controlled California’s citrus mealy bug.

Today ladybirds such as the transverse, maculate and minute two-spotted species control aphid populations, and thus increase yields in the Australian cotton industry, one of our highest rural export earners. Ladybirds are rarely preyed upon: they taste terrible. They further repel predators by emitting a noxious liquid from their leg joints when threatened.

This herbivorous ladybird is a pest on crops such as potato, pumpkin and tomato. Its elytra (forewings) have black spots – 28 in total -and are covered in dense short hairs.

Found: All States and territories except SA, Victoria and Tasmania Mealybug ladybird larvae and adults feed on the eggs and nymphs of common insect pests such as mealy bugs. Larvae are covered by whitish waxy secretions and resemble mealy bugs, but are about twice the size of the adult female citrus mealy bug.

Found: All States and territories except Tasmania Previously believed to be restricted to Europe, Russia and China but now widely distributed in Africa, North America and elsewhere. Discovered in the Lockyer Valley, Queensland, in November 2000. Eats up to 50 aphids a day.

Found: All States and territories The first biocontrol agent ever used, the vedalia was shipped to the USA in 1888 to control cottony-cushion scale insects in California citrus orchards.

Found: All States and territories except NT and Victoria

Food: A few species of the genus lcerya This is one of the most commonly encountered ladybirds in the gardens and parks of Australian cities.

Found: All States and territories in urban areas, forest, heath and woodland

Little is known of the biology of A. burgeoisi, Australia’s largest ladybird. Larvae are creamy white with lines of black dots on their backs and grow up to 8-10 mm.

Found: All States and territories except WA and Tasmania