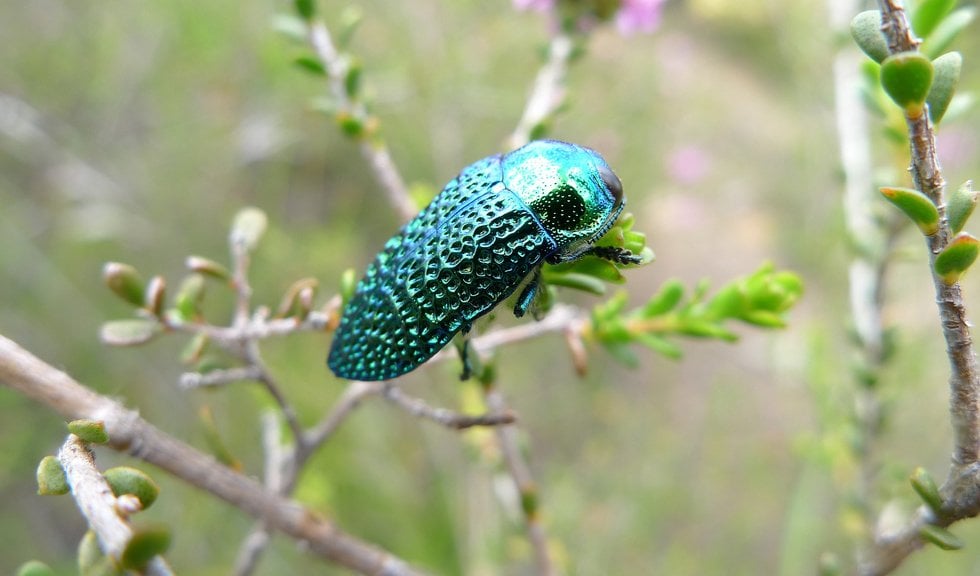 THE COMMON NAME of these beetles stems from the gem-like quality of their hard external skeletons. Not only is this brilliantly coloured in many species, but it’s also textured in a way that can produce a metallic sheen and the multifaceted appearance of cut precious stones.

Jewel beetles can be found in all Australian terrestrial habitats — from lowland rainforests to high alps, from the lush vegetation fringing rivers to the gnarled scrub lining the edges of dry, sun-baked inland lakebeds.

The popularity of jewel beetles among insect collectors is outshone only by tropical butterflies. In fact, their appeal led to their exportation from Australia in such large numbers that in 1978 jewel beetles were listed for protection under the WA Wildlife Conservation Act — a first for invertebrates in Australia.

Most adult Australian jewel beetles are nectar feeders but some survive exclusively on foliage. The larvae are usually woodborers, typically feeding on sapwood just under the bark.

Members of the genus Stigmodera have such gem-like qualities that they were once widely used for brooches and ornaments. Seven Australian species belong to the genus but the hard shell and ever-lasting lustre of the WA native, illustrated here, were particularly valued by jewellers. Its delicately sculpted carapace with patches of bronze sheen has the appearance of a multifaceted precious gem. All regions of Australia — except the NT — have Temognatha species. This one is wholly restricted to WA where it depends on wood-lands of she-oak growing in association with summer-flowering mallee. She-oak is the larval plant and mallees are the essential food source of the adults. Females lay their eggs on she-oak roots. Calodema is a strikingly coloured, mainly tropical genus. Most species occur in New Guinea with just three found in Australia, including this one, which has a distribution extending from Cape York Peninsula to south-eastern NSW. Like most Australian jewel beetles, C. plebeium prefers feeding on the nectar of eucalypts and their relatives. Longitudinally striped with a metallic appearance, Cyphogastra jewel beetles are strictly tropical. The larvae are wood-borers but adults feed on the leaves of figs and other species. Three Australian species are found from north-eastern Queensland to the Kimberley, in WA. Many more species are known from Indonesia and Malaysia. Melobasis is a predominantly Australian genus of about 120 relatively small but exquisite species — 100 of which are found only in Australia, the rest in Indonesia and the Pacific Islands. Most of the Australian species feed on native wattle and peas. Australia’s two largest jewel beetle species belong to this genus, and the females of both are noticeably bigger and, inexplicably, rarer than the males. Males have been observed trying to mate with discarded ‘stubby’ beer bottles —the glass colour and pattern of which resemble the larger Judimorpha females. They are restricted to arid and semi-arid habitats. Many of the 85 Australian jewel beetle species currently in the genus Temognatha are conspicuous insects because of their large size and eye-catching colours and patterns. T. pictipes is confined to the transitional woodlands of WA where the larvae feed on mallee roots and the adults on mallee flowers. With more than 450 species, Castiarina is Australia’s largest jewel beetle genus. They are small- to medium-sized beetles and are found in all States and many islands and are often seen in large numbers on flowering bushes. The distribution of C. castelnaudi — which feeds on bottlebrush and similar flowers — spans Victoria, SA and WA.