The bilby is becoming Australia’s Easter icon and a symbol of hope for our native wildlife.
By Gemma Conroy • April 13, 2017 • Reading Time: 6 Minutes 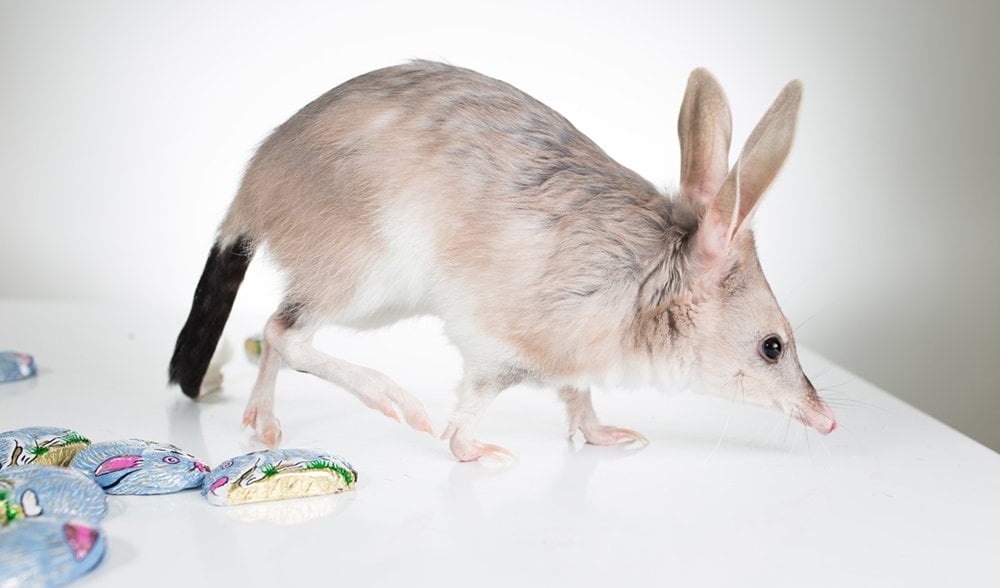 Our endangered bilby is becoming an Aussie Easter icon. Image credit: courtesy Save the Bilby Fund

JUST AS IN OTHER parts of the world at Easter, Australians spend the long weekend eating (often far too many) chocolate bunnies and eggs. But there’s another animal that has found its way into our national Easter celebrations – the threatened Greater bilby (Macrotis lagotis).

Once widespread across Australia, the bilby has become a rare sight, largely due to predation by feral cats and foxes, plus the invasion of rabbits. Their struggle for survival sparked the rise of chocolate bilbies in place of bunnies at Easter. While the Easter Bilby is growing in popularity, chocolate rabbits still dominate store shelves.

“The ‘bilbies not bunnies’ campaign makes people stop and think about the threats to our native fauna, not just the bilby,” says Kev Bradley, CEO of Save the Bilby Fund.

“We want to see the campaign grow each year so everyone’s local store gives them the option to choose a bilby over a bunny,” he said.

So, before you eat another chocolate bunny, here are some reasons to celebrate the bilby at Easter time instead of a devastating pest. There’s nothing quite like the Greater bilby, a nocturnal marsupial with silky blue-grey fur. With rabbit-like ears, a long tufted tail and legs similar to a kangaroo’s, bilbies are an intriguing mix of unusual adaptations. When their ears aren’t detecting insects underground, they help keep the bilby cool by releasing heat, much like a car radiator. Instead of spending their days searching for a creek or waterhole, they skip drinking water getting their moisture from the insects, bulbs and fruit they eat. While their legs resemble a kangaroo’s, they don’t hop around like one. When a bilby needs to move fast, it gallops like a horse.

2. They are ecosystem engineers While rabbits are busy eroding the landscape with their digging, bilbies are constructing spiral-shaped burrows that help keep the ecosystem in balance. In addition to providing shelter, these three metre long diggings act as compost pits filled with decomposing plant material and germinating seeds. With every digging, bilbies help to regenerate native plants and restore the soil in the harsh Australian desert.

3. Australia has been their home for millions of years According to fossil evidence, bilbies have been galloping around mainland Australia for roughly 15 million years. Although they are shy and mellow creatures these days, the ancestor they broke away from 20 million years ago was anything but. The carnivorous bandicoot Galadi speciosus was a powerfully built predator with muscular jaws and flesh-shredding teeth. While today’s bilbies have retained the long teeth and bandicoot muzzle of their ancient relative, these physical features now help them dig holes to find food.

4. They are not as common as they used to be If you were living in Australia a hundred years ago, you would likely spend a lot of time complaining about bilbies digging up your vegetable garden. This is because bilbies were extremely common and could be found in 70 per cent of mainland Australia. But shortly after the arrival of European settlers, the bilby’s range rapidly shrunk to covering just 20 per cent of the country. Now, it is estimated that there are less than 10,000 bilbies scattered in pockets of the Northern Territory, Western Australia and Queensland.

5. Bilbies are the last of their kind When the early settlers were fresh off the boat 200 years ago, there were two living species of bilby – the Greater bilby we know today and the Lesser bilby (Macrotis leucura). Sadly, the Lesser bilby hasn’t been seen alive for many decades and is thought to be extinct. Their disappearance was likely due to competition with rabbits, habitat changes and introduced predators likes foxes and cats. Now, only the Greater bilby remains and is nationally classified as vulnerable. Rabbits are cute, fluffy and out of control. Originally brought with the First Fleet for food and leisurely hunting, no one predicted that their numbers would reach the millions, becoming the main cause of species loss in Australia. Things were somewhat under control until early settler Thomas Austin released 24 rabbits into the wild on Christmas Day in 1859, stating that, “The introduction of a few rabbits could do little harm and might provide a touch of home, in addition to a spot of hunting.” Since those 24 rabbits hopped onto Australian soil, they have wreaked havoc on our fragile ecosystems, from wiping out native plant species to eroding the landscape. Although they are popular as pets, Australia’s relationship with the rabbit continues to be an ongoing battle. Over the last 100 years, we have built giant fences, blown up their burrows and introduced infectious diseases like rabbit haemorrhagic disease (RHD) to try and protect our native wildlife. Although these measures have significantly reduced rabbit numbers, they are still regarded as the most destructive pest animal in Australia and a huge threat to native species. Even a single rabbit grazing on one hectare of land can hinder the regeneration of native plants. In 1968, nine-year-old Rose-Marie Dusting wrote a story called “Billy the Easter Bilby”. When Rose was 20, she published her Easter tale as a book, which went on to spark the public’s interest in saving the bilby. Then in 1991, the Foundation for Rabbit-Free Australia (FDA) set out to replace the Easter Bunny with the bilby to raise awareness of Australia’s struggling native wildlife.

Since then a range of chocolate manufacturers have jumped on board and have been producing chocolate bilbies instead of bunnies. A portion of each sale gets donated to bilby conservation projects and organisations.

9. Bilbies are making a comeback Money raised by chocolate bilby sales at Easter is helping conserve the species. (Image: Save the Bilby Fund)

The funds raised through chocolate Easter bilby sales over the past 25 years has helped brighten the future of their real-life versions. They have provided a boost to a number of bilby conservation projects, from captive breeding programs to building large reserves free from rabbits, cats and foxes. While the bilby still has a long way to go, numbers are slowly increasing thanks to these reserved areas. In South Australia, where they were once extinct, it is estimated that 800 to 1500 bilbies are digging burrows and galloping around a large reserve built by the Arid Recovery Plan.

10. They are a symbol of hope for our native wildlife The growing popularity of the Easter Bilby isn’t just raising awareness of the bilby’s struggle for survival. It also represents the plight of many of our native animals in the face of introduced species. Adopting the Bilby as Australia’s official Easter animal will spark public interest in native wildlife conservation and help keep conservation efforts moving forward.

See more
The head-stacking caterpillar wears its old heads as a hat
Orchid mantis babies are strange little aliens
An intimate look at the challenges of caring for wildlife amid a pandemic
It’s official: Australia is home to a fly named after Deadpool
The mystery of the Top End’s vanishing wildlife
The golden fruit dove looks like it belongs in a fairy tale
‘Switch off that porch light’: study reveals light pollution in cities has urban birds tossing and turning
Rare baby sunfish reveal early life of one of the ocean’s weirdest fish
Meet Moss, the detection dog helping Tassie devils find love
Meet the the ‘savanna glider’: Scientists have discovered sugar glider is actually three species
See a python swallow an Australian freshwater crocodile whole
The mystery of the mouse that died of smoke inhalation, but went nowhere near a fire
Scientists fight to save a glittering green bee after the summer fires
‘Keep at it’: Increase in birdwatching during lockdown assists with conservation efforts
This scientist wants you to sunbathe in a storm water channel