The low-down on common bluebottles 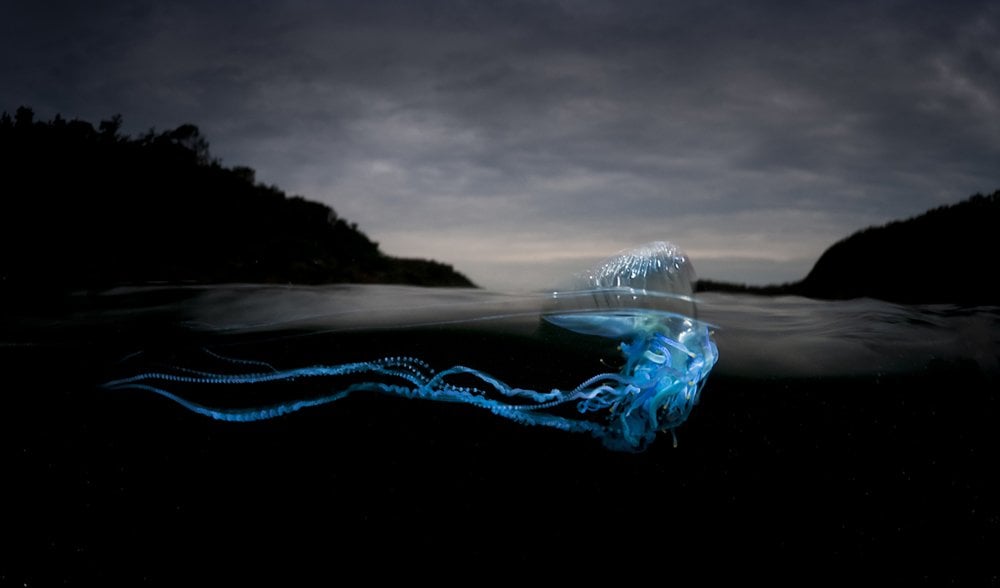 The common bluebottle found in Australia is the <em>Physalia utriculus</em>. Image credit: Matty Smith
Reading Time: 3 Minutes • Print this page
From where they live and what they eat, to how to treat a sting – everything you need to know about these most unwelcome summer visitors at the beach.

IT’S THAT TIME of the year again when the pretty but painful bluebottle washes onto beaches around Australia. If you’re one of the millions of Australians who live on the coast, it’s highly likely you’ve been stung at least once. But aside from learning quickly to steer clear of this infamous hermaphrodite, many of us know little about them, including how to correctly treat a sting.

So what do we know about bluebottles?

Although bluebottles appear to be single animals they’re actually colonial organisms known as siphonophores. Within the colony, specialised polyps make up the float, tentacles, digestive system and gonozooids (for reproduction). In some ways a bluebottle is an individual as well as a colony, explains Lisa-ann.

“They have repetitive parts that function separately, like a colony, but they cannot survive alone, like an individual,” she says.

We also know that the float, or sac, supports the colony and can grow up to 15cm. These floats have the fascinating feature of leaning to the left or right – a design believed to be the marine stinger’s way of ensuring that only part of a population is blown into shore and stranded during certain wind conditions. “If you look at bluebottles from the top, you’ll see that some have the colony – the blue fringy bits – to the right, while others go to the left,” says Lisa-ann. “I think it’s one of the coolest things about them.”

A group of bluebottles is called an ‘armada’, which is the Portuguese and Spanish word for a naval fleet.

How and what do they eat?

Bluebottles are active fishers, dragging their tentacles through the water in search of prey. They catch, sting and kill fish and other small marine life, and then the main fishing tentacle contracts the prey towards the mouths (yes, plural) of the bluebottle.

“The tentacles are armed with batteries of powerful stinging cells called nematocysts, which inject potent venom into prey, immobilising it more or less immediately,” says Lisa-ann.

“To us, it hurts, but to a fish the violence of being impaled by thousands of tiny harpoons and immobilised with a cocktail of muscle toxins and neurotoxins can be powerfully destructive.”

Where do they live?

Armadas of bluebottles travel the ocean’s surface at the mercy of wind. As a result, we see several species in Australian waters. The dominant species, however, is Physalia utriculus, which has a half-crested float and a single main fishing tentacle. They are most prevalent in sub-tropical regions, but will sometimes turn up in large numbers in North Queensland. Generally, though, large armadas can be found along beaches on the Gold Coast, around Sydney and Perth, and across Tasmania, says Lisa-ann.

If you get stung

There are two types of bluebottle stings. The sting from the Physalia utriculus is fairly uneventful, says Lisa-ann, and the pain generally fades within 30 minutes. The larger species in Australia (which is yet to be named and classified) has multiple main tentacles and causes Irukandji syndrome.

“This second one is much rarer, and is only reported every few decades,” Lisa-ann says.

If you’re unfortunate enough to get stung, Surf Life Saving Australia has this advice: