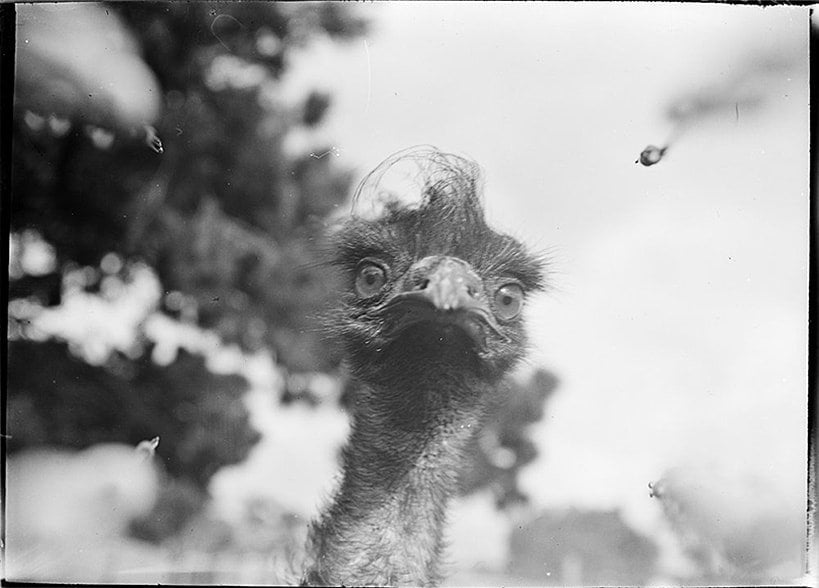 A bolshie emu stares down a photographer sometime between 1935 and 1937. Image credit: State Library of Victoria/Roy Dunstan
Reading Time: 2 Minutes • Print this page
In 1932 Australian troops were dumbfounded when they found themselves outmaneuvered by clever birds during the Emu Wars.

EARLY ON THE morning of 2 November 1932, the Seventh Heavy Battery of the Royal Australian Artillery alighted at Campion, WA, on to a hot red-dirt landscape about halfway between Perth and Kalgoorlie. There they unpacked two Lewis automatic machine guns and 10,000 rounds of ammunition.

The unit’s intention? To open hostilities with the emus of Western Australia that were moving in from central Australia in search of water and, having stumbled on the region’s delicious wheat districts, had begun to ravage crops.

No sooner had the unit arrived than a flock of 50 emus was sighted. The company’s commander, Major G.P.W. Meredith, immediately ordered his troops to circle the birds and chase them into range of the guns. By the day’s end only a dozen birds out of the thousands the men had shot at were dead. Nevertheless, first blood had been drawn in Australia’s ‘Emu Wars’.

Australian farmers and the Emu Wars

It all came about late in 1932, after a marauding emu population of at least 20,000 had been devastating farms across WA for some time. The farmers under attack (many of them ex-soldiers themselves) had eventually petitioned for military aid from the Minister of Defence George Pearce. He deployed troops swiftly, and they arrived with hopes of quick victory and a few emu feathers for their hats.

No sooner had the conflict begun, however, than it became clear that the Australian military had vastly underestimated the emu. Cunning adversaries, the emus proved almost impossible to hit with machine-gun fire, and they seemed able to shrug off even serious injury from bullets without breaking stride.

“If we had a military division with the bullet-carrying capacity of these birds it would face any army in the world… They can face machine guns with the invulnerability of tanks.”

A few days into operations, a planned ambush by a dam failed miserably when one of the Lewis guns jammed. A later attempt to mount a machine-gun on a truck fell apart when it was made apparent that the vehicle could not keep up with the birds.

Within a week of first contact the troops were recalled. Roughly 2500 rounds had been fired and killed somewhere between 50 and 200 emus. Meredith did note that his men had suffered no casualties. When the question was raised if a medal would be struck for the conflict, federal labor parliamentarian A.E. Green replied that any medals should go to the emus who had ‘won every round so far’. For his involvement in the deployment, Defence Minister George Pearce earned the unofficial title ‘Minister for the Emu War’.

Although a second (slightly) more successful military operation was mounted against the emus only a few days after the initial retreat in November 1932, in the end it was the instituting of a bounty on emus that proved most effective. Between 1945 and 1960 around 284,700 emus were killed in WA.

Australia’s emu population, however, remains stable to this day. Thankfully, they do not seem interested in resuming hostilities with the Australian government.