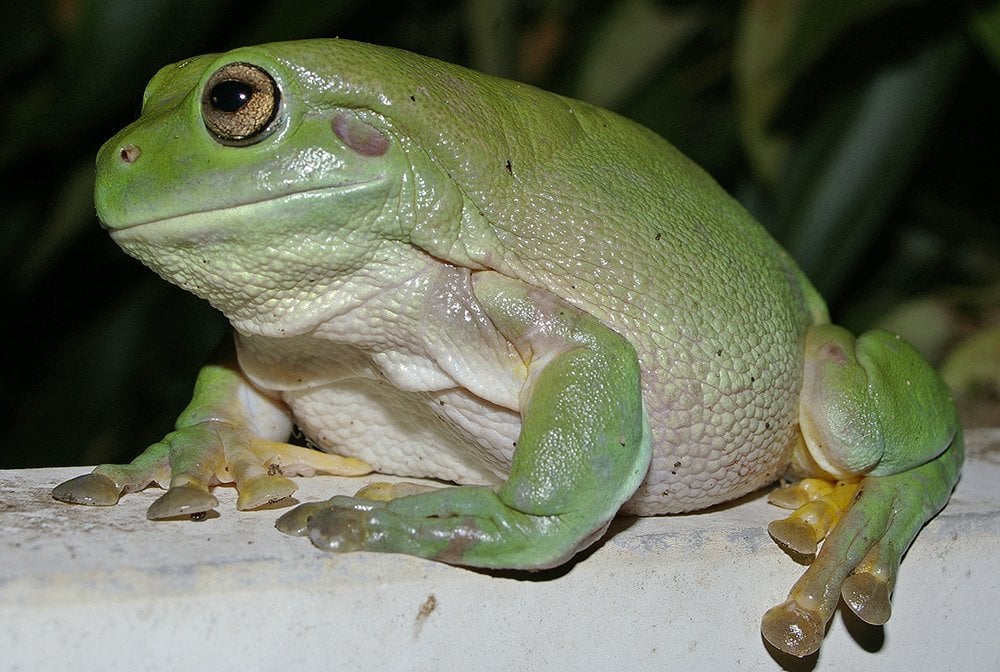 Australia's green tree frog (<em>Litoria caerulea</em>) is plump-looking with a smiley face and emits a peanut butter odour. Image credit: Bidgee / Wikimedia
Reading Time: 2 Minutes • Print this page
Also known as the smiley tree frog or simply the Australian green tree frog, there are many reasons to love them.

ONE OF AUSTRALIA’S more popular exports happens to be a frog. Our green tree frog (Litoria caerulea) rates highly as a pet in Europe and North America because it ticks so many boxes: it is hardy and long-lived, docile, easy to care for, large and colourful, and has a smiley face that makes it look happy.

Outside Australia it is widely called White’s tree frog, honouring John White, the First Fleet surgeon who named the species. Another name is dumpy tree frog, because it is plumper-looking than most frogs and becomes obese when fed freely. Smiling tree frog is yet another name.

Websites laud it as ideal for the first-time frog owner, with comments such as “Dumpys are calm and gregarious,” and “You’ll get hours of entertainment from their antics and friendly temperament”. They live up to 20 years and can be fed almost anything alive, including baby mice (“pinkies”). There are expensive blue-skinned and blue-eyed breeds for the dumpy aficionado. Their one drawback is a temperament so placid that some pet owners find them boring. They don’t do much except eat. The green tree frog has a placid temperament. (Image: LiquidGhoul/Wikimedia)

Toxins explain why this frog will rest for ages on a stranger’s hand. When seriously annoyed it produces from the skin a milky secretion known to kill blowflies. It emits a peanut butter odour as well, and anyone who inhales deeply near a distressed tree frog will suffer nausea and headaches. This frog is relaxed because it has toxins to protect it from enemies rather than needing to suddenly flee. Some butterflies are like this. With caterpillars that imbibe toxins from plants, glasswings and common crows do not struggle and risk damaging themselves when they are caught, because any predator that mouths them quickly lets go.

The green tree frog is the second most widespread frog in Australia, and that fits with its value as a pet. It is hardy enough to survive in the outback, which means it can endure hardships in captivity such as times without water.

These frogs are bred overseas rather than leaving Australia as regular exports. They escape at times from breeding facilities in Florida, but have not (yet) been found breeding in the wild.

Australia has provided the world with a remarkable range of pets, including budgerigars, cockatiels and other parrots, various finches, bearded dragons, bluetongue lizards and even the spiny leaf insect (Extatosoma tiaratum).