Home Topics Wildlife Why do whales strand themselves?

Why do whales strand themselves?

Australia is a global hotspot for mass whale strandings. The causes of these events are many, varied and often mysterious.
By John Pickrell • May 10, 2016 • Reading Time: 3 Minutes • Print this page 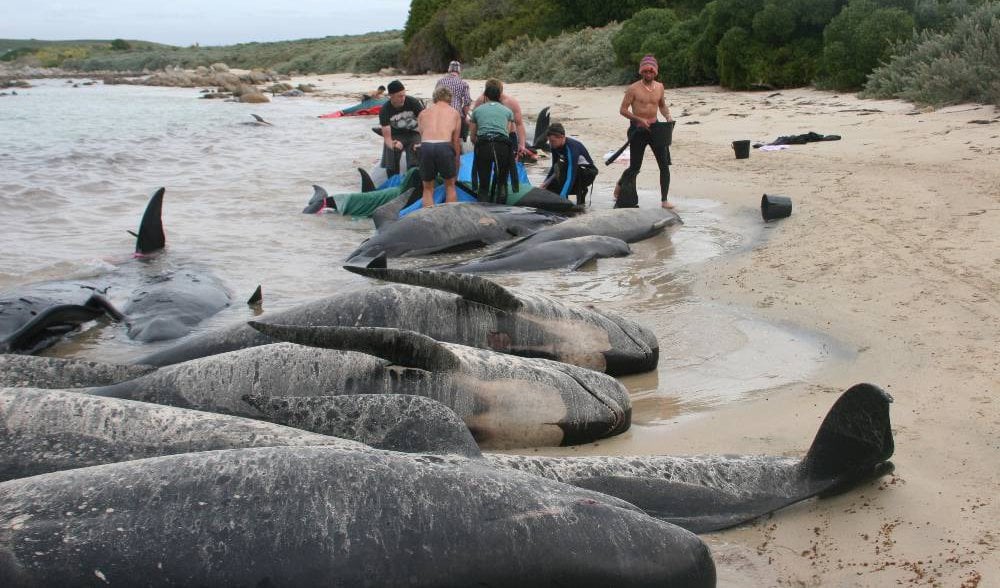 AUSTRALIA HAS A long history of whale strandings. They often occur (or are noticed more) in summer months and are most common in Tasmania, but they occur with some regularity all around our southern coastline.

On a global scale, Australia and New Zealand are hotspots for mass strandings. Within Tasmania, Circular Head and Macquarie Harbour/Ocean Beach are areas where they frequently occur, and this may be related to coastal topography. Strandings can also occur singly, and in these cases the animal is often sick or dying.

Recent mass strandings include: 29 pilot whales that died at New Zealand’s Stewart Island in November 2015; 18 that were stranded (and 12 that died) at Bunbury in Western Australia in March 2015; and seven sperm whales that died on South Australia’s Yorke Peninsula in December 2014.

Other strandings have been even more dramatic – 38 dolphins and 44 pilot whales were beached at New Year Island, north-west of Tasmania, in 2012; while another incident in 2009 saw 177 animals stranded on nearby King Island.

But why do mass strandings occur?

There are many reasons and little clarity as to the major culprit, but there are some patterns. The kind of whales that beach en masse are more likely to be open-ocean species that don’t spend a lot of time in the shallows (though this is not an absolute rule), and are those that live in close-knit social groups. Whales that strand are often toothed species – such as sperm whales, common dolphins, and pilot whales – not filter-feeding baleen whales. More than 3500 long-finned pilot whales have been stranded in Tasmania since records were first kept.

Sometimes strandings are down to navigational errors. Research from the University of Tasmania and the University of WA shows that the flow of cold, food-rich ocean currents close to shore, and places that have wide, gently sloping coastlines, can lead to confusion, which results in disaster. Strandings at Tasmania’s 33km Ocean Beach are thought to be down to such topography. Ear infections, which limit the use of echolocation, have also been implicated – and if one pod member becomes stranded, its distress calls can lead other members of the group to follow, with often fatal consequences.

In some cases, sickness from toxic algal blooms, viruses and other agents have been implicated. In that situation, the animals may simply have been too sick to swim anymore.

There’s also evidence that shipping noises and military sonar frighten or distress whales, causing internal haemorrhaging or decompression sickness as they flee towards the surface. There’s little doubt sonar is responsible on some occasions, but since mass strandings were written about by Ancient Greek philosopher Aristotle in 350 BC, it’s clearly not the only explanation.

Perhaps the oddest theory is that whales intentionally beach themselves in mass suicides – mooted in situations where casualties appear otherwise healthy – but there is little evidence to confirm this seemingly far-fetched idea.

Processes for helping stranded whales have been improved in recent years, meaning smaller whales can be refloated if rescuers act swiftly, and act carefully to minimise chances of them stranding again. Larger sperm whales, which can reach 18m in length, are much more difficult to refloat and often have internal injuries caused by the pressure of gravity on internal organs, meaning they can’t be saved.

If you spot stranded whales it is important to call local authorities to summon help quickly. In Tasmania you can dial the Whale Hotline on 0427-WHALES or 0427 942 537.

John Pickrell is the editor of Australian Geographic and the author of Flying Dinosaurs: How fearsome reptiles became birds, published by NewSouth Books. Follow him on Twitter @john_pickrell.