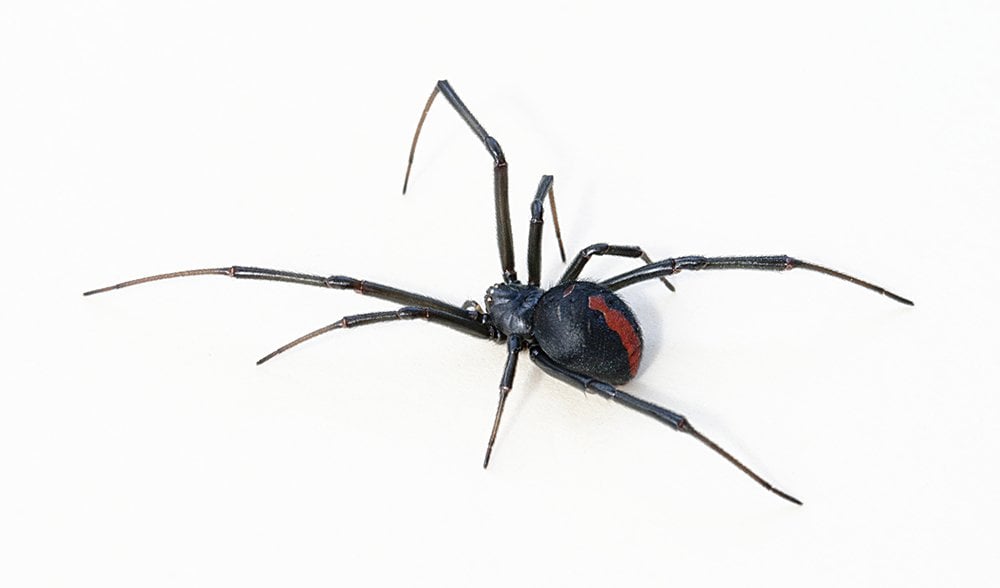 AUSTRALIA IS INFAMOUS for our deadly snakes, spiders and sea creatures. One of the most notoriously dangerous is the redback spider, Latrodectus hasselti, which is similar to the widow spiders found in the United States and worldwide.

What makes these creatures so feared is a combination of their potent venom and their preference for living near people.

But are these spiders really as bad as they seem? And what should we be aware of to minimise the risks of living with these hidden housemates?

How to recognise a redback

The female redback is immediately recognisable by the prominent long red stripe on her back, for which they are so aptly named. Females of the species tend to be larger than the males, with a body length of about 1 cm compared to 3–4 mm for males. One unique feature of redbacks’ mating is “sexual cannibalism”. During mating, not only does the female eat the male, but the male actually assists her in this process by flipping his body towards her so that he is closer to her mouthparts. Because the cannibalistic process is so slow, mating continues until the male succumbs to his injuries.

While it may seem counter-intuitive, this is thought to increase his chances of producing offspring by fertilising more eggs (mating is prolonged while the female is devouring the male). She is more likely to reject subsequent male attention. Males also can’t produce any more sperm.

Redback spiders are found throughout Australia. They live anywhere with an adequate food supply, shelter and a warm enough climate for breeding. For the most part nocturnal, they use a web to capture prey (generally insects, although they have been known to eat other spiders and even small reptiles and mammals).

They use their venom to kill their prey following capture. Of the hundreds of compounds in their venom, only a single toxin, alpha-latrotoxin, is responsible for deaths in humans and other vertebrates. A redback spider with a small lizard captured in its web. (Source: Calistemon/Wikimedia)

No matter how deadly an animal is, if it never meets a human it can never kill one.

Unfortunately, this is not the case for redbacks. Existing in a range of habitats from forest to desert (originating in Western Australia), the redback spider quickly took advantage of man-made habitats created by European settlers from the late 18th century onwards. Redbacks had colonised urban areas by the early 1900s.

Insects, their natural prey, are drawn to lights and waste. This makes urban areas an ideal hunting ground for the spiders.

Modern-day redback spiders rely on humans. A quick glance at the distribution of redbacks in Australia reveals it correlates well with populated areas. The spiders are most often found in or around human homes, with only a small proportion located outside urban areas.

This attraction to man-made habitats has facilitated the redback’s spread to other countries through world trade and global shipping.

In fact, the redback was unintentionally introduced, and has since established local colonies, in places including New Zealand, the United Arab Emirates, the United Kingdom and Japan.

New Zealand quarantine authorities commonly intercept the spiders in steel or car shipments. Any unintentional introduction is of concern both for local people, who may be unaware of the spider’s dangerous bite, and for the preservation of insects on which the redback would not normally have an opportunity to prey.

How dangerous are they?

The majority of reported spider bites in Australia are attributed to redbacks, which are responsible for around 2,000 hospitalised bite cases each year. However, not a single death due to redback venom has been reported for 50 years, since the introduction of redback antivenom.

Redback spiders tend not to be aggressive unless their web is disturbed. Sometimes they may just give a warning bite without injecting any venom if they feel threatened.

Therefore, not every bite will require a trip to the hospital or treatment with antivenom. In fact, antivenom is normally given only in cases in which the injected venom has caused severe illness. When the redback venom enters the body, it produces a range of effects collectively referred to as “latrodectism”. Typically this includes severe and escalating pain that emanates and progresses from the bite site, swelling and localised sweating. Nausea, vomiting, headaches, abdominal or chest pain, generalised sweating and increased blood pressure indicate a severe bite. Symptoms of latrodectism usually last for 24 to 48 hours, but can persist for weeks in some cases.

Nearly all instances are ascribed to the larger female spider. Both the juvenile and adult produce physical symptoms of similar severity. Bites from the smaller males are reported to give only mild, short-lived pain.

What we can do to live safely with them

Keeping in mind that redback spiders are not generally aggressive unless disturbed, following a few simple precautionary measures greatly reduces the risk of being bitten.

Webs are normally found in dark, dry, sheltered spaces. Be careful around buildings, under houses, in roofs and in sheds and garages. Always check first before reaching into your mailbox or other dark holes.

Check around children’s sandpits, toys and bicycles, inside helmets or any other equipment that gets left outside. Before use, always shake out any clothes, shoes, gloves or garden tools that have been left outside.

When gardening, wear gloves and shoes. Be careful when disposing of rubbish or litter piles. Inactive cars are also great places for redbacks to build webs. A redback spider in a corner of a household deck. (Source: Charles Haynes/flickr)

Be extra observant in warmer months, particularly in the late afternoon and evening, when the spiders are most active. Children should also be taught not to touch spiders.

If you find a redback or a redback egg sac and want to get rid of it, the easiest way is to squash it with something like a rolled-up newspaper, but only if you think it is safe to do so. Pesticides are not very effective in the long term unless used frequently, because redbacks will generally recolonise after treatment. If you do get bitten, don’t panic. For healthy people, a redback bite is not an immediate emergency. It is advisable to have someone stay with you and observe you for a few hours, in case severe symptoms develop, so that they can get you to a hospital.

Doctors can then monitor your situation and, if necessary, administer the antivenom. People with serious medical conditions (particularly heart disease), pregnant women, children or the elderly are at a much greater risk of severe, and potentially fatal, effects or complications. They should be monitored at hospital.

In any situation, if in doubt, seek medical attention.

Natalie J. Saez is Research officer at Institute for Molecular Bioscience, The University of Queensland.