The 10 loudest animals on Earth 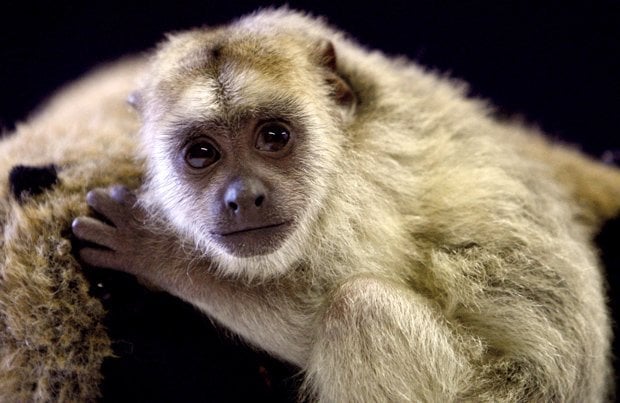 Howler monkeys' calls are up to 90dB – just less than a train and can be heard 5km away. Image credit: Getty Images
Reading Time: 4 Minutes • Print this page
Ever been called a loudmouth? You’ve got nothing on these noisy animals.

MOST OF THE TIME, it’s in an animal’s best interest to be undetectable, but sometimes it’s useful to be loud – very loud.

While a normal human conversation registers at about 60 decibels (dB), some animals can screech, scream and holler much louder than a subway train (100dB). The human threshold of pain is 120dB, and at 160dB your eardrum will rupture, but many loud animal calls are not designed for human ears.

The sounds these animals make are not just for show; spread over land and sea, each has a purpose. Socially motivated reasons include finding another individual, defending territory, romancing a mate or warning companions of predators.

“Altruism is very relevant to animal calling,” says Dr Michael Kokkina, a zoologist from the University of South Australia. “They want to spread the message far and wide.” However, the animal at the top of our list – the tiger pistol shrimp – generates noise as a way of stunning its prey.

Here are the world’s 10 loudest animals:

Native to the Mediterranean, this shrimp (pictured above with a gobie fish) leads the list as the loudest living animal, topping over 200dB – louder than a gunshot.

Fortunately, they live under the sea because the human ear can only sustain sounds up to 120-130dB – any louder can cause extreme pain to our ears possibly resulting in deafness.

Found in tropical reefs around the world, the pistol shrimp is equipped with a large claw that shoots jets of water. The water moves with such velocity it creates an air bubble. When this implodes, it packs a mighty punch, creating a shock wave louder than a whale’s call and which can kill other shrimp and fish up to 2m away. The sonic snap also emits tiny flashes of light, which momentarily cause temperature inside the bubble to reach near that of the sun.

Blue whales can make extremely loud whistling calls each other. Their sirens can reach 188dB, louder than jet engine or grenade explosion.

Sound carries further underwater, so the whales can be heard over 800km away. Blue whales are the largest living creatures on Earth, reaching up to 33m and weighing up to 200t, and their tongues can be as heavy as an elephant.

Bats are one of the few mammals that can use sound to navigate – a tactic called echolocation. The greater bulldog bat is currently the loudest known member of the family. They use their exceptionally loud sound – exceeding 140dB, louder than a chainsaw – to track the movement of fish in water pools.

Humans, however, cannot hear the echolocation call since these calls are usually ultrasonic – ranging in frequency from 20 to 200kilohertz (kHz) and outside of the human hearing range of between 20Hz to 20kHz.

Cicadas are the loudest insect. Only the males sing and they do so to call for a female. Two species, the green grocer and yellow monday, produce noise in excess of 120dB and can be heard from 2.4km away.

Each type has a different song so they don’t attract females of a different species. Cicadas are different to all other insects in that they have a musical drums in their abdomen called tymbals. Contracting the internal muscles causes them to buckle inwards and produce a pulse of sound. The hollow abdomen then amplifies the sound.

Grouping together when calling reduces cicadas’ chances of being eaten by birds because the sound bounces around making it difficult to locate individual cicadas. In addition to the calling or mating song, many species also possess a distress song, usually a broken and erratic noise emitted when an individual is captured.

A number of species also have a courtship song, which is usually a quiet call produced only after a female has been attracted nearby using the calling song. Cicadas are the most efficient and loudest sound-producing insects in existence.

One of the most recognisable big cats, the lion can roar to a level of 114dB, carried over 8km. And they need the distance – a pride’s home range can span over 260sq.km. Lions roar for several different reasons; one is to establish territory. Another theory suggests that roaring can be a method of social communication between family members in a pride. Lions are the only felines that travel in packs.

By rubbing their penis against their abdomen, in an act called ‘stridulation’, a boatman can generate sound of up to 99dB.

Aptly named, these insects have flat, boat-shaped bodies which they propel forward with oar-like back legs. Lucky for us, the sound is dissipated by the water and passers-by can’t hear it.

Coqui frogs are native to the island of Puerto Rico where their concentrations are very dense. This often results in each male croaking even louder to outdo his competitors. A single frog can generate sounds between 90-100dB – as loud as a jackhammer.

There are two parts to each call, the first, ‘co’, is to deter other males and second, the ‘kee’ helps females locate their potential mates.

Among one of the most distinguishable animal noises of all, a wolf’s howl can reach 90dB, just a little below the blare of a subway train.

Wolves commonly travel over long distances and great expanses to find food and it’s thought they howl to help them keep track of the location of their pack mates. Howling can also be for the purpose of announcing a pack’s position and establishing their territory.

Curiously, when wolves howl in chorus, the sound can be modulated in such a way that the pack’s numbers sound a lot bigger.

These monkeys are very social and are commonly found in large groups. Their calls can reach 90dB and can be heard up to almost 5km away when they call as a troop.

The calls are often used as an announcement of a group’s position and a warning to others to stay out of their territory. Howlers are able to make such sounds because they have an enlarged hyoid bone in their throat. And the howling takes a lot of energy – howlers may sleep for up to 15 hours a day to recharge.

Kakapos are the loudest bird, thanks to the male’s noisy mating call which can reach up to 132dB and be heard from over 7km away.

Their ‘booming’ noise is made using a thoracic air sac. This is interspersed with high-pitched metallic calls, which help the female find her mate.

A member of the parrot family, kakapos are flightless and nocturnal; they are also the heaviest, weighing 2-4 kg at maturity. Each one can live to 90 years old but will only breed every 2-5 years laying 1-4 eggs.