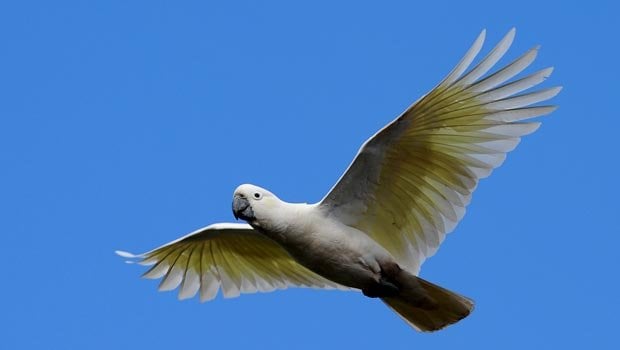 A sulphur-crested cockie on the wing over Sydney. (Credit: AAP/Paul Miller)
Reading Time: 4 Minutes • Print this page
Sulphur-crested cockatoos are booming in the Blue Mountains of NSW, pushing out more timid native birds.

A LARGE FLOCK of beautiful sulphur-crested cockatoos screech goodnights to us, overpowering the gentler noises of the forest.

We’re looking for birds in the blue-gum swamp near Winmalee in the Blue Mountains, north of Sydney. Or rather, listening for them. NSW National Parks bird expert, Carol Probets explains to our small group that we should be “looking” for them with our ears, not our eyes.

After a short walk down into the valley, we come to a creek that’s home to some scarcely seen platypus. Ferns, blue gums and tall, pink-trunked angophoras line the sandy track. In the dirt there are v-shaped scratchings, meaning that a lyrebird had been here very recently.

We look up at the sandstone cliffs as it becomes darker. We try to muffle all sound as we peer through our binoculars, scouring the trees for birds. Not that it seems to matter how quiet we are; the cockatoos screech overhead, their yellow crests catching the last of the sun, their white wings stretched wide.

Occasionally, in between their calls we can hear robins, cuckoos and currawongs.

Drowning out the dawn chorus of other birds

“The cockatoos screeching at dawn and dusk drowns out the fainter, more subtle noise of smaller birds,” says Carol, which may be forcing those that rely on vocal communication to find quieter habitats away from the cockatoos. If the outcome out here is that we are losing the normal dawn and dusk chorus, then “that’s a profound tragedy. For us and for the birds,” she says.

“When I first came to live here in 1983, sulphur-crested cockatoos were a rare sight. But now it’s impossible to spend time in the Blue Mountains without seeing flocks of them.”

Throughout the Blue Mountains these cockatoos – which thrive in areas of human habitation – are booming. Though they are natives to the region, their numbers have exploded to unusual levels in the last 10 years.

“I wrote in my notebook in 1985: ‘Three sulphur-crested cockatoos seen in Catalina Park (in Katoomba)’,” Carol says. “Just three of them seemed unusual at the time. But now, there are big flocks, often numbering 100 birds.”

In Sydney too, their numbers have doubled in the past 30 years, says Adrian Davis who studies parrots at the University of Sydney.

These confident cockies are little threatened by other species and make formidable competitors for the tree hollows that other species of cockatoo and owls also require for nesting. “They are taking over nest hollows from gang-gang cockatoos and even powerful owls,” says Carol. “Both these species are listed as threatened in NSW and it’s possible the sulphur-cresteds are at least partly responsible.” Cockatoos pushing other birds out

Carol works with the Blue Mountain Bird Observers (BMBO), a community group, with 130 members, that surveys bird numbers. They are concerned by the fall in populations of species including flame robins, gang-gang cockatoos, crimson rosellas, honeyeaters, noisy miners and powerful owls.

“It’s the cockatoos ability to live alongside people that is perhaps the greatest factor allowing them to boom, but artificial feeding in people’s backyards is another factor,” she says. “There also seems to be new populations of overconfident once-caged birds which have escaped.”

According to Clive Hambler an expert on animal behaviour at Oxford University in the UK: “Adaptability is one of the reasons the parrot family survive in cages as pets. They can alter their feeding habits and withstand the stress of noise and cramped spaces to fit in with people.”

“Species that can adapt well behaviourally…are likely to be the dominant species in agricultural and urban landscapes,” he says. “These species include rats and mice, weeds…and also the cockatoo.”

John Martin, wildlife officer at the Royal Botanic Gardens in Sydney, says that sulphur-crested cockatoos started to shift their range about 30 years ago: “The drought in the Bathurst and Orange region, forced more cockatoos to move east to look for food. But we really know very little about these birds and so that’s why we are we are conducting more research.”

To this end, the RBG together with the University of Sydney is conducting a survey of sulphur-crested cockatoos in the Sydney and wider metropolitan region. The study may extend to other regions like the Blue Mountains.

“We are asking people to send in sightings of the birds we have tagged around Sydney, through Facebook, to help with our study which may last for decades, charting the full lifespan of these animals,” says John. “Our aim is to assess the size of their population, how loyal they are to a particular habitat and their movements within and beyond Sydney. We are also looking into their behaviour and breeding patterns.”

It’s not just the cockatoos that are increasing in number. Rainbow lorikeets are also booming in the upper Blue Mountains, and the BMBO is conducting bird censuses in the region to monitor their numbers too.

Michael Randy, head birdkeeper at Featherdale Wildlife Park in Doonside says, “The lorikeets are adapting to pressures from human urbanisation and are also interbreeding with other bird [species], making them more adaptable. This interbreeding seems to make them stronger and less needy for specific foods, so they can forage more easily.”

While there seems to be little anyone can do to stop the rise of sulphur-crested cockatoos and rainbow lorikeets, Michael says there are things you can do to give less aggressive and rarer natives a helping hand.

“People can plant natives in their gardens such as grevilleas and bottle brushes to encourage the smaller birds back. They can also plant more trees, so that we cut done on the ‘islandisation’ that we are creating, chopping up the habitats of native birds,” he says. “In my own garden I have seen that this does help encourage back some of the smaller birds.”