Parrots and lyrebirds: the great pretenders 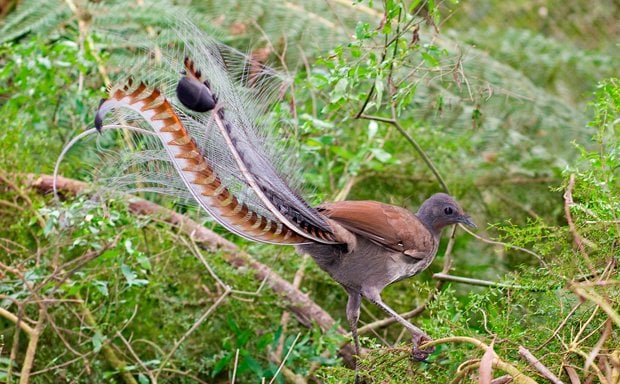 The superb lyrebird (<em>Menura novaehollandiae</em>) can mimic sounds like chainsaws and camera shutters. (Credit: Wikimedia)
Reading Time: 2 Minutes • Print this page
Why do parrots, lyrebirds and crows, have an amazing ability to mimic the sounds around them?

CHAINSAWS, SHUTTER-BOX CAMERAS and pneumatic drills. These are not totally unusual sounds, but what’s highly unusual is their origin: from the mouth of a native bird.

Lyrebirds have an astonishing repertoire of sounds they mimic from their environment, which includes more than 20 other bird calls, including kookaburras, as well as sophisticated mechanical sounds.

But just why some birds learn and repeat sounds – lyrebirds, crows, budgerigars and parrots are known to –  is a mystery experts are gradually unravelling. “It’s a part of their language,” says Jaynia Sladek, from the Australian Museum’s ornithology department. “For some species it’s like advertising ‘I am very fit because I can learn a lot of different birds’ [calls]'”.

The male lyrebird, with his wide-ranging syrinx (a bird’s vocal organs), will sing a medley of mimicry to attract and impress a female; the more detailed and varying his repertoire is, the more interesting it seems to potential mates – although the clanging of a construction site may not be appealing to us, it’s pabulum for the curiosity of a female lyrebird. Much like females of other bird species, they do not take part in the imitating, but simply judge the competing males’ patchwork symphonies.

Once learnt, it seems a lyrebird rarely forgets a call, and these sounds are also passed on through the generations. There are some lyrebirds in Victoria, Australia, that still recreate the sounds of axes, saws and old-fashioned cameras which haven’t been used in the region for years.

Because the best singers will tend to be photographed more by experts, they are the most likely to be the best imitators of camera noises and also to pass both these abilities onto their offspring, says Martyn Robinson a naturalist at the Australia Museum in Sydney. “Because they’re the most successful birds [with females] and the most photographed birds, they’re imitating all the old sounds,” he told Australian Geographic.

This correlation between genetic fitness and mimicking ability is also seen in cockatoos. As a flock-living bird, their position in the pecking order is linked to the extent to which other birds will listen to them. “You’ll get a number of talkers within those flocks, because of their status,” says Martyn. “If it’s someone worth copying, they’ll do it.”

Recent evidence has shown that ex-captive cockatoos that have been let loose can teach wild birds to talk.

It’s not just cockatoos and lyrebirds that have the ability to imitate. Corellas, bower birds, magpies and currawongs also have been heard mimicking calls and songs. Even common ravens and crows have an impressive ability to mimic sounds. “They have been taught to do pieces of music and it’s like listening to a tape recorder,” says Martyn.

Why do parrots and other birds talk?

These birds are not all closely related species, so there is no over-arching link between them, other than their desire to mimic. While some female bird species are attracted to a male’s flashy colouring or ability to dance, the females of these species are more impressed by a mate’s mimicking abilities.

Martyn says that while it’s possible that all birds could imitate sounds, many birds may not use this skill because it’s not attractive to potential mates.

“It depends very much on the species,” he says. “Even within our own species, people like different things. Imagine the much greater differences from species to species.”