The world’s 10 most devastating volcanic eruptions 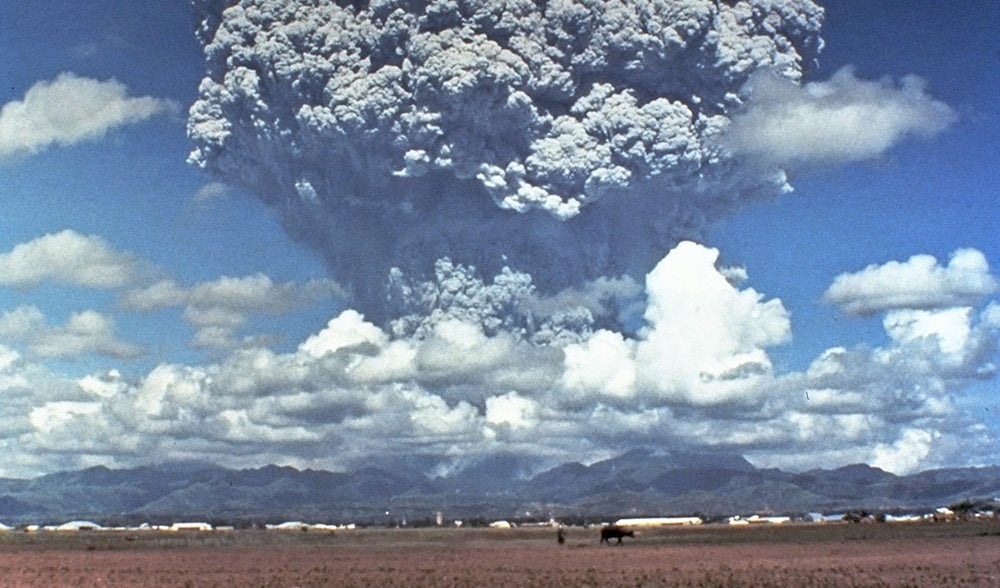 The eruption of Mt Pinatubo in the Philippines in 1991 was the second largest volcanic eruption of the 20th century. Image credit: Dave Harlow, USGS
Reading Time: 6 Minutes • Print this page
Volcanic eruptions make up a fifth of all natural disasters. Here are 10 of the most devastating eruptions in recent human history.

VOLCANIC ERUPTIONS HAVE the power to destroy whole cities, alter global climate and devastate economies. They can produce rivers of molten lava, crushing mudflows, suffocating ash and toxic gases that wreak havoc across the globe for years after.

Similar to the Richter scale for earthquakes, the size of a volcanic eruption is measured using the Volcanic Explosivity Index (VEI). The VEI ranks volcanic explosions from 1 to 8, with 1 being a gentle outpouring of lava and 8 being a mega-colossal explosion.

While a good indicator, the magnitude of an eruption does not always infer its impact. One of the most common ways to measure an eruption’s devastation is by calculating the estimated loss of life. Deaths do not just occur from the products of an eruption but can also occur because of loss of food.

“Crops can be buried by ash or animals poisoned by chemicals in the ash,” says Kelsie Dadd, an expert in the field of volcanology at the University of Sydney. “Large eruptions can be devastating because of the temperature decrease, which can cause crops to fail over large areas”.

The 2010 eruption of Eyjaflallajokull in Iceland resulted in the largest air-traffic shut-down since World War II, with over 100,000 flights cancelled, costing the airline industry worldwide an estimated US$1.7 billion. (Image: David Karnå/Wikimedia)

From an eruption’s magnitude to its death toll to its economic cost, the impact of a volcanic explosion can be enormous. Here are 10 of the most devastating volcanic eruptions in human history:

Mt. Tambora is the deadliest eruption in recent human history, claiming the lives of up to 120,000 people. On 10 April 1815, Tambora erupted sending volcanic ash 40km into the sky. It was the most powerful eruption in 500 years. Upon entering the ocean, the force of the pyroclastic flow caused the creation of a series of towering tsunamis. Thanks to the enormous amount of SO2 emitted, the world experienced a severe temperature drop that led to global crop failures. Thousands starved to death in China while typhus spread across Europe. In the two years after the explosion, the price of grain in Switzerland more than quadrupled.

The eruption of the Indonesian volcano, Krakatoa, was one of the most violent eruptions in recent human history – completely destroying the island on which it resides. On the morning of 27 August, a series of massive eruptions tore the volcano’s walls apart. Krakatoa’s final eruption was four times more powerful than the largest bomb that humans have detonated. Its airwaves travelled seven times around the globe. It produced a series of tsunamis that devastated the region, killing around 36,000 people and destroying whole villages. Some have estimated the cost of the eruption to be as high as $1.5 billion.

An 1888 lithograph of the 1883 eruption of Krakatoa. (Image: Lithograph: Parker & Coward, Britain)

The devastation of the Laki eruption was felt globally for years after the event. The Laki eruption lasted for 8 months, emitting about 14.7km3 of lava. Toxic gases poisoned crops and killed 60 per cent of Iceland’s grazing livestock. The volcano released enough SO2 to cause acid rain and global temperatures to drop. The eruption resulted in a famine that killed over 10,000 Icelandic people, roughly a quarter of the country’s population at the time. As Laki’s toxic eruption travelled south, it killed 23,000 in Britain and caused a famine in Egypt. Some environmental historians believe the European famine caused by the eruption may have been a catalyst for the French Revolution.

Until Mt Pelee produced the worst eruption of the 20th century, the volcano was thought to be dormant. On 8 May, Mt Pelee exploded hot gas and volcanic debris, destroying the entire city of St Pierre. Of the 28,000 people living in St. Pierre, only two survived. The cost of the eruption was estimated at $50 million.

The first known eruption of Ilopango in 450 AD is the second-largest volcanic eruption in the last 200,000 years. This eruption was so large that it is thought to have destroyed several Mayan cities. The skies were filled with ash and dust for more than a year. The eruption is estimated to have killed up to 100,000 people and displaced more than 400,000. It is thought to be the cause of the global cooling of AD 535-536, which led to crop failures from Rome to China.

Scanned engraving of an eruption of Ilopango in 1891. (Image: Appleton’s Annual Cyclopaedia and Register of Important Events of the Year 1891, D. Appleton & Company, New York, 1892)

The explosion of Mt. Unzen remains Japan’s deadliest volcanic eruption. The explosion collapsed the dome of the volcano, generating a massive landslide that buried the city of Shimabara and flowed into the ocean, triggering a tsunami 57m high. The catastrophe killed about 15,000 people. The cost of damages to agriculture and fish facilities was estimated at $17.4 billion yen (roughly $150 million).

Despite its relatively medium-size, the eruption of Nevado del Ruiz had devastating results. The most destructive part of the eruption was the resulting mudflow, which buried the town of Armero and took 20,000 lives. Listed by the International Disaster Database as the most expensive volcanic eruption, Nevado is said to have cost an estimated $1 billion.

Steam erupts from Nevado del Ruiz in September 1985 prior to the major eruption on in November 1985, erasing Armero from the map. (Image: U.S. Geological Survey)

The Mount Pinatubo eruption was the second largest volcanic eruption of the 20th century. On 15 June, the volcano erupted, creating an ash cloud that rose 35km into the air. The eruption created massive avalanches of pyroclastic flows and ejected nearly 20 million tons of SO2 into the stratosphere, causing global temperatures to plummet. While only 722 were killed, the eruption left more than 200,000 people homeless. The eruption cost upwards of $200 million.

Mt Vesuvius has erupted several times in human history, however, the terrifying eruption of 79AD is the most well known. On 24 August, Vesuvius erupted ash, mud and toxic gases, completely burying the nearby cities of Pompeii and Herculaneum. The eruption killed 16,000 people. It took until 1595 for the cities to be excavated and rediscovered. If the same eruption occurred today it would cost in the billions.

Painting depicting an eruption of Vesuvius seen from Portici by Joseph Wright of Derby (1734-1797). (SourcE: Art collection of the Huntington Library, Pasadena, California)

For hundreds, maybe even thousands of years, the Santa Maria volcano remained inactive. That is, until 1902, when a series of earthquakes in the Central American region caused it to erupt violently. The eruption killed at least 5000 people, although many believe this number to be understated. The eruption produced a column 28km tall, producing 5.5km3 of pyroclastic debris over the course of 19 days. The ash from the eruption darkened the skies of Guatemala for days and spread all the way to San Francisco. It is thought to have cost well over $1 million in damages.