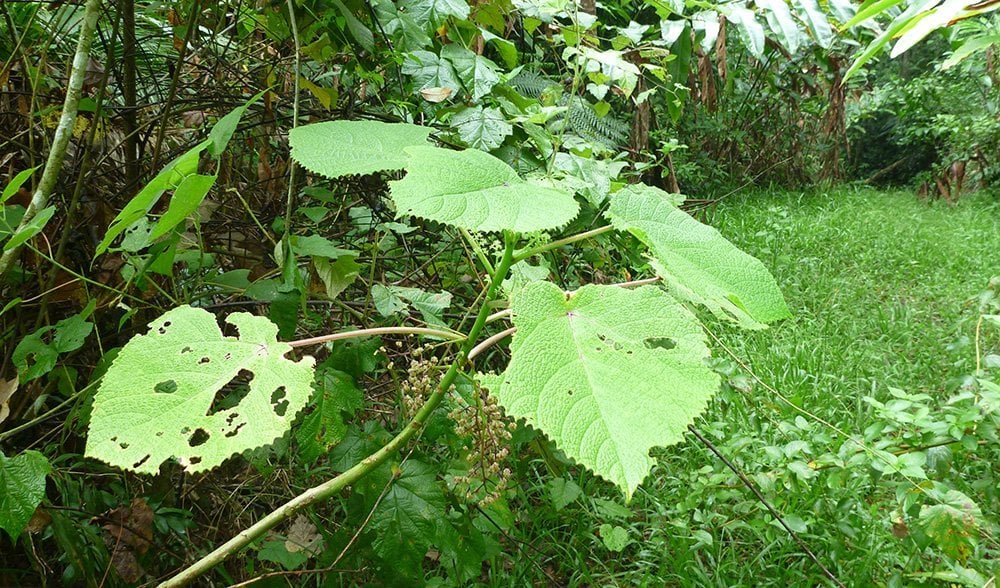 A typical Gympie-Gympie plant in Far North Queensland. Image credit: Hugh Spencer
Reading Time: 3 Minutes • Print this page
Find out all you need to know about the Gympie-Gympie stinging tree.

Don’t let its harmless, fuzzy-leafed appearance fool you: the Gympie-Gympie stinging tree will leave you in agonising pain from the gentlest touch. Here’s all the information you need on this potent plant.

The Gympie-Gympie is the most similar to the Atherton Tableland Stinger, with the other two species growing over 20 metres, but is said to have the worst sting of all, and possibly the most painful sting of any plant in Australia.

The Gympie-Gympie has broad, oval or heart-shaped leaves (which appear furry due to a dense covering of stinging hairs) with saw-tooth edges, and white or purple-red fruit. The stems and fruit are also covered in the stinging hairs.

Although called a tree, the Gympie-Gympie is a soft-wooded shrub that can reach 4-5m, but is often found as a smaller shrub around 0.1-1m tall. Small plants earn the appropriate name of ‘ankle biters’, as the unwary traveller brushes against them.

Most at home in the tropics, the Gympie-Gympie is able to grow in northern New South Wales, but most common from Gympie in southern Queensland to Cape York Peninsula, especially common in the Atherton Tablelands. The mulberry-like seeds are dispersed by birds.

Scientist Dr Hugh Spencer, who established the Cape Tribulation Tropical Research Station with Brigitta Flick, says the trees are uncommon in the lowlands but are in much higher numbers in the upland areas such as Wongabel state forest near Atherton.

The trees are opportunistic and will often sprout up at the scene of a major disturbance such as a cyclone or cleared area of forest. They like sunny areas protected from the wind and are often found along the edges of streams, walking tracks and roadways through the forest.

When touched, the tip of the silica hairs can break off. Hugh says this then turns the hair into a “self-injecting hypodermic needle.”

He describes the sting as “Initially like being attacked by wasps, then you get whitening and swelling at the site, and then if it’s really bad you get sweating – liquid just drips out of your skin.”

The actual chemicals contained in the venom are not completely understood, though Hugh thinks it could possible be a peptide (called moroidin, hence the species name) coating of the hairs may be responsible for the intensity of the pain. The hairs can become embedded in the skin, which can lead to long-term pain and sensitivity – there are many accounts of people suffering for months from a sting.

The Gympie-Gympie is just as capable of stinging when its leaves are dead. Hugh says even people looking at specimens in a collection can be stung – the toxin in the hairs is sealed off as it would be in a little glass vial, and seems unaffected by age.

Place in the ecosystem

The Australian stinging trees are native, and are eaten by some mammals, birds and insects without harming them, as well as providing places to live.

What do to if you get stung by a Gympie-Gympie

The Cape Tribulation Tropical Research Station has treated many people for Gympie-Gympie stings.

Hugh says that if you’re stung, the most important thing is that you do not rub the area, as this can break off the hairs and make them very difficult to remove. He says applying diluted hydrochloric acid (1:10 by volume) to neutralise the hair’s peptide coating, followed by waxing strips to remove the stinging hairs should provide relief within around one and a half hours. While you may be you would be “miserable as hell” once stung, says Hugh, treatment with the acid/hair strip approach should reduce the severity and duration of the pain.

Although many people may have heard to search for the cure in the Cunjevoi plant commonly found nearby, Hugh says rubbing the sap of this plant on the affected area is ineffective and may even make the pain worse.