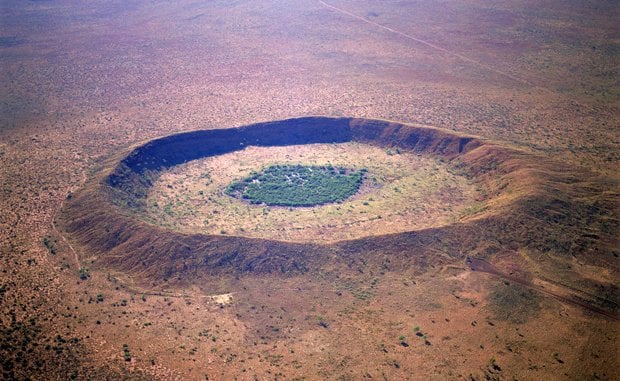 The Wolfe Creek crater in Western Australia is the best known meteorite crater in Australia. Image credit: Dick and Pip Smith
Reading Time: 2 Minutes • Print this page
Australia has 30 impact craters out of 176 recognised worldwide. See our gallery of some of the best.

AUSTRALIA IS AN ancient land. Some of the rocks in the Pilbara region of Western Australia, for instance, are 3.5 billion years old, while other sedimentary rocks from Mt Narryer, WA, have been dated at around 3 billion years and contain much older mineral grains derived from pre-existing rocks that are 4.4 billion years old. Some of these ancient rocks have lain undisturbed for almost a billion years.

The Australian landscape has been gradually transformed by weathering, which still continues at a gentle pace. But a few features scattered over the land seem to defy any explanation by way of Earth’s typically slow weathering and geological processes. The sculptured landscapes of hills and valleys are occasionally pitted by regular circular structures, often mere hints. At other times they are clearly recognisable as large, deep craters.

In Australia seven distinct craters, ranging in size from about 25m to around 1km in diameter, have been recognised. Five of these are associated with meteorites. In addition, there are another 30 very much larger but deeply eroded and enigmatic circular scars that present some evidence of an origin by impact. Among the largest are Woodleigh in Western Australia (60-70km across), Lake Acraman in South Australia (greater than 35km) and Tookoonooka in Queensland (50km in diameter). A map of the suspected meteorite craters in Australia.

While their sizes have yet to be determined precisely, these three structures are clearly very old, and in the case of Woodleigh and Tookoonooka they have become buried beneath a mantle of younger sediments, such that they are no longer visible at the surface.

Thirteen other structures have been recognised, either as surface features or by geophysics. For these, there is little or no evidence other than their distinct circular shape to suggest they were formed from an impact. These structures include two underwater craters, Mercury and Maningrida, which occur off the coast of northern Australia.

On land, 11 structures tentatively identified as possible impact sites include:

At this stage the origin of these structures, both on land and in the sea, are considered speculative. In total, some 50 of them have been recognised in Australia, to highly varying degrees of certainty.

It is clear that most were formed by explosions. But was the source of the explosions from within Earth’s crust, or was it an extraterrestrial source, such as a giant meteorite, asteroid or comet hitting Earth? Scientists must often act as sleuths to investigate the evidence of impacts. The most important answer they’re looking for is: can they happen again, and will they pose a threat to civilisation?

This is an edited extract from the book Australia’s Meteorite Craters by Alex Bevan and Ken McNamara, published by the Western Australian Museum.