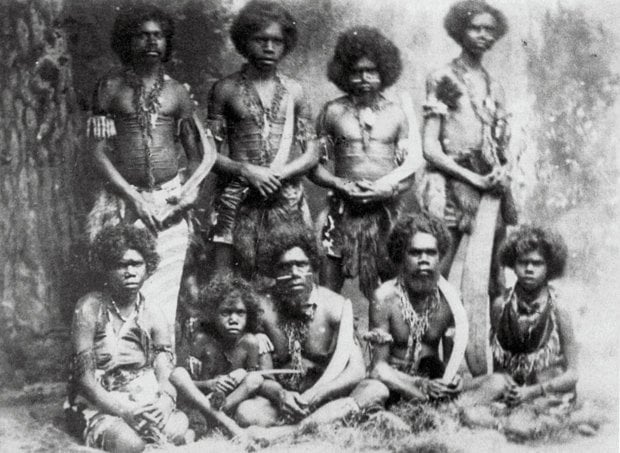 Tambo (likely the man sitting second from right), was one of 9 Aborigines who were circus performers in the 1800s. (J Cassady)
Reading Time: 4 Minutes • Print this page
A gruesome discovery revealed the fate of Tambo, an Aboriginal man put on show in the USA in the 1800s.

IN THE DEPTHS OF a basement at a nondescript funeral parlour in suburban America, a surprise discovery began the unravelling of a fascinating and convoluted tale stretching all the way back to 19th-century north Queensland. The find revived an almost-forgotten story of indigenous history and brought some closure for descendants of a group of Aboriginal men and women whose fates, until then, were unknown.

In 1993 staff at J.C. Smith’s funeral home in Cleveland, Ohio, were clearing out the building after the business closed, when one of them uncovered the mummified body of an Aboriginal man. Tambo, as he was known by his English name, was one of 17 indigenous men, women and children – including his wife – who were ‘recruited’ as star attractions in Barnum and Bailey’s famous circus during the 1880s and ’90s.

Coincidentally, anthropologist Roslyn Poignant, an honorary research fellow at University College London, had been researching the history of Tambo and his kin and was in the USA at the time of the discovery. “It was remarkable that Tambo had escaped either being consigned to a pauper’s grave or having his bones deposited in a museum,” writes Roslyn in her book Professional Savages: Captive lives and western spectacle. The discovery gave Roslyn new leads in piecing together the fates of these people, a quest which took her across three continents.

The story begins in 1883 on Hinchinbrook and Palm islands, in Far North Queensland. Robert A. Cunningham, a recruiter for Barnum and Bailey’s circus, had travelled there to find subjects for his next show-stopping exhibition, Ethnological Congress of Strange Tribes. He sought to add to his collection of indigenous people, which already included Zulus from Africa, Toda from southern India, Nubians from southern Egypt and Sioux from the USA.

It is still unclear just how forcefully Cunningham persuaded his subjects, but the records show that six Aboriginal men, two women and a boy from the Wulguru clan on Palm Island and Hinchinbrook made their way to Chicago by ship in 1883. More than likely, Cunningham tricked them or offered incentives, such as clothing and the promise of adventure. “Displacement and dispossession in the colonies, chance and curiosity” may also have played a role, writes Roslyn. Only two of the first group spoke any English and records indicate they went with Cunningham willingly.

Promoted as ‘Australian cannibals’, they performed – alongside Jumbo the elephant – dancing, singing and throwing boomerangs to delight the crowds. More than 30,000 people came to see these ‘Australian savages’ on their first day in Chicago. “I think it would have been the most horrific experience,” says Jacob Cassady, who runs a small museum and tourism venture on Aboriginal history and culture at Mungalla Station in north Queensland. This includes an exhibition about the story of these people. A large, softly spoken man, Jacob is a descendant of Tambo. “They wouldn’t have even known what an elephant was,” he says. “And they would have been missing their family and were unable to carry out traditional ceremonies.”

The group toured the dime museums and fairs of the USA, which were famous for their ‘edutainment’ – entertainment and moral education for the working class. Other attractions included bearded women, people with disfigurements, dwarfs and giants, among others.

From the USA to Europe and Russia, the group allowed themselves to be measured by anthropologists and they posed, apparently unforced, in European clothing for photographs, Jacob says. “But when you look into their eyes – they tell a different story,” he adds. There was evidence they were given some money and some freedom at the end of a performance season, but the group was heavily reliant on Cunningham for food, shelter and medical care.

It’s believed Tambo succumbed to tuberculosis or pneumonia barely a year after leaving Australia – it’s unclear how old he was when he died. Cunningham was persuaded to hand over Tambo’s body for permanent display – and before the traditional death rituals could be completed, the corpse was taken away and embalmed. “He was subjected to a final, terrible indignity,” writes Roslyn. “His embalmed body was placed on show in Drew’s Dime Museum, and it remained on display there and elsewhere in Cleveland until well into the 20th century.”

One by one, members of the group fell ill and died. By 1885, just three remained: Jenny, her son Toby, and Billy. It’s thought the trio eventually went back to Australia with Cunningham, but the records are unclear. Cunningham returned to Australia in 1892 to recruit a second group of mostly Nyawaygi people, from Mungalla station, but the heyday of dime museums was at an end and the eight performers were less successful. Again, many died or disappeared until just two remained. They returned to Australia and were likely taken to a mission or Aboriginal reserve, where they were not heard of again. Tambo finally came home in 1994, about 110 years after he left for the USA. He was buried in a traditional ceremony led by Walter Palm Island, a descendant of Tambo, on Palm Island.

“I remember Granddad Wally [Walter Palm Island] telling me that when he was a kid that some relations were taken away to the circus, but I thought…the story was a bit romanticised,” Jacob says. “But the more I heard about the story, the more I learnt about it, and the more amazed I was. It thought it was unbelievable.”