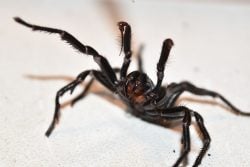 Low-down on the funnel-web spider – and how an evolutionary accident made it one of the most dangerous spiders on Earth, able to kill a human in 15 minutes.

Venom from a species of tarantula could lead to the first effective treatment of irritable bowel syndrome.

An enormous Sydney funnel-web spider has been handed in to have its venom ‘milked’, to help with the production of anti-venom. A genetic mutation has caused a rare colourful funnel-web spider