Home News Installation of wooden poles could save Aussie gliders

Installation of wooden poles could save Aussie gliders

Aussie gliders may not often turn up as roadkill, but their ability to travel from tree to tree is hampered by the construction of large scale roads.
By Angela Heathcote • July 16, 2018 • Reading Time: 2 Minutes • Print this page Gliders don’t regularly end up as roadkill, but they are adversely affected when large roads are erected in remnant habitat and their ability to travel is obstructed. Image credit: SaveLightstock/Shutterstock

A NEW STUDY has found that installing large wooden poles along new highways assist gliders by allowing them to seamlessly travel throughout their natural habitat.

Gliders don’t regularly end up as roadkill, but they are adversely affected when large roads are erected in remnant habitat and their ability to travel is obstructed.

“They can glide between gaps in canopy cover but once those gaps get to 40-50 m it gets difficult for them to get to one side of the road to the other,” Glider expert Ross Goldingay tells Australian Geographic.

Ross came up with the idea of “glider poles” back in the early 90s, but the new mitigation strategy failed to gain any attention from councils or road managers.

This was mainly because the success of the structures was relatively unknown and a lot of strategies were more focussed on mitigating the impacts roads had on koala populations.

“When you look at the structures that are used in NSW it’s all guided by koala needs, such as under passes, timber railings and land bridges. Gliding mammals have been overlooked because they’re a bit more obscure than koalas and don’t turn up as roadkill,” Ross says.

However, a new study by Ross and his fellow authors Brendan Taylor and Jonathan Parkyn, published today in the journal Australian Mammology, has proven that gliders are using the poles to travel. 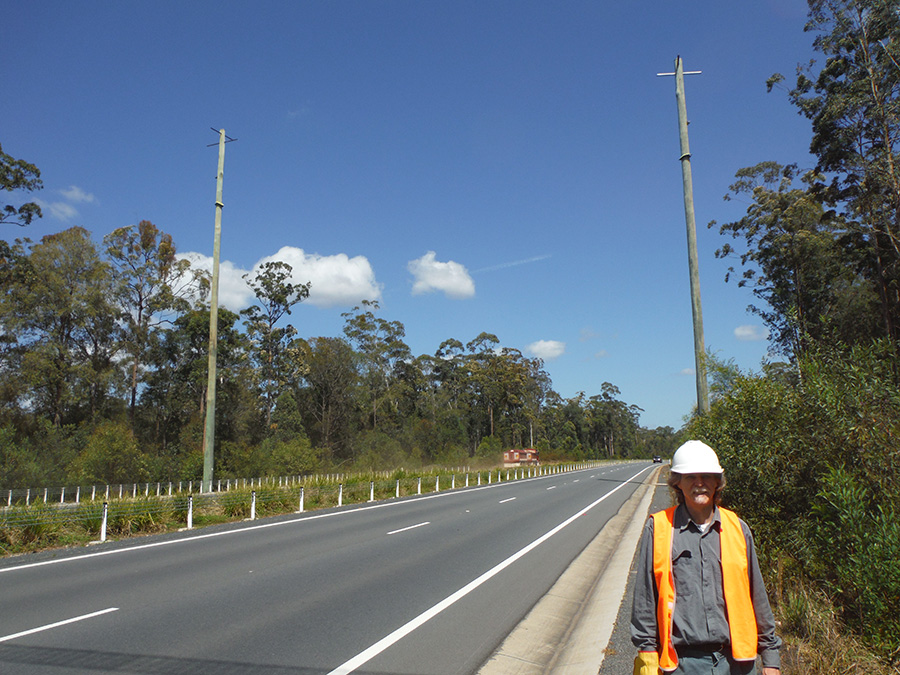 The team of researchers monitored two pairs of glide poles and a canopy-bridge over three years at Port Macquarie, New South Wales and found that sugar gliders, squirrel gliders and feathertail gliders regularly used the poles. They even discovered that the endangered yellow-bellied glider had used the poles on two different occasions.

“We high-fived when we saw our first photo of a yellow-bellied glider on a pole. This extends the size range of species documented using glide poles,” Ross says.

At the moment, the glider poles are only being erected where new roads are going in. The biggest issue, Ross says, is the existing roads.

“There are some places like south-east Queensland when the existing major road network is just horrendous in terms of the way it cuts across glider habitat and basically there’s no money to put them into existing roads.

“When a new road is going in there’s a budget and they can allocate part of that to mitigation and monitoring. Somehow we need to convince councils or road managers that they should put these things in retrospectively.”