Dingo bones excavated in 1960s are the oldest ever found The dingo was brought to Australia by boats from Asia. Image credit: Mitch Reardon
Reading Time: 4 Minutes • Print this page
Radiocarbon dating on the oldest dingo bones ever found has sparked a re-think of the arrival date for Australia’s iconic canines.

DINGO BONES from the Madura Cave on the southern edge of the Nullarbor Plains have been accurately dated half a century after their excavation in the 1960s. Discovered to be between 3348 and 3081 years old, it has been confirmed that they are the oldest dingo bones ever found.

Previously, only approximate dates from the Madura Cave were available, as archaeologists relied on dates garnered from nearby deposits of charcoal rather than the actual dingo remains.

“The technology has improved enormously,” says Professor Sue O’Connor, an archaeologist from ANU. “I got a bone date back in the 1980s when I was working on a site in the Kimberley, and had to use a quarter of a kilo of bone.”

“The dating method now is minimally destructive, and the methods for removing contaminants are very good, so you can get very accurate dates compared to, say, getting dates from the charcoal from a nearby hearth.”

Sue and her colleagues published their findings in Scientific Journal, and the dating of the bones has re-sparked debate surrounding the dingo’s arrival in Australia, their involvement in driving thylacines to extinction on the mainland, and their role in re-organising Indigenous societies.

The dingo, Sue says, was brought to Australia by boats from Asia.

“I excavated a site in East Timor, years ago, where we actually found the burial of a dog. That dates to 3000 years ago. That’s a direct date on the bone itself,” she says.

Analysis of the dog bones and nearby human remains showed that the dog shared a similar diet with the people, which, along with the formal burial style of the dog, suggests it was a domesticated animal.

Sue believes domesticated dogs such as the one she unearthed in East Timor were brought to Australia by visiting boats and established wild populations throughout the mainland.

Their bone dating also brings into question how quickly dingoes spread through the rest of Australia from their northern entry point. Most researchers estimate that the dingo took between 500 and 1500 years to colonise the mainland, but Sue and her colleagues write that they “see no reason to suggest such a long colonization time”.

Rather, because the dingo would have been re-domesticated by Indigenous societies, and people would have facilitated their spread, the iconic Australian canines could have spread to all corners of the mainland within a few hundred years. 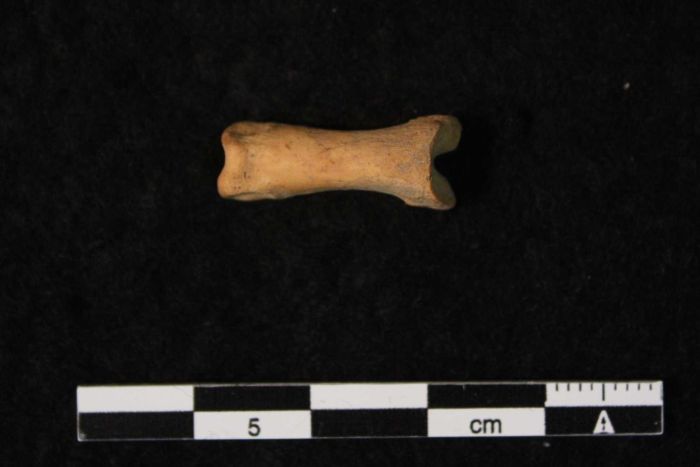 One of the bones from Madura Cave analysed for the study. (Image Credit: Jane Balme/Uniersity of Western Australia)

“Indigenous people in Australia, even at the time of European contact, were still taking feral dingoes from the wild, taming and raising them from the time they were pups, and they were kept as camp dogs,” says Sue.

“If you have Aboriginal people who have access to an animal that’s useful, they’re probably moving them around just like they move other resources around. Feeding them, supporting the litters, that sort of thing.”

Sue and her colleague, Professor Jane Balme from UWA, have written that the use of the dingo as a ‘living technology’ by Indigenous people could have re-defined the role of women.

“They were used by women to guard the camp, women took them out hunting – not necessarily active hunting, but scavenging. The dingoes would sniff out where the small animals like bandicoots and goannas were in holes, and then they could be dug out more easily by women.

“It allowed women to be more effective hunters.”

Did dingos wipe out mainland tigers and devils?

Despite a study that ‘cleared’ the dingo of their assumed role in the disappearance of thylacines and Tasmanian devils from the mainland, the new date established for the oldest dingo bones may re-implicate the dingo in the extinction of Australia’s other large predators.

“Our dating has brought the two things even closer together in time,” says Sue. “If you used to go with the old argument that dingos arrived between 5000 and 8000 years ago, they had an awfully long period of overlap with the tiger and the devil. If you look at our new dates, it brings the two much closer together.”

Some researchers say that the extinction of devils and tigers around 3000 years ago was due to the improving hunting efficiency of Indigenous people. But Sue says dingoes could have actually been part of that technology that saw Indigenous people catching more small marsupials and other prey, out-competing thylacines and devils.

“What we are arguing is that it may simply be that dingos have changed women’s access to prey. Now, women are going out, hunting using dingos, and its giving them a lot more access to smaller animals and protein.”

While more evidence is needed from the fossil record to back up this theory, it’s likely that many things, such as aridification of mainland Australia, as well as the arrival of the dingo, saw the disappearance of devils and tigers from the mainland.