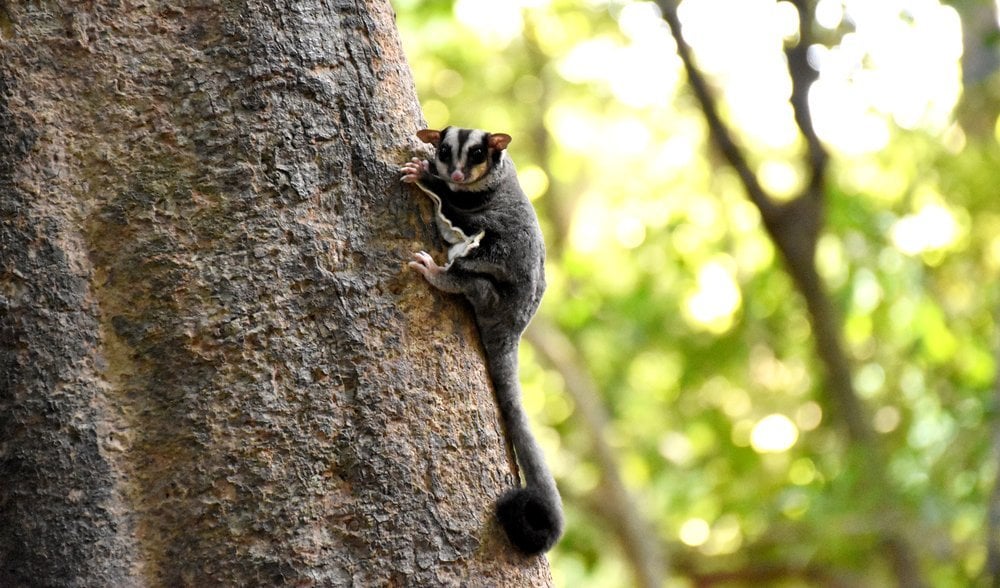 A sugar glider. Image credit: Shuttershock/CKIZE
Reading Time: 2 Minutes • Print this page
Sugar gliders are the main predator of some of Tasmania’s most endangered birds, including the imperilled swift parrot.

A NEW STUDY has found that sugar gliders (Petaurus breviceps), while native to the Australian mainland, were introduced to Tasmania in the 1800s.

According to Ecologist Catriona Campbell, the lead author of the study published in the Journal of Diversity and Distributions last Friday, sugar gliders were taken to Tasmania from Victoria in 1835 as pets.

“They quickly escaped their enclosures and within ten years were seen in local forests surrounding Launceston,” she told Australian Geographic. And they’ve since become the main predator of some of Tasmania’s most endangered bird species.

By combining historical museum records and articles with genetic data of sugar gliders across Tasmania and the Australian mainland, the researchers were able to determine the gliders invasive status.

“We compared the Tasmanian sequences to those on mainland Australia and found that the Tasmanian individuals sequenced were all identical to each other, and were closely related to those from Victoria,” Catriona said.

Catriona said that the study highlights the increasing difficulties wildlife managers are having with determining what is native and what is invasive.

“The can use it [the framework] to help them work out if a new species in an area arrived due to a human induced movement and therefore can be regarded as an invasive species which may need to be managed or if the species has undergone a natural range expansion and therefore is considered a native species requiring no management or different management.”

A change in legislation

Dejan Stojanovic, who was responsible for a recent crowdfunding campaign to build a hundred nesting boxes fitted with a mechanical door to protect swift parrots from the glider, welcomed the news. “The study is very important because it opens a much wider array of management options for protecting swift parrots from their main predator,” he told Australian Geographic.

“Sugar gliders are currently listed as a protected species in Tasmania, and this study shows that this listing is not correct, and in fact they are a pest species in that state.

“Sugar gliders kill and eat approximately half of the female swift parrots that attempt to nest on mainland Tasmania in any given year.

“The impact of this predation pressure resulted in the swift parrot being up-listed to critically endangered recently.”

Catriona is also in favour of a change to the gliders status.

“A change in current legislation around the native status of the sugar glider in Tasmania is essential. What is important here is that state government, land and wildlife managers in Tasmania really think about how to appropriately manage the issue to the satisfaction of the public so we don’t see species extinctions in Tasmania due to glider predation,” she said.