During an AG sponsored expedition focused on documenting the impacts of climate change in Queensland, a team of scientists spotted the elusive white lemuroid possum— an animal that has been almost wiped out due to warming temperatures.
By Dean Miller • October 12, 2017 • Reading Time: 2 Minutes 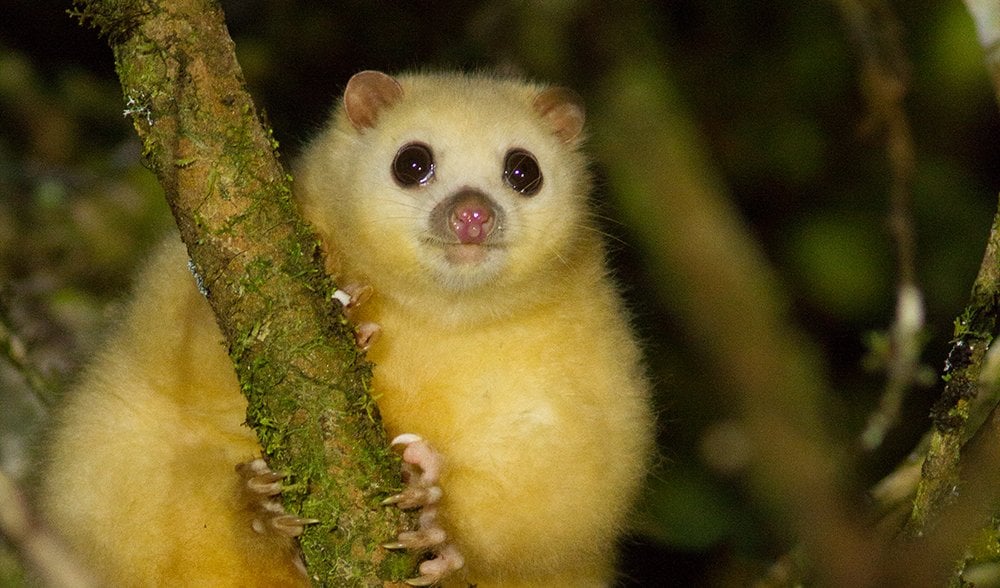 AS WE SET out on our expedition, Three Peaks in Three Weeks, to document how climate change is impacting Queensland’s tropical cloud forest communities we were looking for, and hoping to see, many different plants and animals. But the one animal we were all secretly wishing might reveal itself was the white lemuroid possum (Hemibelideus lemuroides)— said to be Australia’s first mammal to be severely impacted by climate change— last seen on Mount Lewis and presumed extinct by several scientists.

To provide us the best possible opportunity of seeing the possum, which to us might as well have been Bigfoot due to the rarity of sightings, we had set up thousands of dollars worth of camera traps all over the forest. These were checked every morning with childlike enthusiasm, hoping the little digital screen on the back would show us that this little animal was still living on the mountains. But unfortunately, nothing other than some a small native rat, and a rainforest dingo showed up— both great finds, but alas not the possum. Spotted by the naked eye

At the same time, we had teams walking the many tracks and roads at night with powerful torches in an attempt to catch a glimpse of white fur in the canopy. Sometimes simple is the best and nothing can quite compete with the human eye for spotting a feature in a landscape that just doesn’t quite fit. Nothing could be truer of the white lemuroid possum.

It was on the last night of our expedition on Mount Lewis while we were walking a track located close to our base camp when one of our team members yelled with delight that they had found one!

Right there, just 10m above our heads looking straight down at us was the white lemuroid possum. It was probably wondering what all the fuss was about as it was completely relaxed in its little perch up in the tree. For 20 minutes we all snapped away with cameras.

For many of us this was indeed the highlight of the trip. A sighting of a rare animal that symbolises so much about these cloud forest communities and their vulnerability.

Perhaps more than anything it gave us hope for the future of these ecosystems. The moment will stick with me forever as seeing such a rare animal in its natural habitat is something that is harder and harder to do each and every day.

I certainly hope the white lemuroid possum hangs in there, and that one day I can take my children to see this gorgeous little creature that calls the cloud forest home.