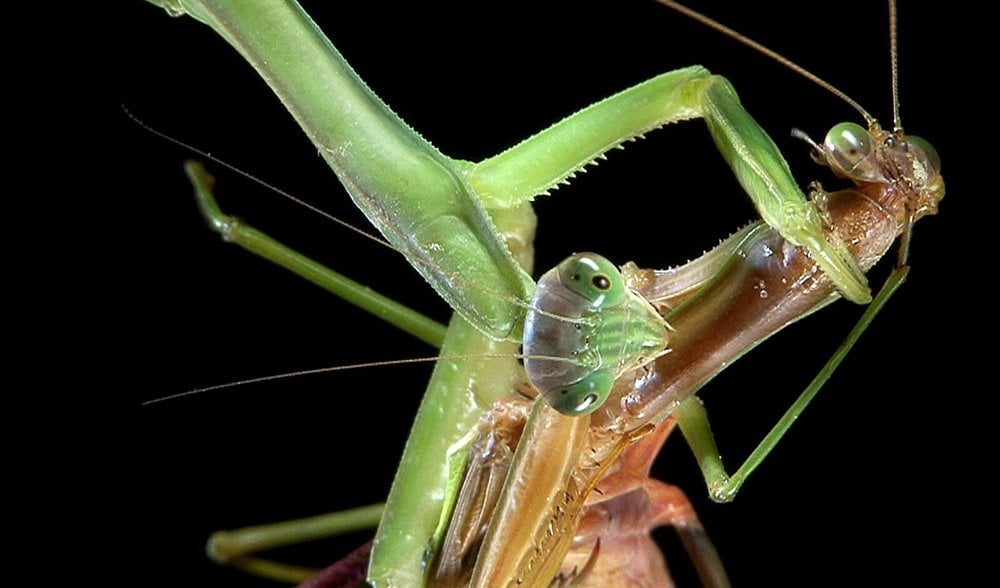 "It's for the best, I swear." Female praying mantis in the act of sexual cannibalism. Image credit: Phil Hastings
Reading Time: 2 Minutes • Print this page
When a female praying mantis eats the male after mating, it’s a good thing for the male. In evolutionary terms, at least.

SEXUAL CANNIBALISM AMONG female praying mantids may actually benefit males, in an evolutionary sense, according to a new study.

The research suggests that when a male mantis is eaten by the female after mating, more of the male’s body material is passed into the female, and in turn, a higher number of eggs are laid.

This also suggests there are genetic benefits to males that are eaten after copulation. Sexual cannibalism is common among mantids, and also occurs on a lesser scale among some scorpions and spiders. A headless male mounted on his mate. (Image: Phil Hastings)

Why do female praying mantis eat their mates?

To reach their findings, the researchers fed crickets armed with radioactive labels to a group of praying mantis (Tenodera sinensis), in order to make each insect individually traceable.

Males and females were then paired off for mating. After mating, half the pairs were allowed to progress to sexual cannibalism, while the rest were interrupted.

According to the findings, published this week in Proceedings of the Royal Society B, females that ate their mates produced an average of 51 more eggs than their non-cannibalising counterparts – that’s up to 25% more than the average clutch.

Thanks to the radio-labels, the team was able to trace how much of each mantis’s biology was passed on to the eggs. Interestingly, the eggs of females that ate their mates contained significantly more male-derived amino acids, and more biological material from the male mantis.

“When a female ate a male after a mating event, she was found to have around 17.7 per cent more of his biological material in her reproductive tissues, including her eggs and ovaries, than a female who only mated and did not cannibalise her mate,” explained lead researcher Kate Barry, a biologist at Macquarie University in Sydney.

There are a few hypotheses for the evolutionary reasons behind sexual cannibalism, said Kate.

“[One] hypothesis suggests that sexual cannibalism may arise strictly as an adaptive foraging strategy, providing females with nutrients that increase survival and/or fecundity.”

The subject of this study, however, is a more genetic hypothesis. “If males sire more, or ‘fitter’, offspring as a result of sexual cannibalism, and if males have little or no chance of mating again, the benefits of being cannibalised may far outweigh the loss of future mating opportunities,” Kate said.

Around 80% of male praying mantids escape cannibalism after mating, and Kate says more research is needed to establish what might prompt this outcome in some situations, and not others.

“Whether this is a mating strategy remains to be seen, although we can speculate that things like mate availability and the success of a single mating event might affect this,” Kate said.

Interestingly, Kate added that cannibalism is the female’s choice. “In all of the mantids I’ve studied, the female is making the choice to attack, and the biggest factors [affecting cannibalism] are female body condition and hunger.”