The eruption of Mount Ontake in Japan was sudden, even for volcanoes, with no prior warning signs
By AAP with AG Staff • September 29, 2014 • Reading Time: 2 Minutes • Print this page 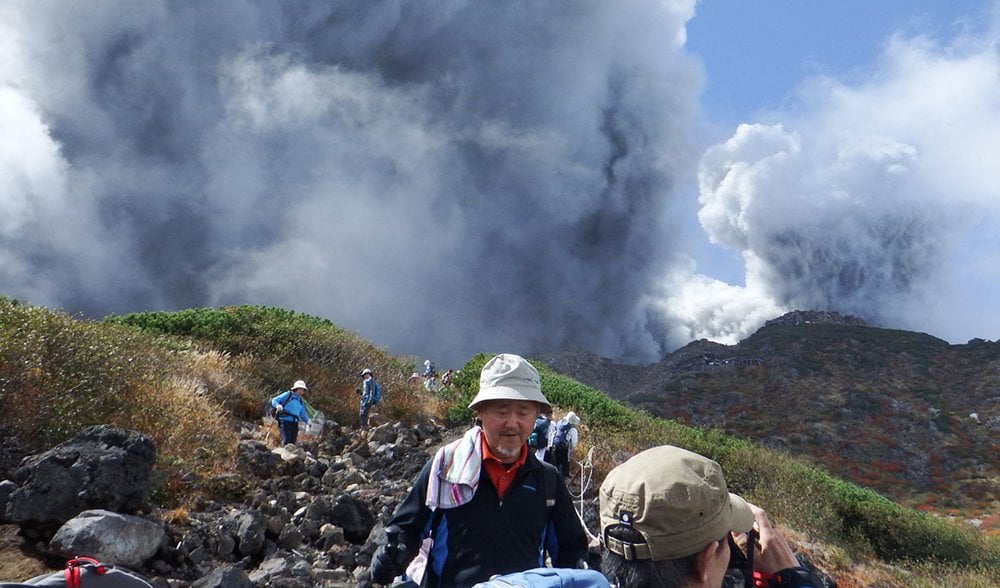 THE SUDDENESS OF THE eruption of Japan’s Mount Ontake volcano is an extremely rare phenomenon which makes it impossible to take precautionary measures.

After 35 years without a major eruption, the 3067m volcano in central Japan reawakened on Saturday, spewing a deadly blanket of ash, rocks and steam down slopes popular with hikers.

Rescue efforts are ongoing and the total loss of life has yet to be confirmed. Latest reports indicate more than 30 deaths, with dozens more injured in the eruption.

Ontake’s last major eruption was in 1979 and there has been no fatalities from Japanese volcanoes since 1991.

French volcanologist Jacques-Marie Bardintzeff, of the Universities of Paris-Sud Orsay and Cergy-Pontoise, says such sudden eruptions are rare.

“In general when a volcano becomes active, certainly after 30 or 40 years (of dormancy) which is short, we normally expect 24 to 72 hours of warning. The magma moves, micro-seismic movement is registered, there are changes in temperature.”

Normally that is enough time to alert people living in the area to evacuate or to ban access to the site in a tourist area, he said.

However, eruptions which occur with only minutes of warning are not unknown.

The Ontake eruption was not only sudden but was particularly dangerous as there were so many people about on a busy weekend.

“A combination of factors turn this into a catastrophe,” said Jacques-Marie, adding that there were different explanations for the unexpected eruption.

“The magma could have found a crack which allowed it to rise up in a single stroke. This is very rare.”

This video was taken from a hiker caught on Mount Ontake as it erupted. The pyroclastic flow can be seen billowing and collapsing down, raining ash on the hikers.

There is also another feared type of eruption called hydrovolcanic or phreatomagmatic eruptions.

“Often there are pockets of water in volcanoes. When the magma rises and a wave of heat accompanies it, the water can be quickly vaporised, creating high pressure like in a pressure cooker.

“If this pressure is greater than the resistance of the earth above it, all the rocks are pulverised into fragments known as cinder bombs.”

This type of eruption is particularly dangerous precisely because of the speed of events, with no real signs of what is about to happen.

“The monitoring of Japanese volcanoes is excellent,” said Professor Shane Cronin an earth scientist at Massey University in New Zealand. “There was some two-weeks of slight unrest before the event, but at a frequently active volcano such as Ontake, there is commonly seismicity associated with hydrothermal systems. The eruption was a true ‘blue-sky’ event in terms of not being preceded by major unrest.

“We are familiar with similar types of eruption at NZ volcanoes, such as 2007 Ruapehu and 2012 Te Maari/Tongariro. The suddenness of these eruptions is a real challenge for any monitoring technology. We have been very lucky in past situations in New Zealand to avoid such calamitous situations, although such blue sky eruptions remain a real possibility at both Ruapehu and Tongariro.”