Climbing crocs survey territory from above 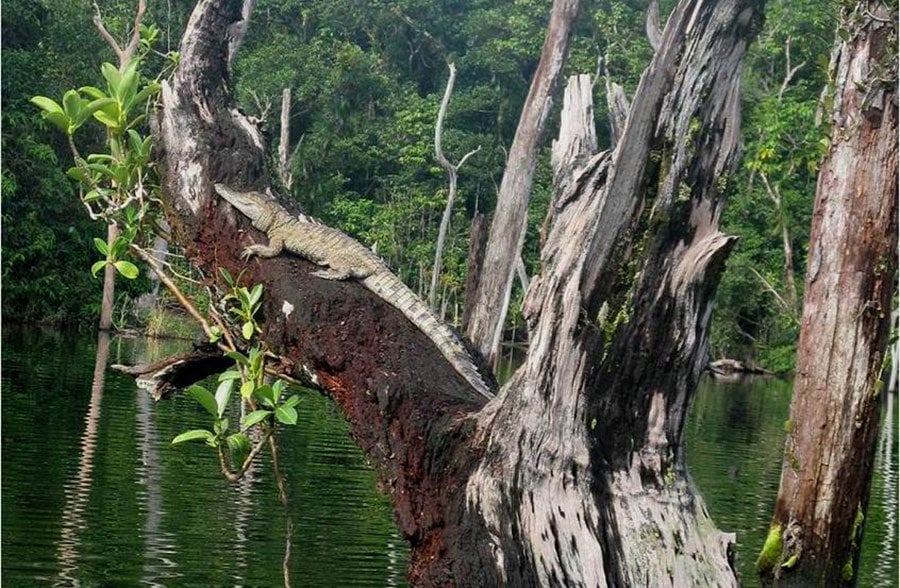 WHEN IT COMES TO avoiding a potentially fatal croc encounter in Australia’s Top End, most people would have their eyes on the water – but have you ever thought to look up?

Crocodiles are already known for impressive speed and agility around the water, but a new study published this week shows they are also capable of climbing trees.

“Nobody who has ever witnessed a freshwater crocodile run in a galloping gait would ever suspect them capable of such agility [in the trees], yet they are skilled at it,” says Dr Adam Britton, study co-author at Charles Darwin University in Darwin, NT.

The research, led by Dr Vladimir Dinets at the University of Tennessee in the USA, is the first to focus on climbing behaviours of crocodilians, a group also including alligators, caimans and gharials.

The scientists confirmed that four different crocodile species – found in Australia, Africa and the Americas – are all able to climb, some as high as 4m, where they were observed basking in trees.

Climbing abilities vary by species and also by size. Small, lightweight crocs, primarily juveniles less than 1.5m long, are able to reach the highest branches, while larger individuals are usually found on lower perches, no more than a metre above the water.

Australia’s freshwater crocodile can climb steep slopes, such as those along riverbanks, which saltwater crocodiles would have more trouble with. “Hatchlings of both species…can even climb vertical brickwork, which is the cause of occasional crocodile farm escapes,” Adam told Australian Geographic.

In addition to basking in the sun, wild reptiles may be using the perches to survey their territory. He argues that “crocs may be gaining height for surveillance purposes to look for predators, prey and other crocodiles that are competitors.”

People have little to worry about regarding attacks from above, though. In most cases, particularly during the day, the researchers found that the crocs were skittish and would rapidly slide off branches into the water when approached.

Professor Grahame Webb, a biologist and founder of Crocodylus Park in Darwin, says the findings are intriguing, but adds that he’s never seen any saltwater or freshwater crocodiles climbing trees in the way goannas and iguanas do.

“I have difficulty even imagining a crocodile several metres up in a mangrove,” he says.

The finding may have implications for the study of extinct animals from fossils, as little about the skeletons of living crocodiles suggests that they have climbing ability.

Dr Paul Willis, director of the Royal Institute of Australia, in Adelaide, is a palaeontologist who published research on the possibility of extinct tree-dwelling crocodiles in the 1990s. He says that the idea was met with bemusement at the time, so the new finding is a pleasant surprise.

“I was tickled to see new research addressing the possibility that now-extinct crocodile species could climb,” he says.

Adam agrees that the study “reminds us that living creatures may use their physical structures in surprising ways, expanding our thinking about…the capabilities of extinct species.”

The research is detailed in the journal Herpetology Notes.